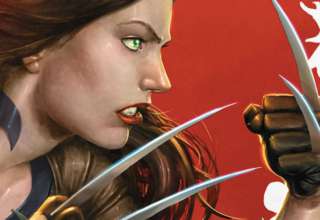 Mariko Tamaki and Juann Cabal bring Laura Kinney back to her roots in X-23 #1. She’s no longer Wolverine, she’s back to being X-23. That doesn’t mean Laura’s a killer again, though. Now, she’s taking the fight to various shady companies and scientists who wish to make more clones using Wolverine’s DNA. Along with her clone sister Gabby, she starts her mission. Tamaki does an awesome job picking up where Tom Taylor left off in the ALL-NEW WOLVERINE series. I’m a bit disappointed that Laura’s no longer Wolverine, but Tamaki softens the blow by delivering a captivating first issue. Cabal adds to the excitement with some truly amazing looking panel layouts.

The Female Body, Cloning, and (Bio)terrorism in X-23: INNOCENCE LOST

The issue opens with Laura and Gabby taking down some armored, possibly mutant assailants who stole mutant genetic testing DNA. Laura believes they’ll be using the DNA for nefarious purposes. We then learn that she’s been dedicated, as of late, to stopping scientists with ill intent from using stolen vials of Wolverine’s DNA for genetic testing. It’s what created Laura, as well as Gabby, and she’s dedicated to making sure no one else has to endure the torture she did at the hands of evil cloners. At the X-Mansion, Laura runs into the Stepford Cuckoos, however, they act very strangely to the Kinney sisters. Why were they acting this way? Pick up X-23 #1 to find out!

The one thing about this issue I wasn’t too fond of was the characterization of the Cuckoos. In prior X-MEN books, they went through loads of character development. The three sisters stopped acting like a hive mind and all gained separate personalities. This is slightly hinted at in X-23 #1, but, for the most part, they’re back to acting like a hive mind again. I have faith that Tamaki will address this in later issues, though, since they’re going to be a large part of this first arc.

When this series was first revealed, I was initially wary. I liked what Tom Taylor did in making Laura into a hero who moved past her violent roots. It felt like a step back for Laura to become X-23 again, which was a dark part of her past. However, Tamaki allayed these fears this issue. For one, Tamaki does a fantastic job characterizing Laura in X-23 #1. She may be back to using her old codename, but she sure isn’t acting like she used to. She’s still the same heroic, Logan-esque person she became in ALL-NEW WOLVERINE. She’s not the stoic, ashamed former assassin she used to be. Now, she’s more confident in herself and her abilities.

Plus, her mission fits in with her character perfectly. It’s what Laura started doing at the beginning of the Taylor series, and she’s picking up where she left off. I was mainly afraid that Laura would slip back into her bloodthirsty killer persona again, but Tamaki really proved me wrong. In fact, at one point in the issue, Laura makes a point to knock out a bad guy when she could have easily killed him. That one moment proves that Tamaki will write a phenomenal Laura.

My favorite part of this issue has to be the first page. Tamaki’s writing, as well as Cabal’s art and panel layout, makes it one of the most memorable pages in X-23 history. It’s a very quick retelling of Laura’s origin. Tamaki does for Laura what Grant Morrison did for Superman in the prologue to ALL-STAR SUPERMAN. It’s an iconic page which gets to the heart of the character in only a few dialogue boxes. It goes through the basics of how Laura become who she is. Tamaki deserves praise for this one page.

Cabal makes this page memorable with his artwork. It almost feels like a storyboard for the opening of an X-23 film. The way he zooms into the “X” and how it transforms into Sarah Kinney’s ultrasound is masterful work. It’s so cinematic, which makes it stand out to me. Of course, I can’t leave out color artist Nolan Woodard. The splashes of bright red among the drab, nearly colorless backgrounds look just beautiful. I can’t stress enough how much I love this page.

X-23 #1 seriously surpassed my expectations. Tamaki proves that she’s the right person to write Laura. Cabal makes the book look stunning. Despite a minor continuity issue with the Cuckoos, the issue still stands out as exemplary. To all X-23 fans who saw LOGAN and want to learn more about her character: look no further than this issue.