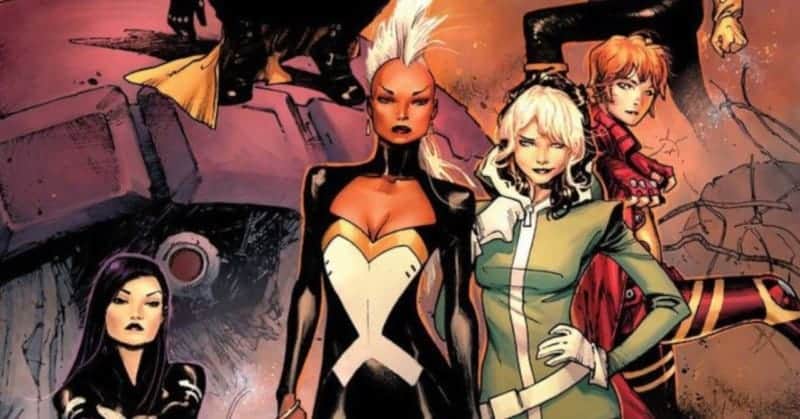 The X-Men are one of Marvel’s biggest mainstays. The mutant superteam stands as a metaphor for any marginalized group. They’ve been a cultural milestone since their inception in the 1960s and have evolved with the decades, reflecting many different peoples over time. However, X-MEN put one group at the center of their history and have done so in relative silence. Team name aside, X-Men’s female characters have been point blank for some of the comic’s greatest work. Famous storylines have revolved around women, and the comic has produced some of Marvel’s most beloved female characters. X-MEN deserves praise for its meaning to many groups. However, its history with women is worth noting.

The X-Men began in the 1960s and largely conformed to the times. The team comprised four white men with only Jean Grey beside them. This led to cliche shenanigans, such as the others focusing on Jean’s appearance until she demonstrated her powers. Those kinds of problems dogged the original X-Men and hampered their meaning. A team of mostly white men fighting for equality seemed off the mark in the racially charged era. It’s likely part of the reason the original book was canceled.

However, the 1970s saw a revival with GIANT SIZE X-MEN #1, with a much more inclusive team taking over. This included Storm, the X-Men’s first female African member. While Storm was still the only woman on the team at first, her introduction was extremely important for African-American women. The team gained another member later in Kitty Pryde, who was the first Jewish woman in X-MEN. However, it was the founding female member that started X-MEN towards promoting strong women.

The prelude to what is arguably X-MEN’S greatest story, 1976’s “Phoenix Saga” draws the team into outer space and beyond. Founding member Jean Grey becomes possessed by a cosmic entity called the Phoenix, a literal fire-bird born from the energy of creation itself.

Because comics are weird sometimes

The Phoenix begins as a guardian entity, helping the X-Men defend the universe from the Sh’iar emperor D’Ken. This shift pushes Jean away from her beginnings as simply the ‘girl on the team’. She is more powerful than all the other X-Men, even Professor X. She becomes the most important member, and the team would not have survived its time in space without her. However, Jean begins to enjoy the power she has, while the Phoenix becomes corrupted by human emotions. Soon after, the efforts of Mastermind creates Dark Phoenix, who revels in destruction.

Her time as Phoenix pushes Jean Grey into legendary status in X-MEN lore. The writers chose to take the power of creation and destruction and place it in a woman. The metaphor is obvious (women can both create and take life, unlike men), and it made the Phoenix seem even more powerful. This focus helped to create one of X-MEN’s best stories. While Jean Grey was empowered to an extreme level, her status opened the door for women to be strong in less cosmic, but just as important ways.

“Days of Future Past”

After Jean Grey, X-MEN continued to build female characters with 1981’s “Days Of Future Past.” Taking place in a future where mutants are hunted to near-extinction, the remaining X-Men choose to send an adult Kitty Pryde back into the body of her younger self. The older Pryde has to warn of events that will lead to this dark future. The entire premise of this story is amazing, but what it means for Kitty Pryde is tremendous.

The future X-Men have only one shot to prevent a terrible future. They choose to send Kitty, which means she is the most capable person for this mission. And think on what that mission is! Kitty has to become a teenager again and convince her teammates that she is actually an older version of herself. Kitty has proved herself capable in stories such as “God Loves, Man Kills,” but she had only just joined the X-Men. The fact that her older self in “Days of Future Past” is confident enough that she could succeed speaks volumes towards her significance to the future of mutants.

It’s also important to note the creators didn’t choose a male character like Wolverine for the role (cough, cough, Bryan Singer). A male character might arguably have an easier time going into an adult body in the past. Instead, the creators chose a fourteen-year-old girl that had only been part of the team for a year and made her the center of the story. It showed writers putting faith in a female character and built on the female empowerment of “Dark Phoenix Saga.” It’s not only indicative of Kitty’s future importance to the team but also a showcase for the potential of X-MEN’S female characters. It was a route X-MEN would continue to expand on over the years.

10 Badass Jean Grey Moments That Will Make You a Believer

X-MEN used these storylines to develop Jean and Kitty, but they were not the only recipients of the push. In UNCANNY X-MEN #139, Storm becomes leader of the X-Men following Cyclops’ temporary departure. The longtime white/male leader being replaced by an African woman holds great symbolism. However, writers built her character over time, giving her a backstory as an orphan in Cairo and a crippling case of claustrophobia. These elements make Storm into a more complex character, and her leadership role (which she has retaken many times) helped mold her further. She even becomes Queen of Wakanda, ruling the country alongside Black Panther.

Other women continued to grow in X-Men. Marvel developed teams such as NEW MUTANTS (1982) and  GENERATION X (1994) that featured many female characters. X-Men favorites like Jubilee, Husk, Wolfsbane, Danielle Moonstar, Magik, and Boom-Boom all debuted within the pages of these new teams. In fact, the teams often contain more women than men. However, that attitude wasn’t surprising. These stories built on the strong women of previous years, moving women from token members to a more equal footing. This was also reflected in the maturing ideas X-MEN promoted.

The themes of X-Men (mutants banding together against a fearful world) eliminates any real need for gender battles. This theme of family helps the team members be seen as equals. Both GENERATION X and NEW MUTANTS show the teams as close friends, who rarely see gender as a barrier. As a result, fans are able to see the women on the teams grow and mature without the kind of cliches that plague the early X-Men comics. Many female members move on to explore unique territory: Jubilee became an adoptive mother and Moonstar became a representative for the real-life Cheyenne Native American Tribe in comics.

Women in X-MEN continued to make major strides as time moved forward. Characters like Emma Frost become more prominent and the ranks of the team swelled with new female characters. However, women took on a new role in the aftermath of the 2005 HOUSE OF M storyline. This story has the mentally scarred Scarlet Witch create an alternate reality where mutants were the dominant species.

In HOUSE OF M, the whole of the Marvel universe is remade and reshaped, with Magneto ruling over the world. However, a new character named Layla Miller (another fourteen-year-old girl) helps certain heroes like Wolverine and Spider-Man learn the truth. Just like Kitty in “Days of Future Past”, Layla (with help from Emma Frost) allows these select heroes to prevent a terrible reality. The aftermath of HOUSE OF M causes Scarlet Witch to return the world to normal after de-powering most of the mutant population. The search for new mutants becomes the utmost priority. Mutant children are no longer born, and the race was in danger of dying out.

However, the mutant ‘messiah’ is soon found…

It’s a girl… and a redhead….again.

The writers chose to have the first mutant born after HOUSE OF M to be a girl. It was a strong decision to place a female as the savior of the mutant race, and it was well received by X-MEN fans. Cable becomes the child’s guardian and brings the child through time. This presents a unique opportunity for readers, as we are able to see Hope grow up at a somewhat accelerated rate.

Cable raises the baby over seven years, along with a woman named Hope (the baby’s namesake). They are constantly hampered by efforts to kill baby Hope, but she is eventually returned to modern times. Because the effects of time travel allow fans to watch Hope develop and mature at a much faster rate, we see Hope deal with the death of her ‘mother,’ her struggles just to survive, and eventually, her desire for normalcy (despite being a Messiah and a recipient of the Phoenix Force).

These are strong, compelling stories that build Hope into a strong female presence. Hope becomes one of modern X-Men’s most important characters because of strong story and character. It follows in the tradition of Storm and Kitty while bringing it to a new level. It’s an important move that the X-Men have continued to make in today’s world.

The Impact of Modern Women in X-MEN

The modern X-MEN series continues to showcase women. Each faction of the modern team comprises many women. X-MEN BLUE and X-MEN RED are led by two versions of Jean Grey; one is a resurrected modern version, the other a younger version brought back from the past. The fact that this is so easily accepted by fans is a testament to the importance of this character, while also allowing for two different versions to exist. It’s a clever way to gain two perspectives that are still linked.

Again, because comics are weird.

Other significant members of X-MEN’s past have grown into leadership roles. Kitty Pryde has a prominent presence throughout her history with the X-Men, ultimately assuming Charles Xavier’s role as leader of the X-Men in ALL-NEW X-MEN (2012). Since then, she has even served as Star-Lord in the Guardians of the Galaxy, before returning to Earth to lead once again in X-MEN GOLD. Kitty Pryde’s long history also includes advocating for mutant rights as well as for her Jewish heritage, as seen in “Days of Future Past” to the current day. Kitty is arguably the most developed character in X-Men. She has essentially grown into the type of woman predicted in “Days of Future Past.”

However, the most striking change may be a relatively new character, X-23 (Laura Kinney). The clone of X-Men legend Wolverine, Laura assumes Logan’s cowl after his passing, in a well-received solo series, ALL-NEW WOLVERINE. Laura became a symbol of survival, enduring merciless training, programming, and torture by Weapon X. Her emergence into a beloved torch bearer continues Marvel’s recent trend of women in classic roles (see Thor, Ms. Marvel, Captain Marvel). It also makes her a strong addition to X-MEN’s legacy of women.

The Origins of X-23: Objectification, Rape, and Redemption

The Legacy of the X-Women

X-MEN’s stance for mutant equality reverberates into gender equality, showing that everyone can become something great. The team has grown to be far more inclusive, with members of different genders and races comprising the teams and leading the charge. It’s especially amazing considering this team started as four white guys and one girl. The X-Men have come to represent all kinds of people, strengthening the message of what they are fighting for.

It’s not mutant equality, but it’s a hell of a start.