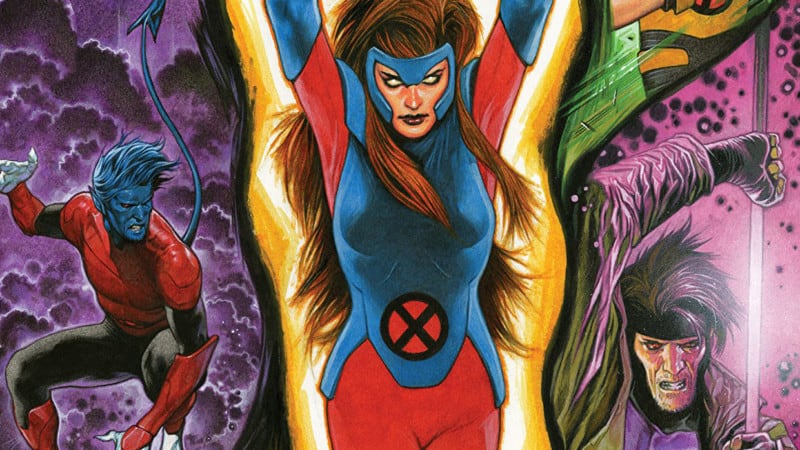 Jean Grey made her epic return months ago in Matthew Rosenberg’s PHOENIX RESURRECTION, but she never got the chance to mourn deaths, meet new friends, and catch up on the millions of things that have happened since her death fifteen years ago. Instead, she shows up in X-MEN RED #1 completely acclimated to this new world. Until X-MEN RED ANNUAL #1, writers have overlooked Jean’s adjustment period between PHOENIX RESURRECTION and X-MEN RED. But, thankfully, writer Tom Taylor and artists Pascal Alixe and Chris Sotomayor finally answer what we’ve all been wondering: how does Jean Grey react to a world so different than the one she left?

The short answer: surprisingly well. If you want the long answer, keep on reading.

Someone New, Someone Old, and Someone from an Alternate Reality

The basic premise of X-MEN RED ANNUAL #1 is simple: Jean is back and she has a whole lot of people she needs to visit. She takes her time saying hello to the X-Men and visiting the school that was named after her (which realistically freaks her out). But, this issue isn’t about Jean reconnecting with the X-Men she’s always loved. X-MEN RED has already shown Jean rebuilding those relationships in past issues. X-MEN RED ANNUAL #1 is about Jean meeting with those closest to the men she once loved — i.e. Cyclops and Wolverine. Since they’re both gone, she finds their closest relatives: her “daughter” Rachel Grey and Wolverine’s clone Laura Kinney.

The Past Resurfaces in X-MEN RED ANNUAL #1

I knew, before reading X-MEN RED ANNUAL #1, that Taylor would have to somehow broach the Rachel problem. I also knew it would be tremendously difficult. Even before Jean’s death, Rachel and her alternate-dimension mother struggled to bond. They’re family…but they’re also not. Their relationship is so complicated emotionally that many writers shied away from it in the past. It just seemed too big and unwieldy to manage.

Taylor also finds it unwieldy but he’s still willing to encounter it. So much time has passed since Jean and Rachel talked, so at first their interaction is a little awkward. They struggle to say even a fraction of what they’re thinking. So, they don’t say anything. Instead, they use something that both of them understand better than words: telepathy. Taylor uses telepathy to make Jean and Rachel’s meeting — which could take up an entire issue itself — more manageable. By opening their minds to one another, they’re able to “say” everything they need to without relying on dialogue blurbs.

This is such an ingenious use of Jean and Rachel’s shared powers and a seemingly clever way to avoid writing about their strange mother-daughter bond. Personally, I don’t think Taylor is avoiding the subject like past writers have. True, Taylor doesn’t let in on what they’re saying to one another telepathically. But, that’s what makes it such a special moment. Two telepaths letting down their defenses for one another is a huge deal. Using telepathy, they’re revealing to each other things that go beyond words. Their relationship isn’t normal by any means, but Taylor is trying to make it work via one of the few things that connects them.

No Rest for Jean Grey

Along with covering a meeting with Rachel in X-MEN RED ANNUAL #1, Taylor also includes Jean’s conversations with Laura, Old Man Logan, and Black Bolt. Oh, and Nightcrawler. And Chad Townsend. And a ton of other people. Annuals are supposed to give readers a lot to chew on, but Taylor almost takes it to the extreme here. Jean has a lot of catching up to do, but I wonder if putting all of those meet-ups into one issue (which covers one day) was a good idea.

Jean rejecting the Phoenix is an emotional event that warrants a little down time. And yet she immediately comes out in X-MEN RED ANNUAL #1 fiercely determined to meet with as many people as possible and solve every mutant-based dilemma. Of course Jean would want to talk to some people and get the scoop on the past fifteen years. But she would probably also want some private time to mourn Wolverine and Cyclops. After such a traumatic event, who wouldn’t want some alone time?

The scene where Jean violently tells off a mutant-hater mere moments after her return from the Phoenix egg feels particularly unnatural. All of X-MEN RED is about Jean’s reactions to bigotry. In an issue that is trying to accomplish so much, that point is unnecessary. The focus of this issue is on Jean’s relationships. Deviating from that theme means there’s less time for Jean’s already rushed conversations.

Penciller Pascal Alixe and colorist Chris Sotomayor give X-MEN RED ANNUAL #1 an almost ethereal feeling — as if everything that happens is all part of a dream. While this may sound positive, I don’t really mean it in a positive way. Alixe’s lines are delicate but they’re also frequently unnatural and distorted. While sometimes his faces perfectly express unsaid words (he nails Laura’s steely expressions), at other times they’re forced and strange. The combination of Alixe’s thin line work and his abnormal style makes this issue feel like it’s taking place somewhere in-between reality and dreamland.

Sotomayor’s colors are fiercely bright and saturated — almost too much so. On top of Alixe’s lines (which are fragile compared to most artists’ bold inks) Sotomayor’s colors dominate. Once again, I think this creates an otherworldly feel. These bright colors usually look okay in comics because of dark lines which control the color. Without that sort of thick line work, the art lacks both realism and normal comic aesthetics.

Since the events in X-MEN RED ANNUAL #1 are sort of dreamlike in that they occur in the past (and could be read as Jean’s memories) the strange art makes sense. Although it isn’t quite what I would have wanted in such an important issue, I definitely see why Marvel chose Alixe’s unique style.

X-MEN RED ANNUAL #1 has a lot to say and, for the most part, it does a good job. Taylor finds some creative usages for Jean’s telepathy (her “conversation” with Black Bolt is especially clever) and he tells a story that a lot of readers are curious about. Any Jean Grey fan will find X-MEN RED ANNUAL #1 a worthy read — solely because it’s such an important point in her history as a character. But, from a critical point of view, Taylor strove too far with this issue. One issue can only say so much and Taylor presses that limit.

Still, as someone who appreciates a good resurrection arc, I think this issue does encapsulate Jean’s dueling emotions of hope and sadness. Without the Phoenix, Jean is a new person and that excites her. She wants to change the world and show everyone that Jean Grey — sans Phoenix — is a good person. But, at the same time, she still has to deal with the pain of losing time and memories.

Taylor starts Jean’s journey of self-discovery in X-MEN RED ANNUAL #1, but ultimately it’ll be the upcoming issues of X-MEN RED that expand on this. If you’re as dedicated to the ever-expanding (and slightly confusing) story of Jean Grey, make sure to pick up X-MEN RED #5, on sale June 6th!