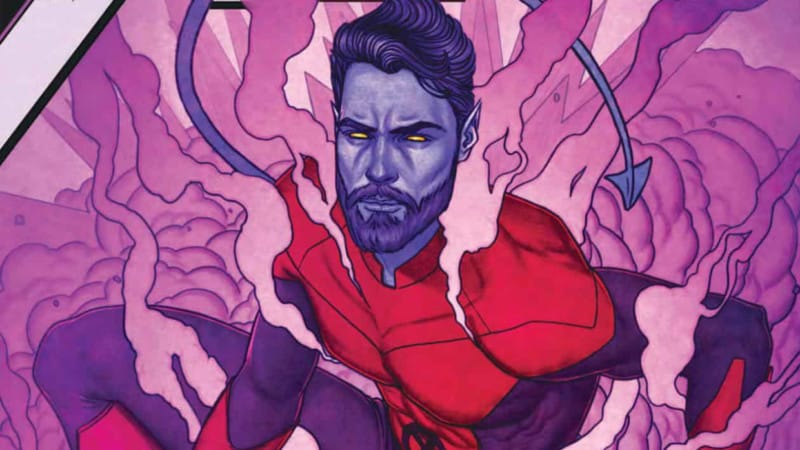 It’s (sort of) a Grey family reunion in this week’s X-MEN RED #9! Cassandra Nova pits Rachel against her “mother,” and the results aren’t pretty. Writer Tom Taylor and artists Roge Antonio and Rain Beredo bring a lot of action and strong words but surprisingly little substance in the latest installment of the brilliant politically-minded series. While X-MEN RED #9 is rooted in the right ideas, it fails to bring the excitement earlier issues brought. This series is the definition of a slow-burn, but after nine issues, that burn is close to fading completely. 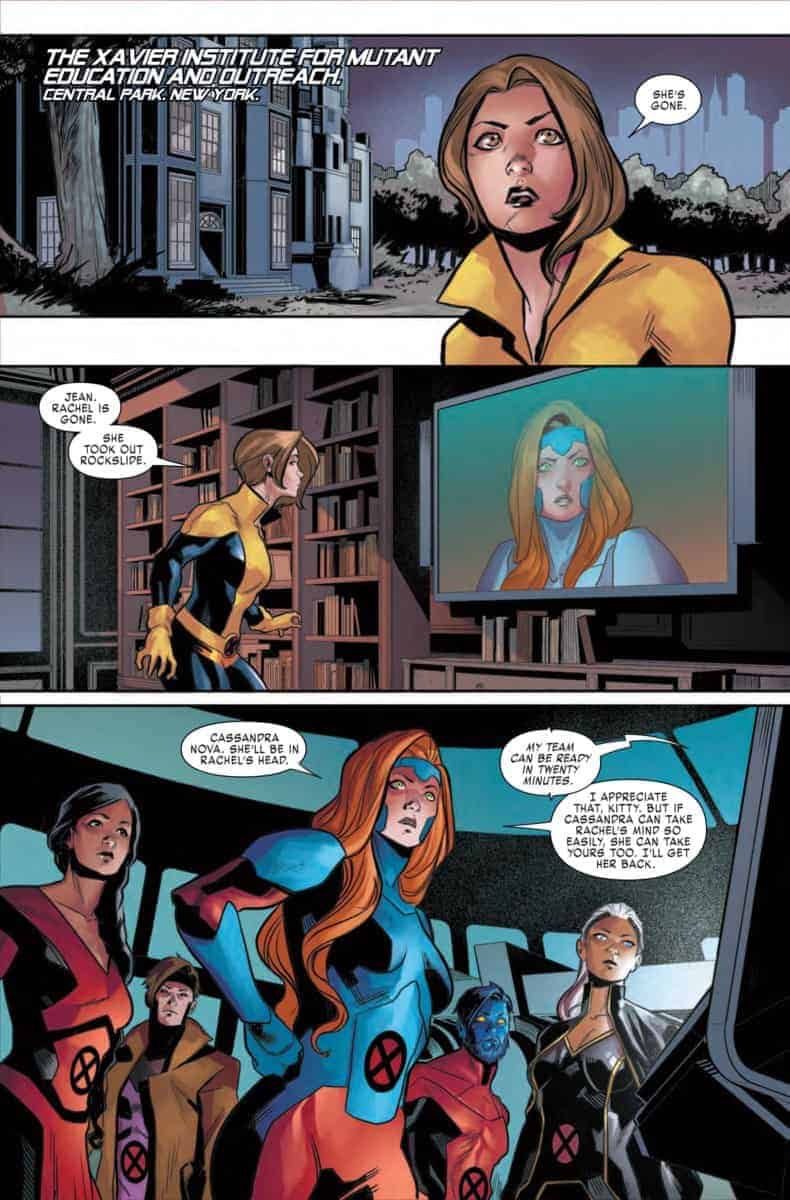 The confrontation we’ve all been waiting for is finally here! Jean Grey faces off against her (at the moment) greatest nemesis: Cassandra Nova. With Rachel in chains, Jean has no choice but to face the bald villainess, even if it means going into the fight without her teammates. Her sort-of-kind-of daughter’s life is on the line, after all. For most of the issue, Nova seems to have the upper hand…until Jean reveals that she’s not so easily fooled. After dealing with Nova for eight issues (plus a whole series in 2001), Jean knows her opponent well.

We haven’t seen Rachel and Jean interact much, except in the X-MEN RED ANNUAL #1, and even then it was pretty brief. When I saw the title of the issue — Grey vs. Grey — I thought for sure we’d get some great dialogue between these two. They have one of the most complicated relationships in the X-Men franchise, so they deserve a little on-panel bonding. 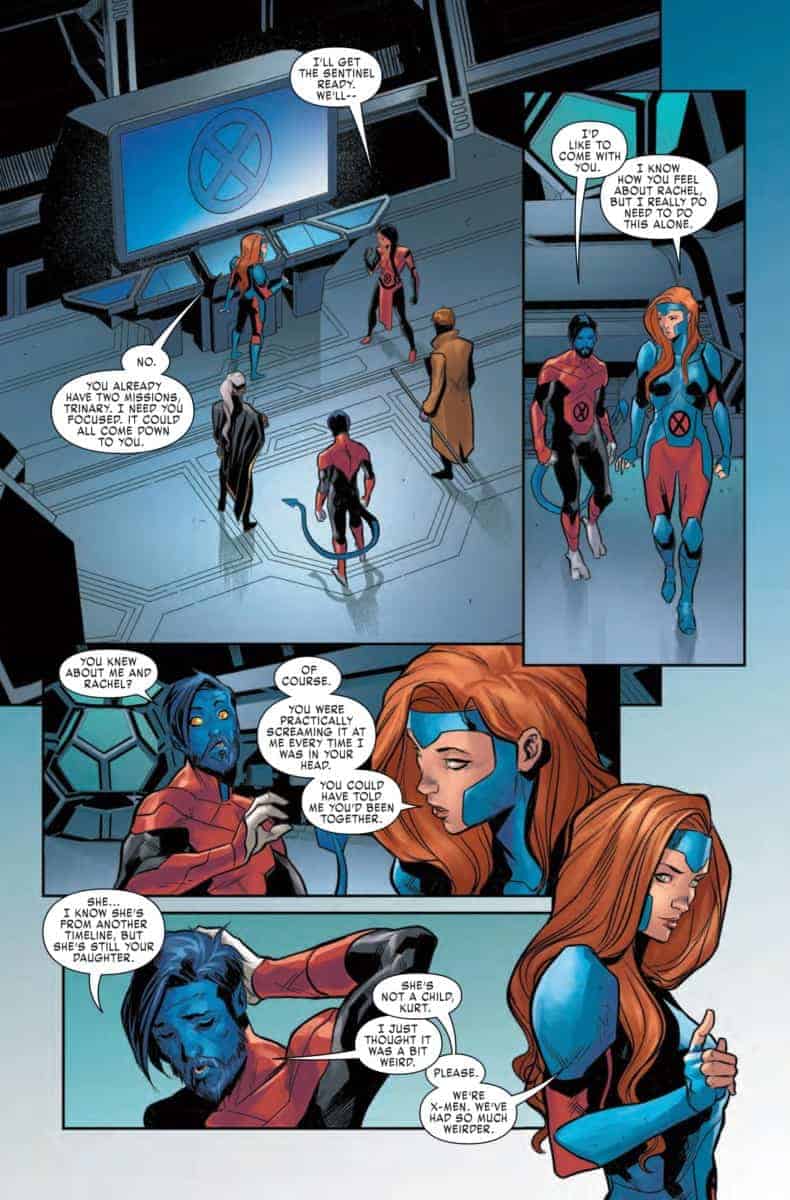 Unfortunately, we don’t really get that at all. Jean’s fight against Rachel is super quick and quiet. They have a short heartfelt moment, but just as it’s starting to get deep, Nova’s story takes back over. I get it — this arc is about Nova. She’s the villain. Honestly, Jean’s dialogue with Nova is incredibly strong and powerful. Still, Rachel and Jean’s relationship is something a lot of fans want to see more of. At least we get to see Jean calling Rachel her daughter. That’s kind of a big deal for Jean.

We may not get much Rachel characterization in X-MEN RED #9, but we do get a sweet scene between Storm and Jean. Sometimes, fans forget just how close these two are. Scenes like this one that are full of witty, best friend lines are perfect reminders of their relationship.

Jean’s final words in X-MEN RED #9 (“we’re going to war”) should hold a lot of weight. Going to war isn’t a light sentiment. However, because the past few issues of the series have ended with similar mantras (“We’re going to weaponize the truth” in #5), it’s just not as powerful. Jean and her team have been going at Nova “full force” for a while now, and yet the plot seems to be progressing at a snail’s pace. I appreciate Taylor’s attention to detail and want to explore every angle of Jean’s moral code, but there comes a point when things need to move forward. 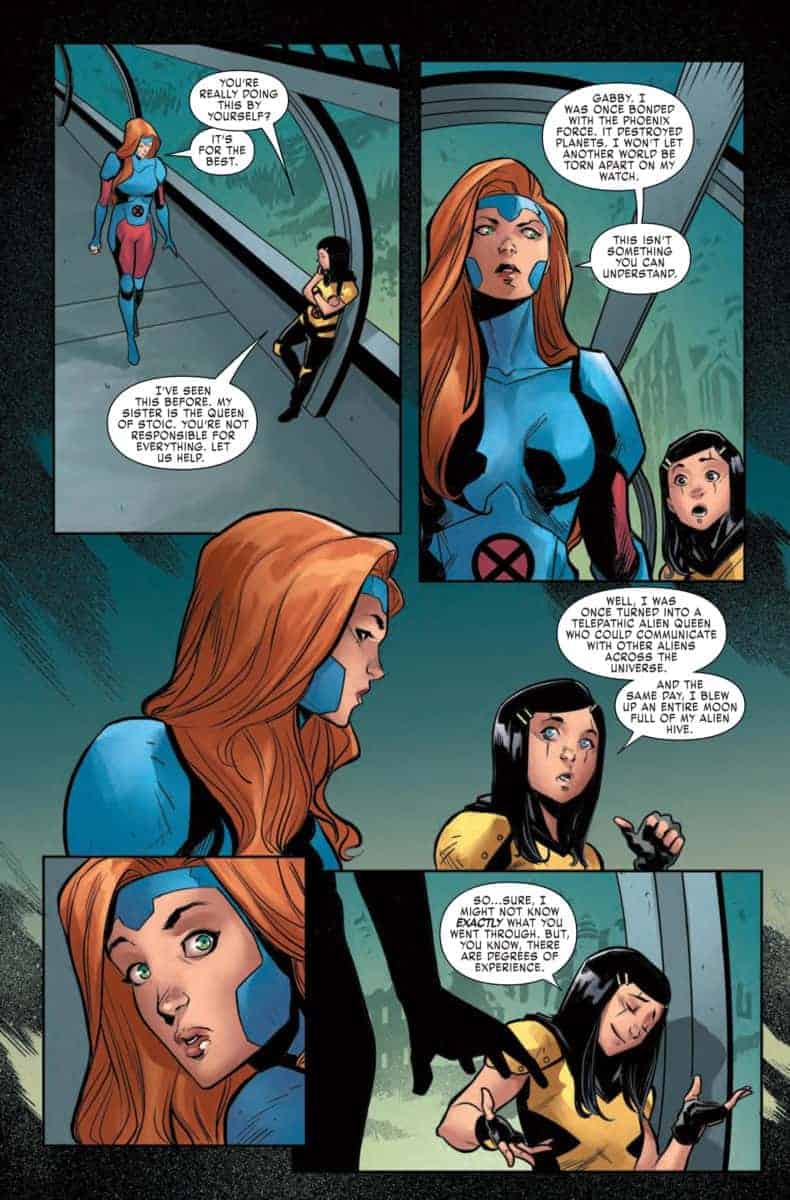 In NEW X-MEN, Nova’s arc lasts many, many issues, but that’s because Morrison was dealing with a huge cast of characters and a larger setting. X-MEN RED is about one team and, more precisely, about one character: Jean. I’m a huge Jean Grey fan, and I love seeing her in all her overdramatic greatness (and in this issue she is fantastic). Still, I’d like for a bigger picture to evolve in X-MEN RED. What’s going on in the other characters’ personal lives? How is Jean adjusting to dealing with other X-Men members again? This series is so removed from the other X-titles that it could quickly go from politically woke to stale and boring.

Another issue, another artist! In tradition with all the X-Men titles, X-MEN RED sees yet another artistic change in X-MEN RED #9. Changing the penciller mid-arc isn’t my favorite thing in the world, but Roge Antonio’s artwork isn’t what makes this issue unsuccessful. His version of Jean is truly gorgeous (with those giant shoulder pads and flowing mane), and his ability to create intense drama using perspective is more than noteworthy. This issue has some serious failures, but the change in art isn’t one of them.

X-MEN RED is a fantastic series. At the moment, it’s my favorite X-title. X-MEN RED #9, however, falls below what I’ve come to expect from Taylor. Jean is great (as always), but the plot of the series is way too slow.

On top of that, Taylor practically ignores Rachel’s character, even though her relationship with Jean is something a lot of fans (myself included) want to see. To keep this series at the top, Taylor needs to give his characters some worthy side stories or put the whole plot on overdrive. UNCANNY X-MEN is coming, and I’d hate for this series to fall into the same forgotten bin as X-MEN GOLD and X-MEN BLUE.