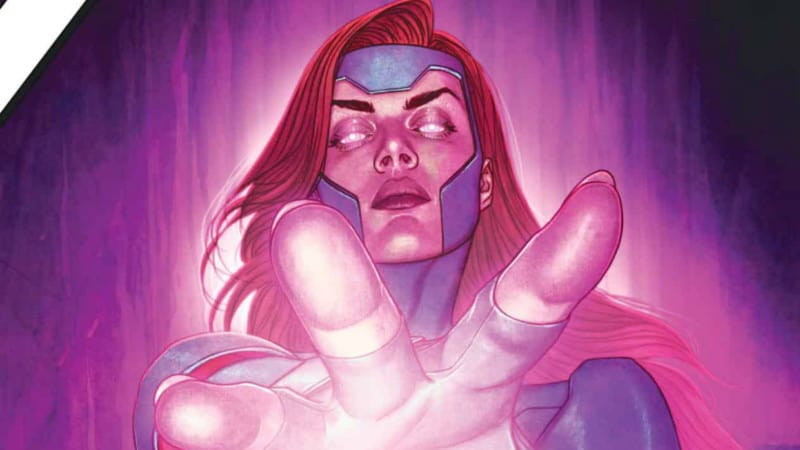 With only a few issues left in the series, X-MEN RED #10 finally digs into the nuts and bolts behind the eventual battle between Jean Grey and Cassandra Nova. Writer Tom Taylor ups the stakes by creating what is essentially a “prepping” issue. While not action-packed by any means, the issue highlights what it takes to defend the world from a mammoth threat like Nova. Artists Roge Antonio and Rain Beredo deliver another solid (but not stand-out) performance that helps to bring this issue from good to better. Not all comic fans will enjoy X-MEN RED #10 because it does lack a lot of key comic-book aspects, but for fans of the X-Men (and, more importantly, Jean Grey) this is a must-read. 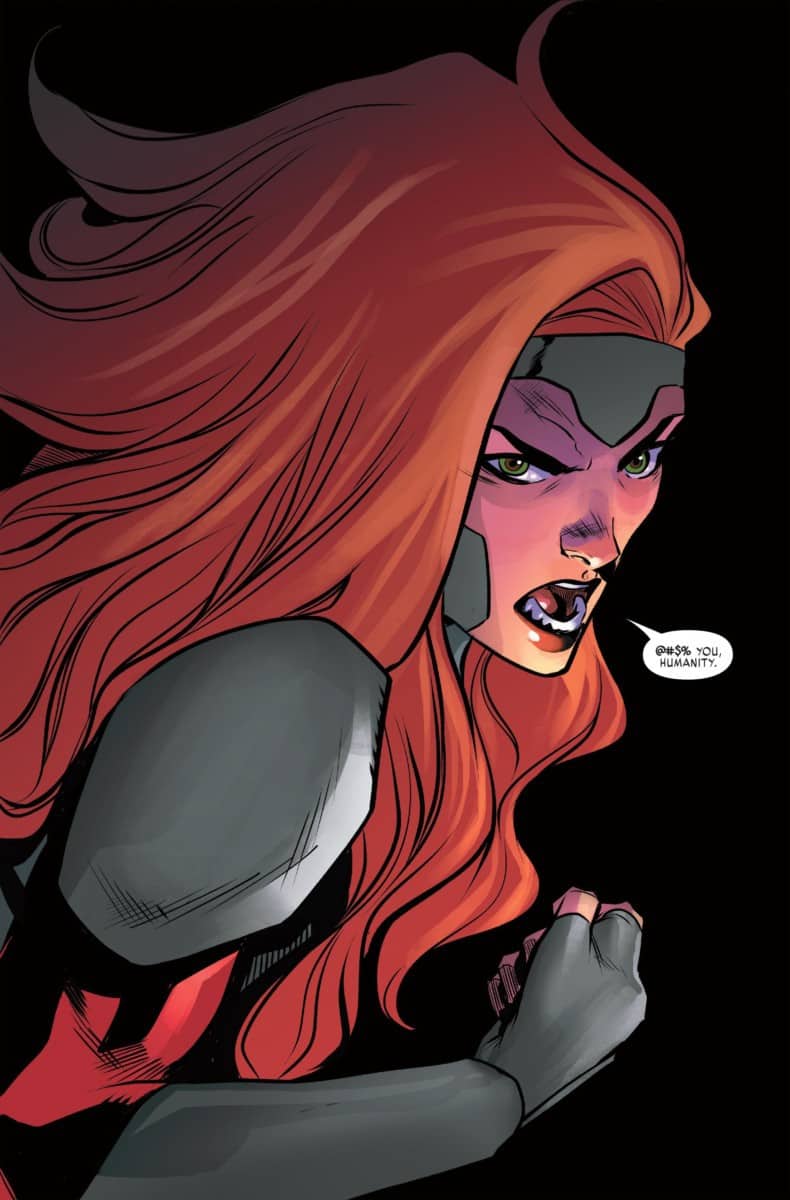 Preparing for Battle in X-MEN RED #10

We’ve known it’s been coming for a long time but, finally, it’s here. Sort of. The epic battle between Cassandra Nova and Jean Grey is nearing its apex in X-MEN RED #10. In a last-ditch effort to gain Jean’s attention, Nova creates a fake video of Jean taking full responsibility for an act of mutant terrorism. The gimmick doesn’t stick in the press thanks to Trinary, but it does force Jean to realize that the time has come to face Nova once and for all. With Tony Stark’s help, Jean implements an ingenious plan that could see a broken Nova in X-MEN RED #11. 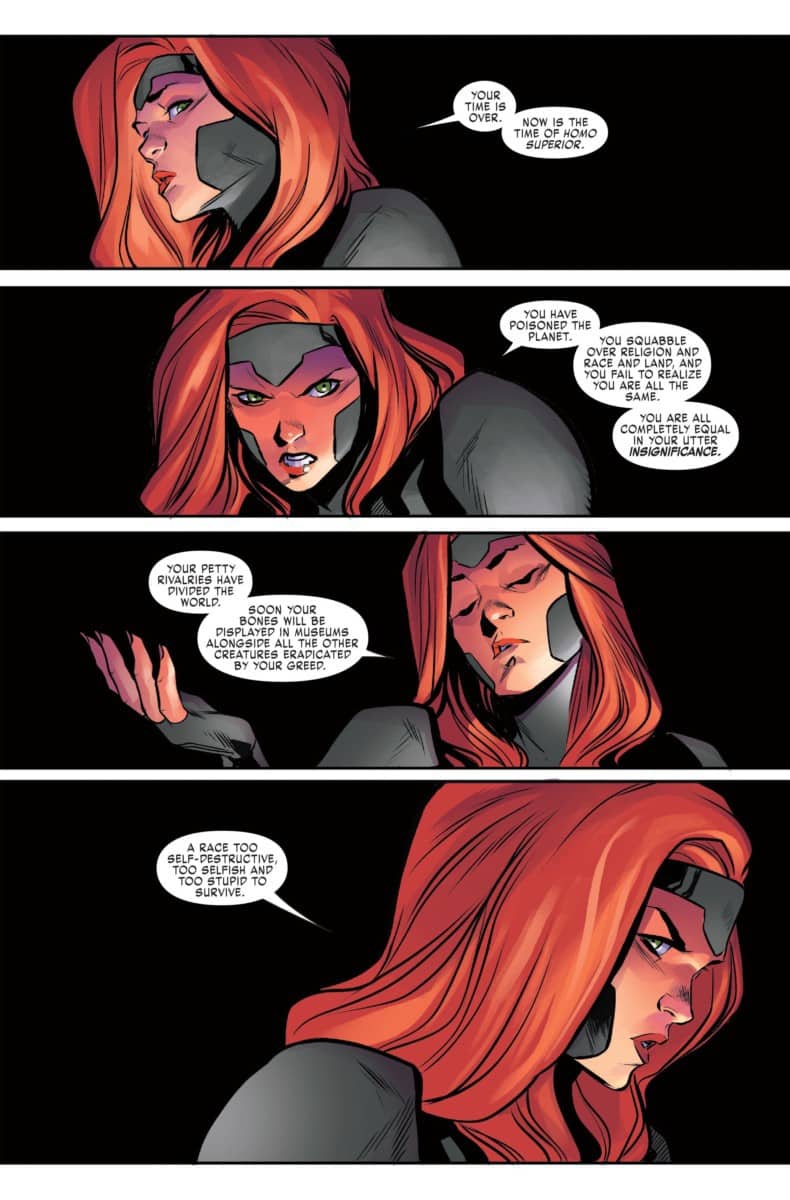 One of my biggest issues with X-MEN RED thus far has been the distance from other characters in the Marvel universe. The closest we’ve gotten to breaking away from the X-universe were the few panels featuring Black Panther, but even those were pretty paltry. With a threat as monumental as Nova, you would think some of the other heroes on Earth-616 would take notice. In X-MEN RED #10, they finally do.

Jean calling on Tony Stark to manufacture an army of Magneto helmets was brilliant on Taylor’s part. It’s a needed reminder that the X-Men don’t live in a bubble, where only humans and mutants exist. There are other superhero folks out there who are (for the most part) willing to help their cause. In the last few panels of the issue, Jean meets Captain America and the other Avengers on Genosha. I know I’m not the only one who really wants to see Jean and Steve kicking ass together on the battlefield in the next issue. 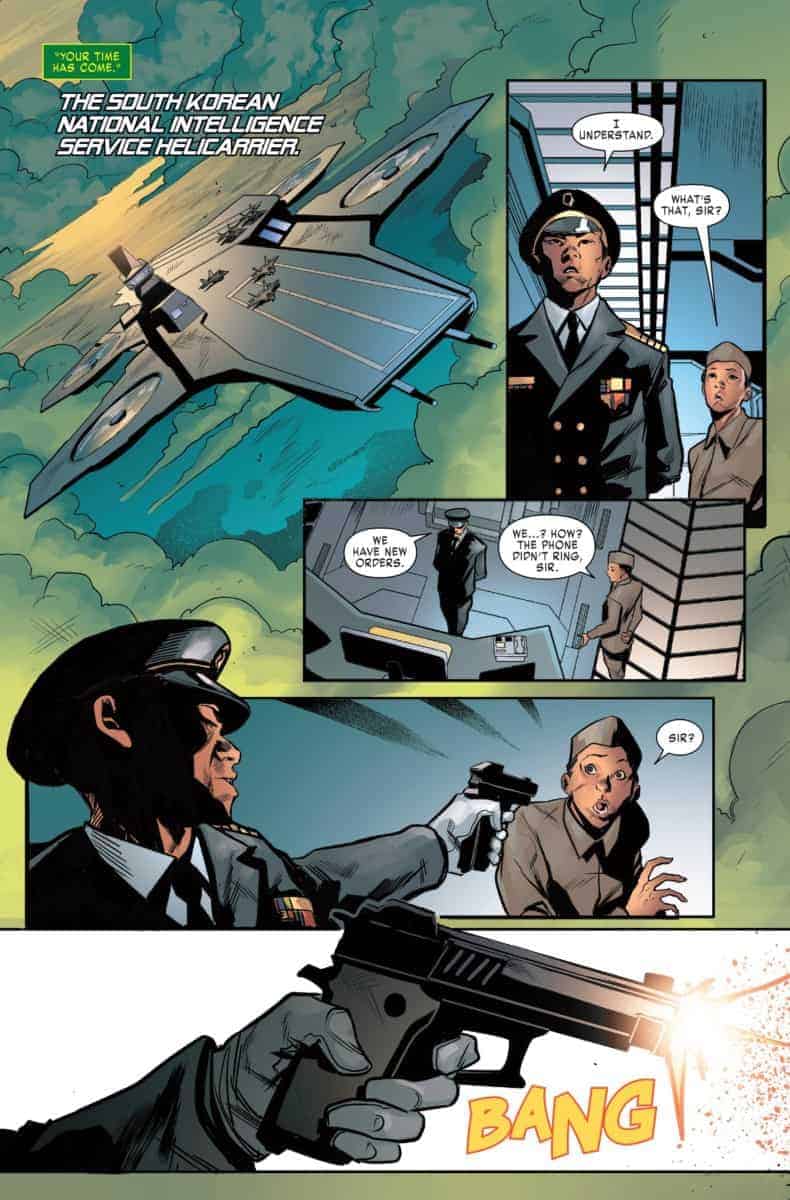 What We’ve All Been Thinking

For nine issues, Jean’s team has been fighting an incredibly powerful telepath. They’ve dealt with countless bouts of mind control and cryptic telepathic messages. Nova’s telepathy has caused them absolute hell…and it took them this long to consider putting on a telepath-proof helmet? Engineering a replica of Eric’s famous gear honestly should’ve been at the top of Jean’s list a long time ago. Still, I’m still glad Taylor got around to it in this issue.

Magneto’s helmet is one of those parts of X-Men lore that is kind of easy to forget since a lot of writers tend to steer away from it. Although it can come across as a deus ex machina in the wrong circumstance, Taylor uses it wisely here. The Red team has run out of options when it comes to fighting Nova. “Cheating” by using the helmet is the only way to come out successful. Plus, seeing Jean wear Magneto’s helmet is strangely amazing. 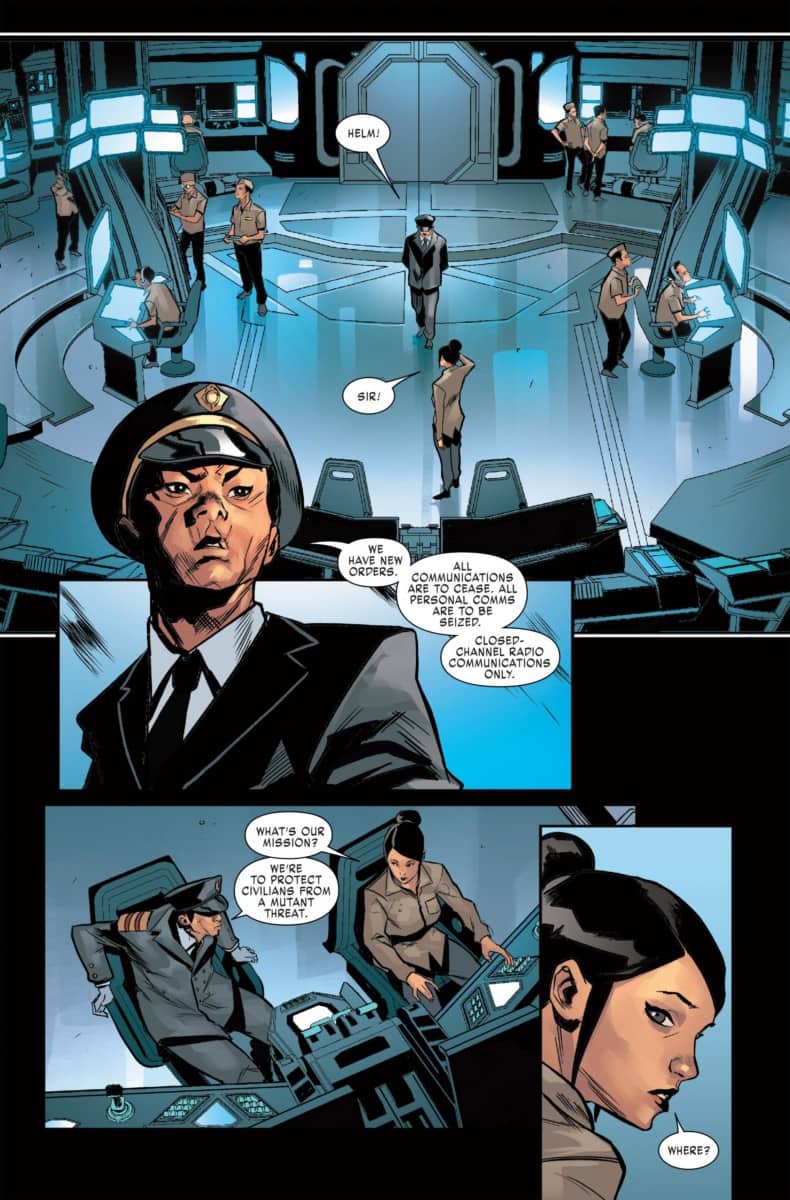 X-MEN RED new regular penciller, Roge Antonio, gives readers some beautiful panels in this week’s issue. His close-ups featuring Jean are particularly breathtaking (especially if you love Jean as much as I do). Still, many of the panels’ figures leave something to be desired. With comic book art, pencillers sometimes have to fall back on simpler forms to get the issue completed by the due date. I definitely don’t expect the amount of detail that’s put into a cover to appear in the interior art. It’s just not logistical. However, some of Antonio’s figures struck me as a little too simple. The page with the news anchors was my least favorite in the issue, purely because of how the figures looked.

Long-time X-Men colorist, Rain Beredo, does a great job as always. His classic warm-toned palette brings the undeniable sense of hope to the issue, which, at its core, is what X-MEN RED #10 is all about. 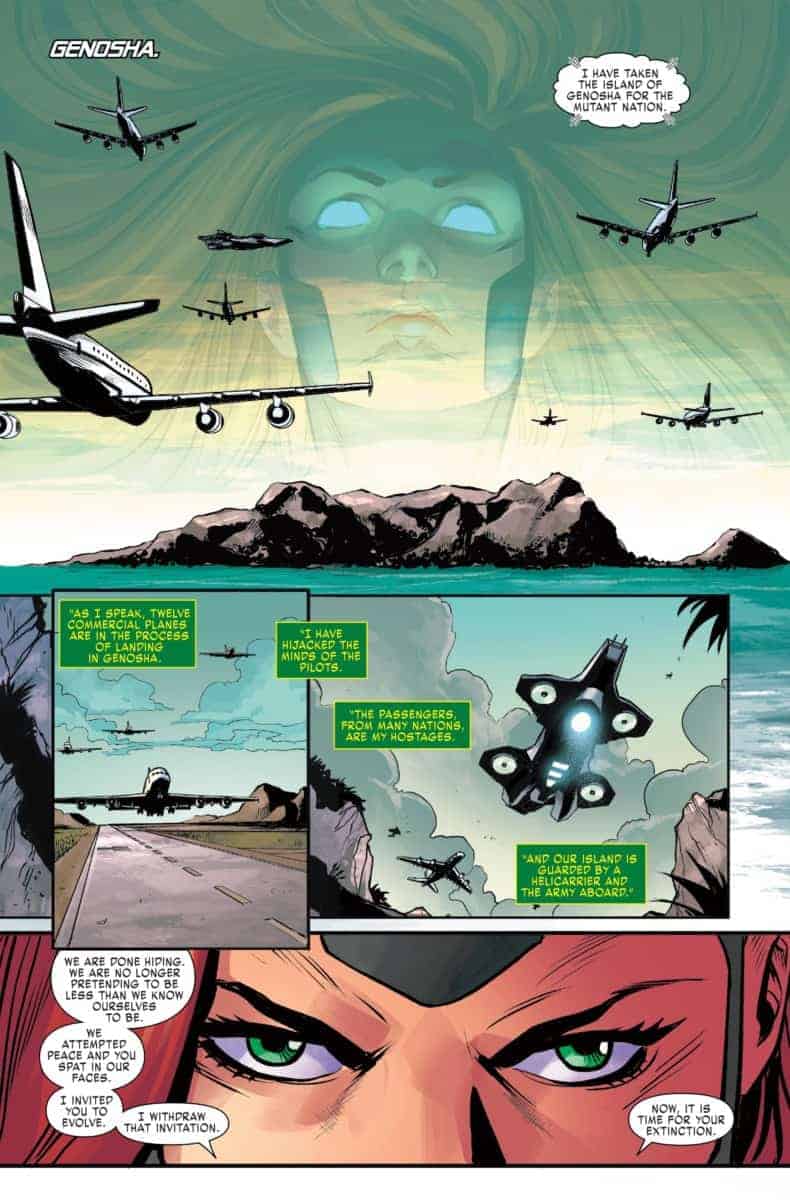 X-MEN RED #10 is the beginning of the end for the series. Marvel recently announced that they’re canceling the series in December, which means this Nova arc is on borrowed time. The slow burn up to the final battle between Jean and Nova hasn’t been perfect, but, overall, I’ve really enjoyed this series. It’s politically relevant and highlights a character we haven’t had the opportunity to see for over a decade.

Let us know in the comments below what you thought of X-MEN RED #10!