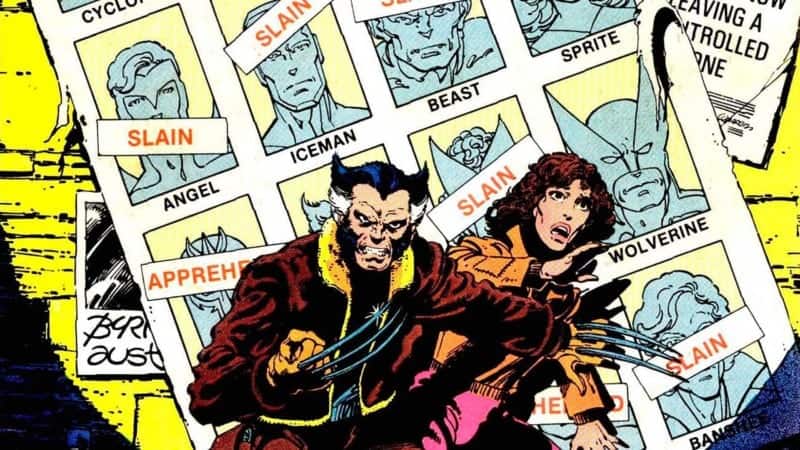 These last few months haven’t exactly been “bright” for American politics, though the president’s hair could easily blind any passerby. As such, let’s indulge in some serious escapism. What better way to do that than by reading comics? They’re harmless enough! Like good ol’ X-Men stories, where mutants are constantly ridiculed and used as political props for bigoted, power-hungry individuals… wait, what? Yes, X-Men essentially predicted this dangerous time we live in back in the 1980s. This started when they began to shift their comics from classic team romps into more biting allegories of state-oppressed groups. Stories like GOD LOVES MAN KILLS and DAYS OF FUTURE PAST each showcase how President Trump’s racist shouting is nothing new — it has always been a mainstay in American culture. It just has recently had the spotlight instead of festering in a dark corner where it belongs.

GOD LOVES MAN KILLS was written by Chris Claremont and drawn by Brent Anderson in 1982. The story focuses on the X-Men teaming up with Magneto in the wake of Reverend Striker’s anti-mutant campaign. This campaign believes that mutant-kind is abhorrent in the eyes of God, and thus worthy of mass execution. While this story on paper appears black and white in the sense that heroes fight against injustice, there are not-so-subtle nods to the social inequalities of the day.

This is evident when two African American children are hunted down by an angry mob and subsequently lynched. While the text on screen claims they were attacked because of their mutant nature, it is actually the representation of violence that is fairly common in the African American community. Unfortunately, these issues and discrepancies have become all the more relevant to modern politics with rising police violence and the Black Lives Matter movement.

The Black Lives Matter website details their guiding principles as “an ideological and political intervention in a world where Black lives are systematically and intentionally targeted for demise.  It is an affirmation of Black folks’ contributions to this society, our humanity, and our resilience in the face of deadly oppression.” While this may seem distant from the world of mutants and heroes, the opening scene would beg to differ. The children run from the “purifiers”, not knowing why their existence should be deemed worthy of extinction. They even are forced into an obvious position of submission. This parallels the “hands up don’t shoot” rhetoric of the Black Lives Matter movement. Like the current administration, Stryker and his cronies victimize people less powerful than them.

READ: Want more on GOD LOVES MAN KILLS? Read all about it here!

Like Trump’s ability to single out almost every minority group in America, recently seen for Muslim Americans with his attempted travel bans, William Stryker singles out mutants as his target for extermination. While his backstory claims his views come from having killed his deformed, newborn child before learning the kid was likely a mutant, the story does not attempt to excuse his actions at all. He riles people up into a frenzy until they are essentially a single hive mind. This is not unlike many of the Trump rallies seen during the election. People who did not support Trump who entered these rallies were met with brutal violence and disgusting language. The only true difference between these two instances is that Stryker was stopped from achieving his goals. Trump was not.

Another X-Men story, DAYS OF FUTURE PAST, written by Chris Claremont and John Byrne in 1981, centers around the dystopian Sentinel rule of 2013 (more like 2017 am I right?) and how Kitty Pryde must stop the assassination of Senator Robert Kelly in order to prevent the future where mutants are hunted and killed merely for being mutants. While Robert Kelly was a known anti-mutant activist, his death gave rise to other crueler anti-mutant voices. This occurs when Mystique kills Kelly leading to the dystopian time period. Like terrorist attacks touted as proof for Trump’s anti-Muslim travel bans, those who followed Kelly felt justified in crueler actions after these events.

While the events that take place in DAYS OF FUTURE PAST seem quick, they were the series of mounting anti-mutant legislation. Like the first travel ban that was deemed unconstitutional, the first wave of anti-mutant legislation was easily dismissed by the other levels of government. Just because it was ignored once doesn’t mean it didn’t fester within that version of America. People became more lenient, started allowing more injustice to pass through — until finally, mutants lived in constant fear for their lives and well-being. What we’re seeing now isn’t something that simply ends after one legislative victory — it’s a constant uphill battle to protect the rights of our fellow American citizens.

READ: Want to see how DAYS OF FUTURE PAST changed from page to screen? Read up on it here!

So, maybe all that’s needed to fix this time period is to go back in time and stop Donald Trump from ever wanting to be president? Maybe suggest to the young Don that he try and be a marine biologist instead. Anything that would get him away from a position of power. In a more practical notion, it’s important to be aware these types of people are nothing new. They exist in fiction and reality, both saying dangerous things that go unchecked by the public. The only difference between the two is that at least in the X-Men’s universe, those who tried to marginalize the mutants were eventually called out and defeated. In ours, those who oppress others are given the keys to the kingdom.

If anyone wishes to learn more about organizations threatened under the Trump administration or to leave a small donation, here’s a list:

Muslim Advocates: Actively fighting anti-Muslim legislation and profiling of Muslims in our community.

Border Angels: an organization that promotes human rights on issues related to the US-Mexican border.

This is a wonderful list of other humanitarian and pro-earth organizations that are also worth checking out if you’re interested!