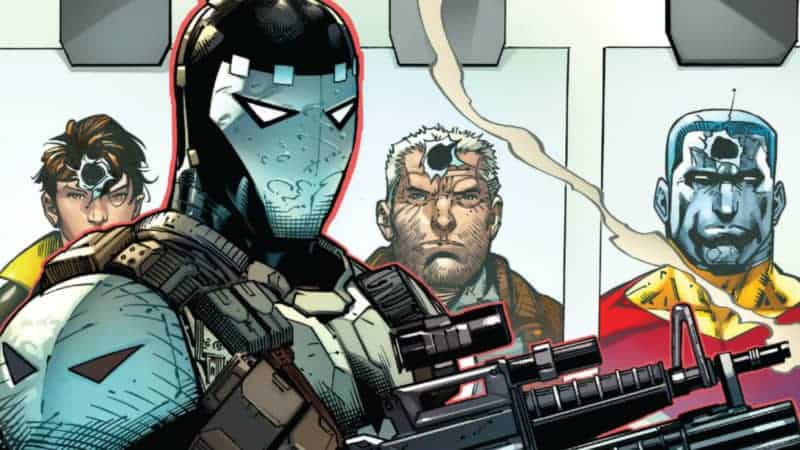 The X-Men have faced some dangerous stakes in their 54 years of existence. From death-dealing Sentinels to overzealous fanatics to highly advanced alien races, the X-Men are lucky to be alive. However, have they ever considered the fallout from their grand battles? The families that have been separated due to their powers and intervention? In X-MEN GOLD #8, the team faces these questions as their newest threat stampedes through the X-Mansion. With bombs set to destroy the mansion and several of the merry mutants without their powers, does the X-Cutioner have the upper hand? Find out in this special SECRET EMPIRE tie-in!

Kitty Pryde’s X-Men have been seemingly defeated at the opening of X-MEN GOLD #8. Colossus, who lost his metal-shifting abilities, has been shot. Rachel Grey is unconscious, and a timer ticks away in the X-Mansion’s basement. While the other X-Men attempt to evacuate the mansion, Kitty Pryde faces the X-Cutioner, the highly trained masked serial killer who threatens her family. Taking up her sword, Kitty dives into battle without her powers, showing readers the ninja-trained badass that we have been waiting to see.

READ: SECRET EMPIRE sees Hydra Cap taking over the U.S. Here are our thoughts on the implications of this controversial concept!

X-MEN GOLD #8 is a roaring success in terms of its narrative. Though the plot feels a bit quick, X-MEN GOLD #8 does give the moments of importance their due. One of my biggest complaints in action comic books is that the actual fights feel rushed. Writers relegate them to singular punches and feints. This gives a cursory feeling of a great battle without any of the fine details and motions that fill real combat. However, writer Marc Guggenheim and artist Ken Lashley address this problem directly in the climactic battle between Kitty Pryde and her highly skilled opponent, X-Cutioner. They stretch this battle out across pages, giving the sense that this is visceral and gritty and potentially deadly.

This issue does suffer from some rushed moments throughout, but it is this one-on-one combat section that truly shines. Lashley’s art is so beautifully descriptive, the anatomy fitting perfectly into this realm of martial combat. What makes this work, though, is that the characters aren’t silent. X-Cutioner is in conversation with Kitty, voicing his disgust for the collateral damage caused by superpowered abilities. And Kitty doesn’t deny the lives she failed to save, taking full responsibility. As they do battle with their weapons, they take to verbal sparring.

The section involving the brutal beating of Nightcrawler does need some expansion. There are some major revelations in this moment, but after these come out, we never explore them again. The story ends days after the end of SECRET EMPIRE; we are unaware how much time has passed or how the team handled the Darkforce Dimension. So much time passes without any extra development of these surprises, they get lost in the overarching action.

Guggenheim’s greatest success in X-MEN GOLD #8 is in his portrayal of Kitty Pryde and Colossus. There are plenty of subtle moments in this story for characters like Colossus that speak greatly to who they really are. Colossus has no powers in this comic, but twice in this issue he stares down a bullet. He loses out on some dialogue, but in the story, Guggenheim fully reinforces his character. Kitty, of course, has the greatest development in her conversation with X-Cutioner. She discusses how much she grieves the loss of innocent lives in her crusade. She regrets every failure, yet she still feels confident about her decisions. Kitty reinforces her martial art skills in this issue, but she most importantly proves herself to be a great leader.

This character development isn’t spread evenly. As mentioned, Nightcrawler stands beside Logan, Storm, and Prestige in their lack of character exploration. However, the greatest failing here is in the villain. X-Cutioner was a terrifying, sympathetically evil force in the previous issue. We watched his family slaughtered by Magneto, and we witnessed his grief and fear. However, at the end of X-MEN GOLD #8, so many questions remain unanswered. Where did he receive this training? When did his crusade begin? Where did he receive funding for his advanced weaponry? Even after he nearly succeeds in killing the X-Men, he still remains a mystery.

In terms of plot and artwork, X-MEN GOLD #8 is a nearly perfect issue. Despite some rushed plot beats, Guggenheim crafts a high tension, intense exploration of Kitty Pryde as combatant and leader. Lashley brings to life a truly forceful, realistic battle in the pages of X-MEN GOLD #8, and the dark tone he infuses into his work only strengthens the realistic anatomy.

Despite the failings in terms of character, X-MEN GOLD #8 is still one of the absolute best tie-in issues for a Marvel event. It works because it simply uses the setting as a background to tell its own story. Not every superhero finds themselves wholly involved in the battle against Captain America, and I appreciate that we get to see the X-Men separated from the world at large. This is not a perfect issue, but it does many things right. Any superhero fan reading this should drop everything and pick this issue up, if only for the fantastic combat scenes.