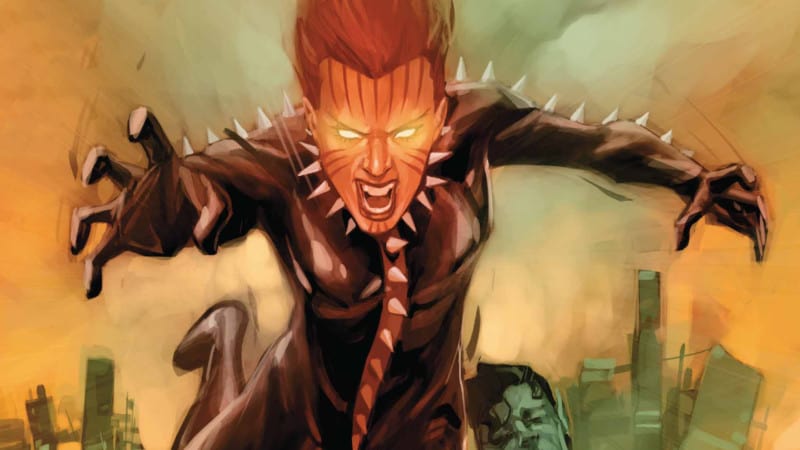 Writer Marc Guggenheim and artists Pere Perez and Jay David Ramos delve into the twisted psyche of Gold team member Rachel Grey in X-MEN GOLD #32. Not surprisingly, Rachel’s mindscape isn’t a place for the faint of heart. Guggenheim recreates the depraved apocalyptic future Rachel called home before arriving in present Earth-616. Rachel thinks she’s still a mutant hound, forced to hunt down and murder her fellow X-Men members. With Mesmero’s claws sinking deep into the possessed telepath’s brain, it’s up to the teenage Cyclops to save the day and defeat his “daughter” before she slaughters everyone. But can he do it? Read to find out!

Magneto Returns to the Dark Side in X-MEN BLUE #31

X-MEN GOLD #32 alternates between two very different settings: Rachel’s distorted future reality and the present Earth-616 we all know and love. Picking up where X-MEN GOLD #31 left off, we see Rachel effortlessly defeating all of the X-Men using her advanced telepathic powers. She takes down Storm, Magik, and Cyclops, but finally begins to tire out after Bobby Drake hits her with a shard of ice. Cyclops gets back up, only mildly injured, thus proving to Rachel that what she’s seeing isn’t real. A tear-jerking heart-to-heart later and Rachel is back in the real world.

This issue marks the first instance in X-MEN GOLD history of a character other than Kitty Pryde or Colossus taking the center stage. Every single issue in this series has had an undeniable focus on Kitty and (in most cases) her relationship with Colossus. Now, since that’s water under the bridge, Guggenheim can put all of his energy towards Rachel. With only a few issues left in the series “all of his energy” doesn’t equate to much but it’s something. Seeing Rachel on the cover and on almost every page of the issue makes it clear that she’s the star — not Kitty.

As great as it is to see Rachel taking the spotlight, I definitely wish the storyline was different. In X-MEN GOLD #31 Mesmero invaded Rachel’s mind, sending her mentally back to her abusive time as a mutant hound. In X-MEN GOLD #32, she escapes Mesmero’s telepathic prison and refuses to be seen as “just another Jean Grey” who can’t control her powers without hurting others. That sounds all nice and good until you realize that Rachel said that exact same thing at the beginning of X-MEN GOLD. That’s why she took the codename “Prestige” — she didn’t want to be associated with her mother, or her past, in any way.

With this current arc, Guggenheim is really just repeating what’s already happened. Even before X-MEN GOLD, Rachel was constantly flipping between wanting to be her mother’s daughter or wanting to be her own person. It isn’t anything new. I love seeing Rachel, but I wish Guggenheim had been a little more original.

The End is Nigh

We know Marvel cancelled X-MEN GOLD, with its last issue appearing in September. That doesn’t give Guggenheim a whole lot of time to wrap things up. With this short, Rachel-focused arc, I can’t help but think Guggenehim was trying to make up for the thirty issues that were purely focused on Kitty. Now, he’s trying to explore an ignored character with very few issues left. The result isn’t completely bad, since we do get to see more of Rachel. However, there just isn’t enough time to create something really memorable.

What I am interested to see is how Guggenheim’s characterization of Rachel survives after X-MEN GOLD ends. Will she go back to being Prestige or will she forget everything she said about not being a Grey and take on the Marvel Girl title once again? Guggenheim doesn’t have enough time to really build Rachel’s character, but he can point her in the right direction. We can only hope a new X-Men series will continue to give Rachel some needed panel time.

As silly as it may sound, penciller Pere Perez’s biggest achievement in this issue is drawing double. Almost every person in this issue has two different looks: one from the future and one from the present. It’s hard enough drawing one character and making them look consistent throughout the entire issue. Somehow, Perez captures the specific likeness of each character, both in their older and younger forms. I thought Perez’s talents shined particularly brightly when illustrating Cyclops. Perez perfectly transforms Cyclops from naive teen to hardened man and then back again.

In terms of colors, Jay David Ramos does a fairly good job. He doesn’t try to create unique palettes, sticking to more mainstream color choices. This makes the issue feel creatively a little safe, but that’s not necessarily a bad thing. I’d rather see a colorist stick to what he knows than ruin good art with a bizarre palette.

X-MEN GOLD #32 has it faults, as any comic does. This issue lacks some of the excitement seen in X-MEN GOLD #31, but it’s still an entertaining read. Of course, this is especially true if you’re a Rachel Grey fan. In my opinion, Guggenheim’s story lacks originality and suffers from time constraints. However, Guggenheim’s inclusion of Rachel as a major character makes X-MEN GOLD #32 a worthwhile issue. Is it the kind of issue that’ll keep you thinking, hours after reading it? No. Will it satiate your inner Rachel Grey fangirl? Yes.