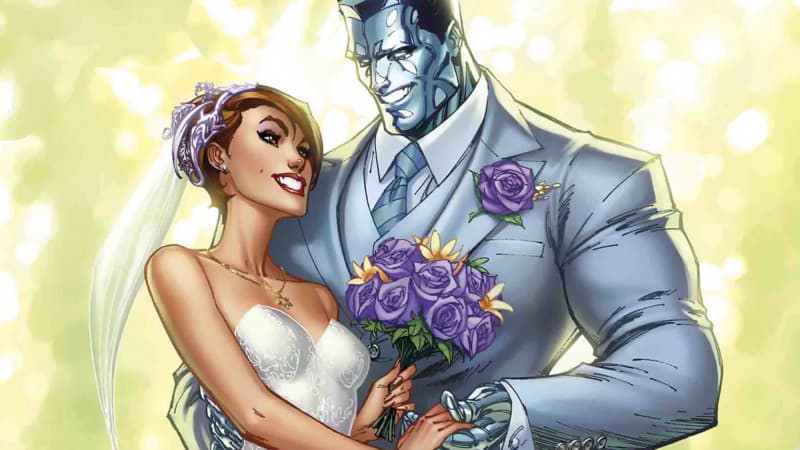 In all my years of reading comics, I don’t think I’ve ever seen such a dramatic turn of events as what happens in X-MEN GOLD #30. A quick warning, if you haven’t read this issue, please, please, please go read it first. It’s impossible to talk about X-MEN GOLD #30 without revealing major plot spoilers so go hit up your local comic store and then come and read our review.

The past couple of X-MEN GOLD issues have, unfortunately, been a little boring. Writer Marc Guggenheim seemed like he was just working the series to a gooey, romance-filled wedding by creating an entire arc about Kitty and Colossus’ intense love for one another. For those who like their comics a little less syrupy, X-MEN GOLD #26-29 aren’t very enjoyable.

But all of that changes in X-MEN GOLD #30. The declared “wedding issue” does contain a wedding…but it isn’t for the couple we all thought it was for. Guggenheim and artists David Marquez and Matthew Wilson completely change the course for future X-Men comics. Want to know what ComicsVerse thinks about the huge plot twist? Keep reading!

X-MEN GOLD #30 starts out the way we all expected it to. All of the X-Men are attending Kitty and Colossus’ rehearsal dinner the night before the wedding. During the festivities, Kitty’s maid-of-honor, Magik, pulls her best friend aside for a talk. She reveals to Kitty that she doesn’t think the marriage feels right. According to her, if Kitty and Colossus were destined for each other, they would’ve married years ago.

Guggenheim then skips to the day of the wedding. Kitty is finally walking down the aisle, but when it’s time to put the rings on, Kitty phases through Colossus’ hand. In a frenzy, she confesses that she can’t go through with the marriage. Embarrassed, they both flee.

At the would-be reception, the X-Men talk about what makes someone want to get married. The conversation leads Gambit to consider his current relationship with Rogue. In an unexpected turn of events, Gambit gets on one knee and proposes to his girlfriend. She says yes, and the issue closes with their wedding instead.

This issue almost makes me feel like Marc Guggenheim tricked everyone. For a long time, I thought X-MEN GOLD was the most Kitty-centric series to date. Every issue was all about Kitty and, in more recent issues, her relationship with Colossus. There was little to no characterization outside of that tiny circle. Other characters were frequently shorted because Kitty hogged the spotlight.

And then this happens. Kitty’s big day is overshadowed by the fan-favorite couple of Rogue and Gambit. It’s almost as if Guggenheim had planned this all along — building up Kitty’s character just to bring her back down to Earth in X-MEN GOLD #30. For Kitty and Colossus’ fans, I’m sure this issue is disappointing. But readers who feel Kitty’s had an unfair amount of panel-time in X-MEN GOLD will absolutely adore this issue. Finally, some characters who aren’t Kitty or Colossus are getting some attention.

It makes sense why Guggenheim chose not to wed Kitty and Colossus. True, they’ve been on and off for years, but when they’re off, they’re really off. Plus, they very recently got back together after years apart. They need some more time with each other before tying the knot.

Why Guggenheim chose to marry Rogue and Gambit instead of Rachel and Nightcrawler is the biggest question I asked myself after finishing the issue. Like Kitty and Colossus, Rogue and Gambit have had an on and off relationship for years, and they too have only been back together for a short amount of time. A lot of fans really like Rogue and Gambit together, which might have something to do with Guggenheim’s decision. I think Marvel also wanted another Rogue and Gambit series after the success of ROGUE AND GAMBIT. Thanks to X-MEN GOLD #30, we have the poorly titled MR AND MRS series to look forward to.

Since Rachel Grey and Nightcrawler are members of the Gold team, it would’ve been slightly less random to have their wedding instead of Rogue and Gambit’s. Their relationship isn’t decades long, but their chemistry is sincere. Guggenheim didn’t give the couple a lot of panel-time in X-MEN GOLD, so their spontaneous wedding would have been a nice way to make up for obvious neglect.

Artist David Marquez does a superb job illustrating X-MEN GOLD #30. His delicate line work and achingly beautiful figures and faces fit the marriage theme perfectly. The best panel in the issue is undoubtedly the full page spread of Kitty’s hand phasing through Colossus and the ring. It’s simplistic, with a blank background, but the image is extremely powerful. Without any words, Marquez reveals the huge plot twist with just a few clean lines. It’s stunning, visually, and emotionally impactful. I don’t think anyone else could have done a better job on this issue than Marquez. He absolutely nails it.

Of course, the art wouldn’t be complete without a talented colorist. Matthew Wilson breathes life into Marquez’s pencils while still confining his palette to the soft pastels appropriate for a wedding issue. From soft, rosy blushes to golden sunsets, Wilson visually creates the sensation of love within the pages of X-MEN GOLD #30. Together, Wilson and Marquez make the art in this issue some of the most memorable I have seen in a while.

X-MEN GOLD #30 is an inarguably fantastic issue. It has a great plot-twist, amazing art, and characterization that breaks the mold created by past issues of the series. I personally haven’t enjoyed many issues of X-MEN GOLD because the series seemed to lack a sense of reality. Kitty and Colossus’ relationship felt too quick and forced to be real. This issue finally delivers a needed dose of real life while still maintaining a happy-ending. I’m sure some fans won’t be happy about the turn of events, but I for one am overjoyed. Crazy twists are what make comics great, and the twist in X-MEN GOLD #30 is one for the books.