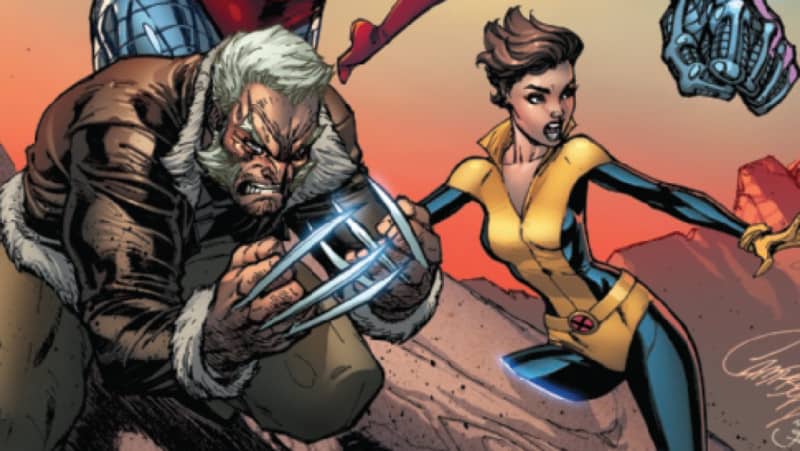 The first arc of Marvel’s X-MEN GOLD comes to a near-perfect conclusion in issue #3. X-MEN GOLD #3 flawlessly interweaves action with civil rights metaphors and poignant political commentary. Amazing things happened in X-Men comics the last few years, however, not since Rick Remender’s UNCANNY X-FORCE run have I finished reading a comic and felt so satiated after.

X-MEN GOLD #3: The Perfect Combination Between Old and New

Make no mistake, if you had any doubts as to how Kitty Pryde might lead the X-Men, all worries quell themselves by the end of the issue. Kitty Pryde is nothing less than a tour de force in X-MEN GOLD #3. As a leader, her decisiveness and quick thinking instantly hurl her towards the top of the list of X-Men team leaders. In fact, I found her leadership skills so impressive that I almost finished the issue asking, “Cyclops and Professor Xavier, who?”

There’s more than meets the eye with Magma’s involvement with the Brotherhood. Image courtesy of Marvel Entertainment.

While much difficulty exists in showcasing each character’s persona in a single issue, Colossus, Storm, and Nightcrawler all shine in their own moments. Rachel Grey also steps up when she uses her telepathy in a way that would make her mom, Jean, proud. Kitty is the unmistakable star of X-MEN GOLD #3. However, if you read my review of X-MEN GOLD #2, I discussed one of my favorite underrated X-Men of all time — Magma aka Amara Aquilla. I don’t want to give away every detail of the plot for those who have yet to read the issue, but I will say I felt no disappointment when the mystery of Amara’s involvement in the Brotherhood of Evil Mutants revealed itself.

X-MEN GOLD #3: The Art in the Machine

I won’t comment on Ardian Syaf’s insertion of his political perspectives here. It’s a shame he messed up so bad. His work in X-MEN GOLD #3 is fantastic and reminiscent of 1990’s era Jim Lee, Rob Liefeld, and Whilce Portacio X-Men art.

Syaf’s artistic prowess lies in how fully the facial expressions he depicts convey robust emotions. As the reader, you easily find yourself rooting for Kitty Pryde. Her depiction is detailed enough for her to come alive while vague enough for the reader to identify with her. UNDERSTANDING COMICS by Scott McCloud defined the principle of identification through simplification. Ardian Syaf understands Scott McCloud’s principles and the language of what makes great comics. He uses that understanding to his and the reader’s advantage.

Perhaps the most fun highlight of the issue involved seeing students of Xavier’s school who wanted in on the mission. In one of her displays as a great leader, Kitty instantly chooses Rockslide and Armor to join the X-Men in the fight against the Brotherhood of Evil Mutants. At times, characters guest starring in a comic can appear gimmicky. However, both Rockslide and Armor provide necessary levity and humor. It only adds another layer onto this issue, making it all the more incredible.

Students at Xavier’s School in X-MEN GOLD #3 want in on the fight against the Brotherhood. Image courtesy of Marvel Entertainment.

I’m not against the occasional spoiler. However, the twist near the end of the issue is so shockingly relevant that I won’t give it away. It comprises part of what makes Marc Guggenheim’s writing so good here. X-MEN GOLD #3 serves as Guggenheim’s warning to not only the United States of America but to the world. Racism, bigotry, and hatred left unchecked give rise to those seeking power over the people for selfish reasons. These people stop at nothing to achieve their ends. No depths exist into which they will not descend. The parallels to the Trump Administration, Brexit, and Marine Le Pen are, well — uncanny. This comic opens one’s mind to the dangers surrounding us, if the reader allows it. If only we had a team of X-Men led by Kitty Pryde to help us fight these dangers in real life.