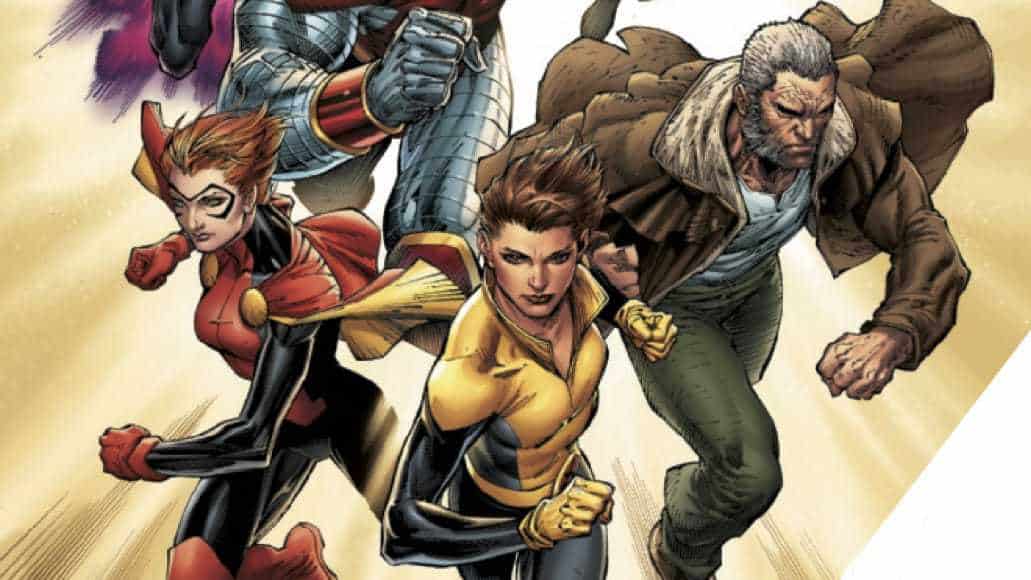 Now under the leadership of Kitty Pryde, Marvel’s X-MEN GOLD #1 kicks off a new era for the renewed X-Men.

The story begins with an age-old question familiar to any X-Men fan: “Why does the world hate and fear mutants?”

A mature, gray-haired woman poses the question. She seems to go on to make a case for mutants having no difference from Inhumans or other enhanced individuals. At the dawn of a new age that is MARVEL’s ResurrXion event, the reader must think, “does this signal a change in mutants’ status as othered?“

The woman’s clear blue eyes and friendly face appear to depict compassion. However, the comics medium is a collaborative art form that is wonderfully unpredictable. Frank Martin’s exquisite coloring work on the first page tells a different story. The first panel depicts only an extreme closeup of the woman’s face. The red, abstract expressionist background contradicts her words or whatever point, it appears, she tries to make. The deep red color connotes danger. The juxtaposition of red with the woman’s words stirs a subtle discomfort. It creates a discord that causes a yearning for a harmonious resolution. After all, this is X-MEN GOLD #1. Would you expect anything else besides an immediate punch to the gut?

Ripped From the Headlines

It’s unknown if the creative team planned it, but this Betsy Devos-like woman is a character ripped from the headlines of Trump’s America. Her bigotry and misguided concern erupt after her questioning the erroneousness of mutant discrimination. Perhaps that’s why I am gut-wrenched. Her speech, her hatred, her dangerous cluelessness is all too familiar. If you’ve got a heart, you’re either thinking of the innocent Muslims Trump tried to ban from entering the United States, the Latin American immigrants who cross the border into America to save their families from a hellish life, or our transgender brothers and sisters who no longer receive protection from the civil rights advances made under the Obama Administration.

What happens next is, to me, what makes MARVEL great. At the darkest moment in the middle of a never-ending witching hour comes dawn. Our heroes greet us. The familiar battle cry: “to me, my X-Men,” now shouted by none other than Kitty Pryde herself.

The roster of characters making up the X-Men team in X-MEN GOLD #1, in addition to Kitty Pryde, is Storm, Nightcrawler, Colossus, Prestige (Rachel Grey’s new moniker), and Old Man Logan.

Terrax reveals himself to be the first villain of this newborn series, the first boss in the game if you will. While the events of DEATH OF X and INHUMANS VS X-MEN contained dark moments, there were also moments of levity within them. X-MEN GOLD #1 quickly does away with any darkness after the Betsy-Devos-wannabe’s speech. In battle, the team meshes in a way that is reminiscent of Joss Whedon’s ASTONISHING X-MEN. Remember that big scene when Cyclops shoots the biggest, most powerful concussive force beam from his eyes, like, ever? I won’t go into too much detail. I will tell you Kitty Pryde shines in this moment. Kitty’s moment shines every bit as bright as Cyclops’ shines for him in ASTONISHING X-MEN.

Despite another charming and poignant Kitty Pryde speech that goes awry (because when has a Kitty Pryde monologue ended with desired consequences since X-MEN: GOD LOVES, MAN KILLS?), character dynamics in X-MEN GOLD #1 the X-Men haven’t experienced since before Scarlet Witch lost her $%*# on M-Day exist. You’ll know what I’m talking about when you get to it. As I always say, it’s the private moments and exchanges that make X-Men the great franchise it is. When we experience the fun these characters enjoy together in this issue is no exception.

As a First Issue, How Does X-MEN: GOLD #1 Compare?

First issues of series are notoriously difficult to pull off well. There simply isn’t enough page space in American Comics to explore a character. It also makes it difficult to elongate a moment through a series of panels. X-MEN GOLD #1 nears the top of the list as far as number one issues go inside and out of the Marvel Universe. Levity balances itself with emotional depth; a metaphor sandwiched between battles that foreshadow the next storyline.

Marc Guggenheim’s flag is now firmly planted on the crust of a new mother world of X-Men books. His talent gives him the potential to be the next great X-Men scribe among elites like Chris Claremont, Mike Carey, Matt Fraction, Cullen Bunn, Craig Kyle, Chris Yost, Jason Aaron, and Grant Morrison.

My sole criticism of this issue lies not within the efforts of this fabulous creative team but, rather, in the quagmire first issues always present. Yes, the creative team navigates the Bermuda Triangle that is a first issue of a new comics series as flawlessly as any team can. However, what I need isn’t something they are allowed to give me. I need MARVEL to grant more power to these creators. I have no doubt they may create something so extraordinarily outside of the box, no pitfalls that plague first issues would exist for the creative team at all.

A New Style of Art?

At first glance, the style of character drawing is typical of the superhero genre. Upon further inspection, there is a realism in the art rarely seen in superhero comics. The emotion of the characters and the detail conveyed in Ardian Syaf’s pencils, down to the crow’s feet of more mature characters, only enhance the thick lines of Jay Leisten’s inking. There is, what the Ancient Roman’s called, a Veritas to the characters’ countenance. It is most likely the result of purposeful synchronization between the entire creative time. It deserves all the applause one can muster.

Throughout the battles, the games, and the drama, perhaps what I stepped away with after reading X-MEN GOLD #1 was something like a sense of comfort brought on by nostalgia. My favorite moment is a simple, quiet conversation between Nightcrawler and Storm. Their emotional masks are off, and they converse as Kurt and Ororo. For the seasoned X-Men fan like myself, each word of their conversation tugs at your heart. You fondly recall earlier moments in the history of the X-Men the exact same words were exchanged, although in different circumstances. In conclusion, I think even a cynic will be satiated. I can also guarantee that if you’re open to the infinite possibilities X-MEN GOLD #1 sets the stage for, a part of you will instinctually know you’re reading X-Men history in the making.