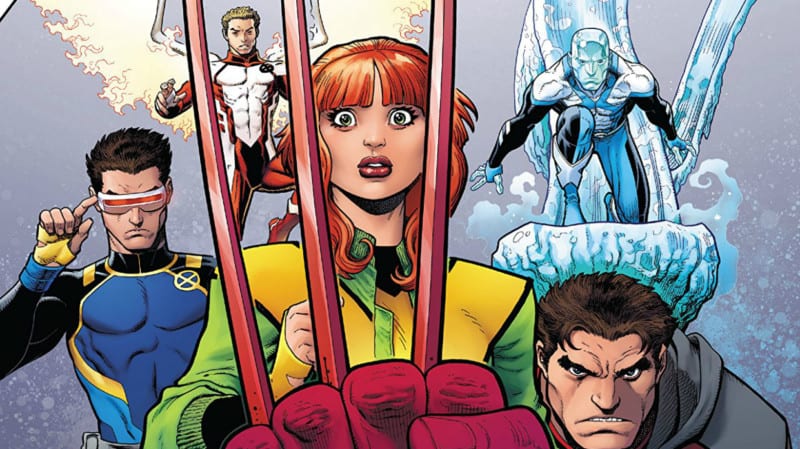 X-MEN BLUE has been a solid X-Series since its riveting first issue. From then, it has consistently kept up its quality and wholesomeness. X-MEN BLUE #4 is no exception, offering yet another adventure with Jean Grey’s time displaced X-Men. Though the plot was interesting, I found myself drawn to the more subtle moments in this issue: the exploration of the characters.

I suppose, with solo series for Jean Grey and Iceman, their characters have been expanded upon already. However, without those as an addition to reading X-MEN BLUE #4, I wanted much more. Writer Cullen Bunn imbues this issue with fun action for the X-Men, but it felt lacking in terms of character exploration. The balance between character development and straight plot felt more in tune during the last few chapters. Regardless, it’s a fun ride that forms some connective tissue amidst the team. This group is certainly growing into something strong and stable.

Another Episode of X-MEN BLUE

After four issues, this series reminds me of a Saturday morning television show. Each episode is self-contained, and while there is a somewhat general overarching plot, it’s gentle and in the background. That’s what X-MEN BLUE #4 continues to do. Honestly, it’s refreshing. Too few comics are approaching stories this way, opting for a more heavy-handed narrative. Though I enjoy both styles, I appreciate how this series handles their story.

READ: Do you want more Marvel Girl? Check out our review of JEAN GREY #1!

This week on X-MEN BLUE, the team gets a message about a creature killing people in the mountains of Colorado. So they set off, donning adorable X-Men winter jackets (who makes all the X-Men attire? They should get more credit). As the cover suggests, an adamantium afflicted character will come into focus. Without spoiling the reveal, I’ll just say this: it’s not who you think.

While hunting down the creature, the X-Men come across the sheriff of the town, Kira Lee. She’s amazing in the way that she has no biases against the mutants, positive or negative. She doesn’t run from them nor worship them as all-powerful mutants. In fact, she shoots a flirting Warren down with some legendary snark. There aren’t enough human characters in the X-Men that aren’t evil or completely helpless, so I hope we see more of Sheriff Lee in the future.

Unified, At Least for Now

Jean Grey shows us yet again that she’s a capable, strong leader. Throughout the entire issue, she takes the lead and makes smart decisions. It’s hard to forget that she’s still essentially a child. Although, Jean has surely aged faster than most, due to what she’s been through already. Nevertheless, with her at the helm of this team and Kitty Pryde leading another, kudos to the X-Men Universe for treating women right this time.

LISTEN: Ever wondered how X-Men intersects with politics? Check out the ComicsVerse podcast Episode 91!

Personally, I’ve gotten a little tired of Iceman being nothing more than comic relief. There’s so much more to Bobby, in particular regarding his sexuality. Yet at least in X-MEN BLUE #4, he’s hardly more than a source of one-liners. A surprise appearance from Bobby in his Hulk Iceman form redeems how the issue treats him just a little. His powers seem to be getting cooler and cooler (no pun intended). Hopefully, his character can evolve alongside them.

Julian Lopez’s art in X-MEN BLUE #4 delivers as always. I’ve truly grown to appreciate his style through these past issues. The mix between realism and cartoon suits the ambiance of the series. It’s also great for comedic effect. In particular, Lopez’s style reminds me of older decades of comics. Perhaps it’s the style or the inking, but reading X-MEN BLUE always feels like a blast to the past. It creates a fitting atmosphere, considering that these new X-Men are from that time period in the first place. Subtle elements like this give X-MEN BLUE a solid quality and maturity.

Though I applauded X-MEN BLUE for being more like a series of one-shots than a continuing arc, X-MEN BLUE #4 ends in a way that suggests otherwise. However, by now Bunn and Lopez have proven themselves able to create a compelling story and team. Making the original X-Men interesting is a challenge as well, considering how over-exposed they are in comics. And yet, I’m drawn to this team and more specifically, its members. Therefore, whichever way the story goes, I’ll be sure to follow.