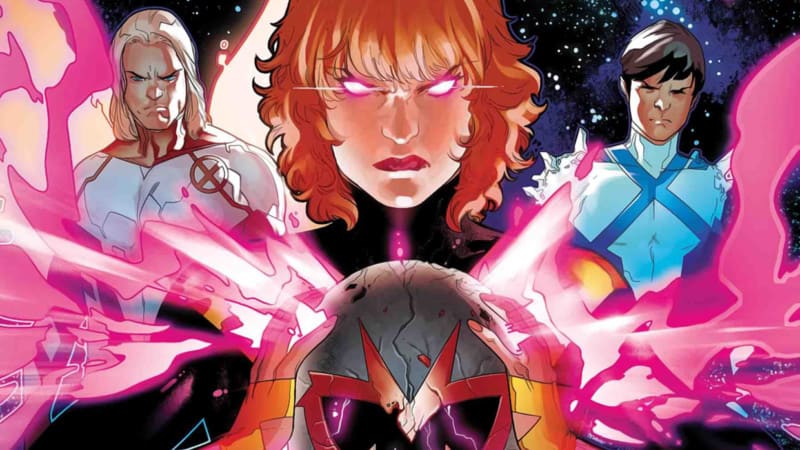 We always knew the Blue team wouldn’t last. From the outside looking in, X-MEN BLUE is about a suddenly “good” version of Magneto leading a team of time-displaced teenage X-Men. There have been a lot of changes in the series since its first issue over a year ago, including both temporary and permanent roster changes. Still, the general premise of the series is inarguably crazy, and Marvel never built it to last. This week’s issue, X-MEN BLUE #32, proves this perfectly.

Writer Cullen Bunn and artists Andres Genolet and Matt Milla dismantle the Blue team by turning Magneto against his former pupils. Emma Frost helped disperse Mothervine during the “Cry Havok” arc, which, according to Magneto, warrants her death. In the last issue of X-MEN BLUE, we saw Magneto trying to hunt down Emma, but in X-MEN BLUE #32 he finally has her. Now, the only thing that stands between Magneto’s lethal powers and the once White Queen is the Blue team. While they may not look like much, Jean Grey and her team are able to hold off the Master of Magnetism long enough for Emma to escape. But they can’t hold him forever.

Rachel Confronts the Past in X-MEN GOLD #32

With Magneto back on the dark side and the time-displaced X-Men (most likely) heading home in EXTERMINATION, this series’ days are numbered. However, that doesn’t mean Bunn can’t give us an interesting story before X-MEN BLUE concludes forever. X-MEN BLUE #32 is packed with action and offers a surprising amount of in-depth characterization for a series that’s taking its final breaths.

Like a lot of the past issues, Bunn focuses on Jean and, in particular, Jean’s relationship with Magneto. Since Jean was dead for over a decade, I don’t mind Bunn favoring her over the other characters. Plus, I think in this series she carries the most baggage from her “future” self. Older Jean destroyed an entire planet. Bunn should be focusing his attention on younger Jean.

In the final scenes of the issue, Magneto and Jean face off. As per usual, Jean gives the fight her all and Magneto quickly realizes that she’d be willing to sacrifice herself to stop him. He realizes that, like him, Jean carries the burden of passion and heroism. She’s willing to risk everything if she feels strongly enough about something. In the end, Magneto stops the fight because he knows if they keep going, they’ll eventually sacrifice themselves.

The Future of the X-Men

A few weeks ago, Marvel announced the creation of a new X-Men series: X-MEN BLACK. This new series will feature numerous one-shots about various X-Men villains. One of those one-shots will be all about Magneto. So, what can we expect from Magneto’s one-shot and how will the end of X-MEN BLUE affect X-MEN BLACK? While I don’t think I can answer those questions entirely, I do think Bunn is already sending us a few hints about the future of Magneto. By giving Magneto a spotlight in these last few issues, he’s preparing fans for a Master of Magnetism one-shot. He’s also preparing them for a version of Magneto that isn’t as well-behaved as recent adaptations of the character.

At the same time, I don’t think Bunn is trying to show fans how evil Magneto is. He does do some questionable things in X-MEN BLUE #32, but in the end, he realizes his own mistakes and stops the violence. Bunn is showing a complex Magneto, who has more layers than the character Stan Lee introduced back in 1963.

While I’m well aware that Bunn is doing this to try and promote X-MEN BLACK, I don’t necessarily think that’s a bad thing. Magneto hasn’t had a huge role in recent X-Men comics, even though he’s a clear fan favorite. I’m excited to see what X-MEN BLACK #1 writer Chris Claremont does with this classic character.

X-Men comics just can’t keep a steady creative team. X-MEN GOLD and X-MEN BLUE have regularly changed pencillers and colorists since their first issues. Sometimes, this isn’t necessarily a bad thing. Fresh art can steer a series into a new direction, which works if a writer wants the series to go in a new direction.

For X-MEN BLUE, I would’ve liked to see consistency over newness. X-MEN BLUE #32 doesn’t mark a change in direction, so the radically new style offered by artist Andres Genolet just doesn’t work. This is a serious issue, dealing with a pivotal moment for the Blue team, but Genolet’s work is reminiscent of childish cartoons. That’s not to say he isn’t talented. The art is beautiful and could definitely function well in the right environment. It’s just for this issue, Genolet’s simplistic lines and exaggerated facial features make light of an issue that’s pretty grave.

What partly saves Genolet’s art is colorist Matt Milla. He uses Jean’s pink and red telepathic powers to bathe much of this issue in an eerie glow. When paired with Milla’s colors, Genolet’s lines fit this issue much better than without.

Magneto Returns to the Dark Side in X-MEN BLUE #31

X-MEN BLUE #32 is what most people probably think of when they hear the word “comic.” It’s superpowered fighting at its finest. However, there’s also some interesting characterization going on beneath the flying metal beams and telepathic feats.

In the next issue of X-MEN BLUE, the Blue team is headed into the future where they’ll meet themselves…but older. What will their future selves have to say? Check back on August 8th to read our review of X-MEN BLUE #33!