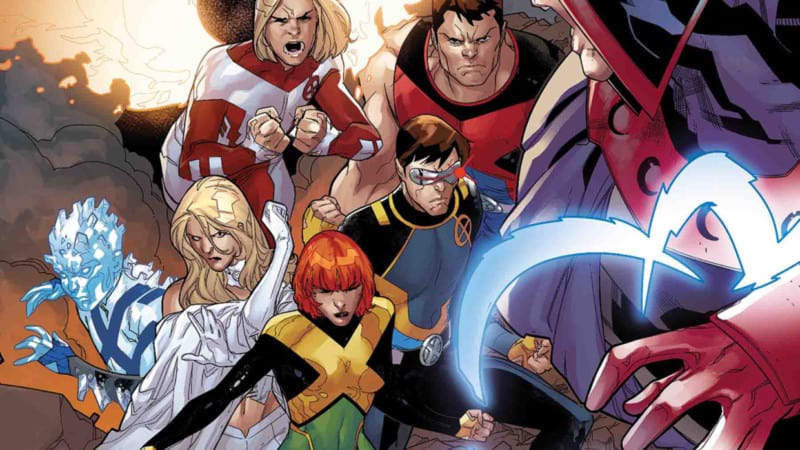 Magneto is back and badder than ever in X-MEN BLUE #31. With Jimmy Hudson gone for the time being, Teen Jean and her fellow time-displaced X-Men find themselves hunting their own mentor: Magneto. Cullen Bunn, Jorge Molina, and Matt Milla put X-MEN BLUE back on course with this issue after an unsuccessful Poison-centered arc. But, are their actions enough to keep this series afloat before its inevitable September cancellation? Keep reading to find out.

From the Ashes, Polaris Forms a New Team in X-MEN BLUE #25

In X-MEN BLUE #31, Magneto is on a vicious and deadly hunt for the perpetrators of the “M-Bomb.” If you read the X-MEN BLUE arc “Cry Havok” you’ll remember the Mothervine explosion, which transformed humans into mutants against their will. At the helm of these disastrous explosions were Havok and Emma Frost.

The Mothervine event made an already emotionally unstable Magneto snap. He promised to take down everyone associated with the explosions. It just so happens that the White Queen and the Hellfire Club are his first victims. This issue alternates between Magneto’s ruinous rampages and the young X-Men’s plans on how to stop him.


Back to the Past

If you didn’t know already, now you do: X-MEN BLUE is coming to a close in just a few months. The upcoming miniseries, EXTERMINATION, will most likely streamline the convoluted X-Men universe and send the time-displaced “Original Four” back to the past. Without them around, the original lineup for X-MEN BLUE is gone. Marvel could move some characters around and create a new Blue team, but I think they have bigger things planned. Or, at least I hope they do.

With its cancellation in mind, X-MEN BLUE #31 makes a lot of sense. For most of the issue, Bunn is essentially tying things off and setting up storylines for future X-Men series. He brings back two of the most famous X-Men, Magneto and Emma Frost, in order to slowly move the attention away from the O4. He also hints at the O4’s eventual “Extermination” by sliding in comments about the past and the future.

Things aren’t falling into place just yet, but the wheels are turning. Do I think this “Kings and Queens” arc is going to be the best arc in the history of X-MEN BLUE? No. But, do I think it could be a good midway arc that sets up future series and sends characters off in the right direction? Yes.

Who is the Master of Magnetism?

Magneto was the Blue team’s mentor (of sorts) for a while, so we’ve seen him a decent amount. However, we haven’t really seen inside his head very much since Jean and the other Blue teens usually take the spotlight. Even during the “Cry Havok” arc, we only saw glimpses into Magneto’s thoughts. For the most part, Magneto’s mind is as guarded to us readers as it is to a telepath like Marvel Girl.

History of the X-Mansion

Thanks to X-MEN BLUE #31, we finally get to see what lies beneath Magneto’s ever-present helmet. In a flashback scene, Jean does a little psychic meddling on Magneto to make sure he’s being honest with them. What she sees is startling. As one would imagine, Jean sees ghosts from Magneto’s time in WWII concentration camps. However, she also sees that the super-villain is still haunted by the idea of his own morality — or lack thereof. He thinks he’s inherently evil and cannot be good. His horrific actions against members of the Hellfire Club in X-MEN BLUE #31 lead us to believe that he may be right.

On the surface, this issue seems simple, but I think Bunn is really trying to get to the root of Magneto’s character. With someone who has as much history as Magneto, that isn’t an easy feat.

X-MEN BLUE regular, Jorge Molina, returns for this issue, bringing with him his signature style. Overall, I enjoy his detail-oriented line work, and I think his illustrations for X-MEN BLUE #31 are mostly successful. The backgrounds, in particular, are striking and really make this issue feel realistic.

My only complaint regarding the illustrations are the characters, especially the young X-Men. Age is a tricky thing in comics since timelines are so distorted. Still, I think the O4 X-Men are definitely in their late teens. They aren’t eating off the kid’s menu anymore, yet Molina’s drawings make them look like middle-schoolers who just wondered out of third block. Jean, in particular, is just too gangly and big-eyed to be taken seriously. I know Molina has the capability to draw characters well (Emma and Magneto look great), he just needs to apply those skills to the O4 a little more.

Marvel veteran Matt Milla brings a fresh palette to X-MEN BLUE that functions well with Bunn’s writing. Most of Magneto’s scenes are dark and saturated in cool tones, while most of the X-Men’s scenes are brighter and warmer in tone. Even without the dialogue, readers can see the dichotomy Bunn is creating between them.

If you haven’t read any of the X-MEN BLUE series, now isn’t the time to start. However, if you’ve read some of the series but became disillusioned by some of the Poison-centric arcs, now is the time to re-join the Blue fold. While you can tell that Bunn is trying to wrap things up, the story is still enjoyable and interesting. Instead of diving into something too big to handle within a few issues, Bunn is setting up characters like Magneto and Emma Frost for development outside of X-MEN BLUE. If for nothing else, I’d recommend this issue so that you can understand the current X-Men universe in yet-to-be-announced series.