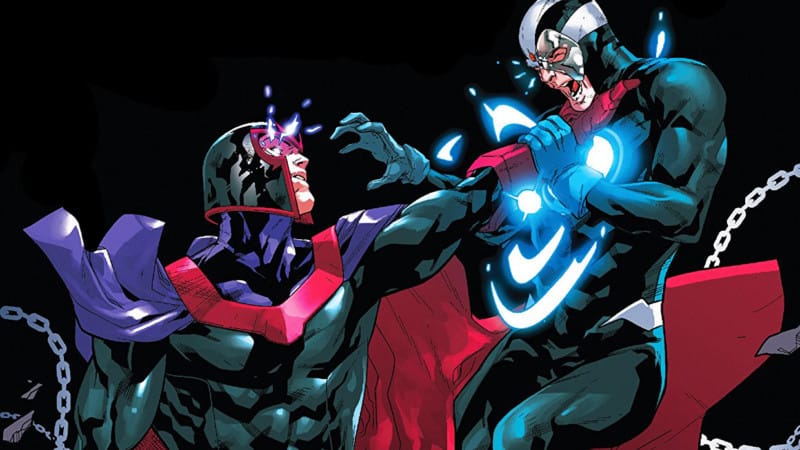 X-Men fans have a reason to be happy — very happy. Writer Cullen Bunn and artists Marcus To and Rain Beredo have finished the six-part “Cry Havok” arc with the release of the highly anticipated X-MEN BLUE #28. Finally, after reading and re-reading, I can say it: “Cry Havok” is a successful arc. It started out really poorly, had some crazy side stories, and rushed in a few places it shouldn’t have but overall, the past six issues of X-MEN BLUE have been exceptional. Before you start lecturing me on how poorly I rated X-MEN BLUE #23, I encourage you to keep reading. A rough start to an arc doesn’t mean it can’t end well.

Compared to past issues in the series, a lot happens in X-MEN BLUE #28. Magneto finally puts an end to Havok’s plans to use Mothervine for world domination, Emma Frost shows Miss Sinister who’s boss, and Havok gets a new outlook on life (sort of). The Mothervine mutants become homo sapiens once more and Xorn unleashes all of that power he’s been storing up since X-MEN BLUE #23. The end of the issue hints at a fight between Emma Frost and Magneto, but whether or not that will be realized inside the pages of X-MEN BLUE is unknown. What we do know is that the Original 5 will be back in X-MEN BLUE #29 (Teen X-Men fans rejoice!)

While it’s fun to see everything come together in the final issue of an arc, X-MEN BLUE #28 does this a little too well. The story is great, the characterization is on point, but everything happens a little too quickly and without enough explanation. For numerous issues, Bunn has painted Mothervine as mysterious and omnipotent. Its origins were unknown, its effects were still being discovered by the Blue team, and a readily available cure didn’t seem possible. I was already starting to wonder, by X-MEN BLUE #27, how they were going to handle the huge increase in mutants in other X-Men titles.

But, my question was quickly answered when, in X-MEN BLUE #28, Magneto whips out a cure and fixes everything. Havok’s similarly “fixed” within a page or two thanks to certain stars aligning. Because so much was left to the final issue, X-MEN BLUE #28 feels rushed and really coincidental. The only thing that doesn’t feel coincidental is Emma Frost’s sudden change to the “good” side. Since the beginning of the arc, Bunn’s been hinting at Emma’s unwillingness to submit to Havok and Miss Sinister. I wish that some of the other events from X-MEN BLUE #28 had been foreshadowed so thoroughly. Maybe then, it would feel a little more realistic and a lot less staged.

Beyond the unique concept of Mothervine, the thing that makes “Cry Havok” — and X-MEN BLUE #28 — so good is the cast of characters. From the misfit heroes that make up the new Blue team to the overdramatic villains of the Mothervine gang, Bunn chose wisely when picking who he wanted to star in his series during the O5’s absence.

All Female X-Men Lineup Takes on Classic Villainess Team in HUNT FOR WOLVERINE: MYSTERY IN MADRIPOOR #1

According to the cover of X-MEN BLUE #28, Magneto and Havok seem to be the protagonist and antagonist of the arc. While I do think Bunn gives them the most panel time and opportunities for characterization, I don’t think they’re the stars of “Cry Havok” — even if Bunn wanted them to be. Polaris and Emma Frost are, in my opinion, the ones who make X-MEN BLUE #28 a solid read. Magneto and Havok change very little over the course of the arc (keep in mind that Havok doesn’t change himself — Emma and Polaris do that for him). Emma and Polaris change exponentially from X-MEN BLUE #23 to #28. Emma realizes that in order to help mutantkind, she can’t allow people like Havok to manipulate her. Polaris learns how to be strong in triggering and emotional situations — like in a fight against her ex-lover Havok.

Who Needs the Spotlight?

Both Polaris and Emma could handle their own solo series after this arc. I think they’re both at really interesting points in their lives where they’re on the cusp of making serious decisions. Polaris hasn’t been an active character in years. Because of this, I’d love to see a series where she sorts out what she wants to do and who she wants to be. On the same hand, Emma is also currently trying to decide who she is and how she can help other mutants. A solo series where Emma tries to discover whether or not she should be “good” or “evil” would be worth its weight in gold to a White Queen fan like your humble writer.

Unfortunately, I highly doubt Polaris or Emma will get the attention they deserve anytime soon. Magneto is the big ticket character writers love to include. While a developed character in his own right, Magneto’s shadow is dominating. I hope characters like Emma and Polaris can remove themselves from the Master of Magnetism and grow to their full potential.

Comic Art at its Best

The artistic duo of penciller Marcus To and colorist Rain Beredo is beyond amazing. Overdramatic, I know, but really: these guys deserve a pat on the back for this issue. To’s line work brings comic art back to its cartoon roots — but his illustrations are anything but childish. Every expression, every figure, every background works perfectly. Usually, I think artists have one or two strong suits when pencilling. Being talented at everything — from bodies to buildings — is difficult. But I honestly think To is one of the most well-rounded artists on the comic scene at the moment.

Kitty and Colossus’ Decades Long Romance: From the First Kiss to the Wedding

Beredo’s colors only enhance To’s work. His palette is sophisticated and not overly saturated, which works well with the theme of the issue. “Cry Havok” is not a comedic or childish arc — it’s actually pretty serious. Beredo’s choice in colors (most of which lean towards grays and blacks) perfectly reflect that.

Cullen Bunn, Marcus To, and Rain Beredo end the “Cry Havok” arc on a high note with X-MEN BLUE #28. What began as a confusing and plot-muddled arc has turned into one of the Blue team’s most entertaining ventures yet. Five issues ago, I didn’t think Bunn could create a solid story using the introduced elements and plot points. The whole thing felt disjointed and poorly planned. It didn’t help that the Original 5 — who the series was created for — weren’t even featured in the arc. In my mind, “Cry Havok” was an unneeded interlude.

But, somewhere between the first installment and the sixth, Bunn created something worthy of the X-MEN BLUE title. Even though Cry Havok didn’t star the O5 team that the series began with, Bunn used the new characters expertly. The classic X-Men Magneto, Emma Frost, Polaris and Havok easily steal the show and make the arc into a sort of 1980s homage. This final issue ties up everything Bunn started while still tempting readers with new stories to come. X-MEN BLUE fan or not, X-MEN BLUE #28 — and the entire Cry Havok arc — are definitely worth a read.