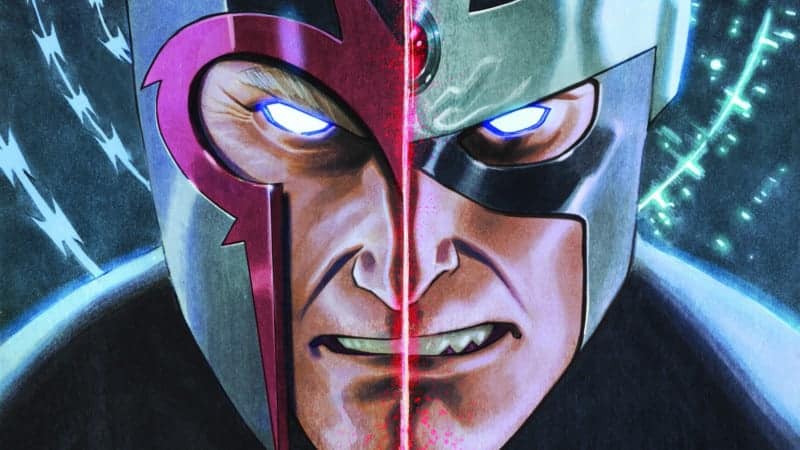 Like all things that are said to do wonders (for only $19.99!) the mysterious Mothervine mutant enhancer in X-MEN BLUE #24 is actually incredibly dangerous. I’m sure none of you dedicated readers saw that one coming. It’s not like “Kick” or “Toad Juice” had any dangerous side effects, right?

Jokes aside, X-MEN BLUE #24 does a good job of bringing classic X-Men themes (like power-enhancing drugs) into a modern comic. It also avoids the character confusion seen in X-MEN BLUE #23 and gives some needed exposition on X-Men history. Still, writer Cullen Bunn and artists Jorge Molina, Matt Milla and Jay David Ramos‘ newest issue is not without fault. The second installment in the “Cry Havok” arc really struggles with subplots. With so many characters and stories compacted into one issue, the comic becomes difficult to read and understand. While each story on its own would be a fascinating read, all of them combined make for a bit of a headache.

The issue begins with the eagerly awaited fight between Sebastian Shaw and Magneto. Thanks to his souped-up powers, Shaw is pretty much unstoppable — even against Magneto’s attacks. Unfortunately for the head of the Hellfire Club, Mothervine’s mysterious side effects instantly drain him of his powers. Without them, Magneto could easily kill him. But, the Master of Magnetism has other plans. He takes Shaw to a Lighthouse, where he’s meeting with the other members of the Mothervine gang. Havok warns Magneto that Mothervine is more than just a fancy secondary mutation that happens to have some shady side effects. It, according to Havok, has the ability to change the world. We, as readers, still don’t really know what the hell this thing is.

Mixed in between sections of the larger plot are smaller subplots that sort of connect. In a few panels, Xorn, the Marauders, and the other half of the Blue team (Jimmy Hudson and Bloodstorm) fight in the desert. The Blue team is able to escape, with the injured Xorn in tow. Another few pages are dedicated to the Malice-possessed Polaris, who nearly destroys the Blue team’s headquarters in a rampage. Before she can do further damage, the real Polaris psychically kicks her out. Lastly, Briar Raleigh tracks down Daken and offers him some adamantium swords in return for joining the Blue team. His answer is unclear, but by the looks of future covers, he agrees.

Too Many Stories, Not Enough Panel Time

X-MEN BLUE #24 is an interesting issue that could’ve easily gotten a high score from me. While it’s still playing with a lot of characters, Bunn does clarify Polaris’ background, which was something I had wanted to see in X-MEN BLUE #23. Overall, everything works pretty well. The only problem is there’s way too much going on. Comics always have a couple of different things going on in a series, but the number of subplots in X-MEN BLUE is a little high. As someone who loves reading and analyzing comics, I’m having a hard time keeping up with all of the different conflicts currently happening. I know in the future they’ll all connect, but at the moment it’s overwhelming.

I wish this issue had focused more on Magneto and Mothervine instead of trying to include so many storylines. Mothervine is an interesting concept that is being slowly unpacked from issue to issue in X-MEN BLUE. X-Men comics have seen the idea of mutant enhancers before, but Mothervine takes that concept to the next level by making it a much more serious threat. Bunn’s created a really enthralling plot…but the inclusion of the other subplots just makes for a confusing issue.

Everyone’s favorite body-possessing super villain makes a comeback in X-MEN BLUE #24! A long time ago, within the pages of UNCANNY X-MEN, Malice possessed Polaris and made her do some pretty terrible things. For a minute or two, it looks like the same thing is going to happen in this issue. Thankfully, the past doesn’t repeat itself and Polaris prevails, pushing Malice out of her consciousness.

I’ve already said how I feel about the many storylines within X-MEN BLUE #24, but I’m actually glad Bunn included these few scenes with Polaris. They show some important character development — even if they (seemingly) aren’t essential to the larger plot. Since her introduction back in 1968, Polaris has changed so much as a character. This, unfortunately, makes her difficult to write. She isn’t the same character who Malice possessed, nor is she the same character who fell in love with Havok. Bunn takes this into account, which is why Polaris so easily overpowers Malice. Tons of writers would have made Polaris’ possession last an entire arc. But Bunn uses only a few panels in order to show the transformation Polaris has undergone in the past few decades.

As great as it is to have numerous artists work on a series, it’s also nice to see a series that uses a (mostly) consistent style. X-MEN BLUE has seen other talented artists, but Jorge Molina is undoubtedly the artist most associated with the series since his illustrations extend all the way back to X-MEN BLUE #1. His simplistic style may not be for everyone, but I think overall he does a great job telling a complicated story through images.

Polaris: The Iconic X-Men Hero Who Endured When All Was Lost

The thing that I appreciate most in Molina’s art is his clever use of composition. For a lot of people, comic book art means two things: people and buildings. But, those things are really only the first step. While it’s important to be able to draw superheroes fighting, it’s also important to understand composition — as in how the people and buildings are arranged in the panel and how that panel functions on the page. Molina frequently places wide shot action poses against close-ups, which makes the story flow like a film. Not only does that make the pages feel more balanced to the eye, it also sort of makes the pages themselves disappear. Instead of simply reading a comic, you’re inside the story.

X-MEN BLUE has gone through multiple ups and downs. Some weeks it’s amazing and other weeks it’s lacking. This week, it’s somewhere in between. Bunn is introducing way too many plots in this issue, but, for the most part, the stories are interesting. Polaris’ character development is spot on and Magneto’s battle with Mothervine-induced Shaw easily kept my attention.

In future issues, I’d like to see fewer plot points explored in more depth. With Magneto, Polaris, and Emma Frost playing big parts in this series, I know it has a lot of potential.