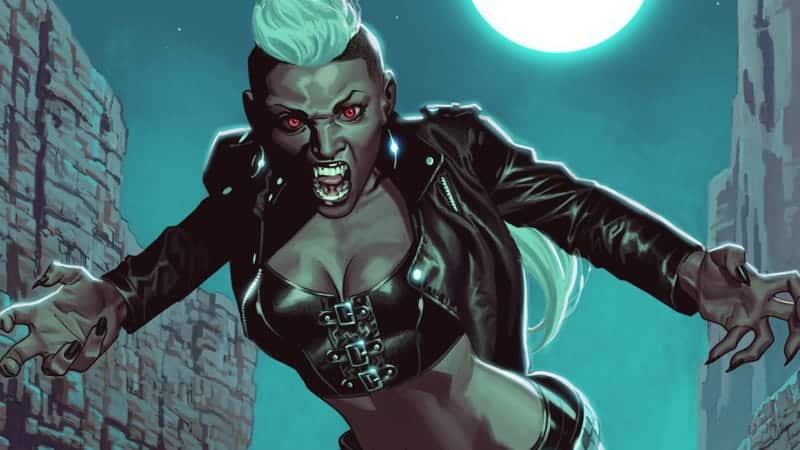 Writer Cullen Bunn and artists Jorge Molina, Matt Milla, and Jay David Ramos‘ first issue in the Cry Havok arc brings both a new and familiar cast of characters that will leave readers eagerly awaiting the next issue. The Blue team gets a series-changing makeover in X-MEN BLUE #23! With the time-displaced teenage X-Men lost in space, it’s up to Magneto, Bloodstorm, Jimmy Hudson, and Polaris to keep mutantkind safe. But, with Miss Sinister, Emma Frost, Bastion, and Havok on the loose, the challenge hardly looks surmountable. However, while it’s exciting to see X-MEN BLUE change direction, the new storyline requires a lot of background knowledge. Even enthusiastic readers (like your humble writer) may struggle with connecting all of the pieces Bunn lays out in X-MEN BLUE #23.

The fates of the time-displaced X-Men are unknown at the moment, which leaves the Blue team’s home base in Madripoor short-handed. Luckily for Magneto, he still has some of the most badass mutants in the business at his disposal, including Polaris, Jimmy Hudson, and Bloodstorm. Thanks to a hint from the Raksha, Magneto discovers that Emma Frost and the Hellfire Club have already invaded Madripoor. Knowing this, he decides to visit Sebastian Shaw. Unfortunately for Magneto, Shaw has developed a secondary mutation that allows him to pull kinetic energy from the air around him. He calls this power “Mothervine” and according to Shaw, it’s going to save mutantkind.

The scene shifts to Bastion’s lab, where the sentinel scientist and Havok are readying themselves for something big. They meet with the other members of their villainous gang (Emma Frost and Miss Sinister) to review their plan. According to Sinister, the mysterious “Mothervine” will quadruple the mutant population overnight. Although things seem amicable, Emma and Havok assume the others will betray them. They plan to betray Sinister and Bastion before that can happen.

While in the Mojave desert for a mission, Jimmy and Storm come across a version of the Marauders from a different reality. With them is a mysterious figure who reveals himself to be Xorn. He gives a cryptic warning to the team before the scene changes. Back at the Madripoor mansion, Lorna encounters a strange necklace found in Teen Jean’s drawer. When she looks into the strange mirror pendant, she becomes (once again) her worst nightmare: Malice.

Episode 87: Celebrating the X-Men Women in a Post-Trump World

This issue is the exact opposite of a good jumping on point for people eager to learn about the world of X-Men. While it offers an enthralling transition point for the Blue team, it can be confusing at times. Not only do readers need to have a firm grasp on the events in earlier X-MEN BLUE issues (particularly #1-12), they also need to know a lot about Havok and Polaris’ pasts.

The best example of this phenomenon is Havok’s appearance in X-MEN BLUE #23. Havok has appeared in the series before, but this is the first time we see just how low he’s sunk. He’s now working alongside classic X-Men antagonists and just generally being terrible. For new readers, this might be shocking. Polaris does give a short exclamation, citing a change in his personality as the reason for their breakup. But what caused this change?

During AXIS, Havok was affected by the inversion spell. The spell was originally cast by Doctor Strange and Scarlet Witch in an attempt to separate Red Onslaught and Charles Xavier. Unfortunately, it didn’t work as planned and negatively inverted numerous superheroes, including Havok. His morals were dramatically altered, and he became a murderous psycho. After AXIS, most of the other heroes affected were restored to their normal selves, but Havok escaped before that happened.

With these events in mind, Havok’s devotion to evil makes a lot more sense. I don’t think there’s anything wrong with including past events in current comics, since comics build on one another. Bunn does mention reading AXIS within the issue, but I still would’ve liked to see a little more exposition. X-MEN BLUE #23 jumps right into a new story, with a new cast of characters, but it lacks needed explanations.

Realistic Art with a Touch of Style

Molina’s pencils are good; I wouldn’t go beyond that, but he does a sufficient job illustrating the story. His drawings are realistic with a touch of stylization that, for the most part, works well. Occasionally the characters aren’t as expressive, but that is a minor problem. Overall, Molina does a very good job with the work he has been given.

As a bit of a side note, the female sentinel robot seen in Bastion’s lab looks strikingly similar to X-MEN RED’s Jean Grey. The headgear of the robot is nearly identical to Jean’s Red uniform and the hair is a little similar too. It doesn’t seem like there’s any real connection there, but it would interesting if there was. Perhaps Molina is trying to hint at something coming in the future? A crossover between the two teams would be epic and a great way to kick off a new Blue team. At the moment, we can only hope.

X-MEN BLUE as a series has been delivering solid issues for the past few months. The Poison-X arc was one of the best arcs in the series so far. The art, plot, and characterization have been on point. I think X-MEN BLUE #23 is a needed change from the other Blue team members (who’ve been in the spotlight a lot recently). But it isn’t an easy read. The inclusion of Malice, Havok, the Marauders, and Xorn really complicate this issue. I honestly don’t have enough room in this review to explain all of the elements in this issue that need further explanation beyond what Bunn delivers.

In the future issues of the Cry Havok arc, I hope to see more explanation. It can be fun for diehard X-Men fans to test their knowledge in issues like X-MEN BLUE #23, but for a lot of casual fans, these issues make a series difficult to understand. At the end of the issue, Malice possesses Polaris again. Without prior knowledge, this probably doesn’t mean a whole lot. But, for readers familiar with Polaris’ history, Malice is one of the most important characters in Lorna’s life. Bunn will need to stress that point and give some more background on Havok’s transformation in order to make the next issue impactful.