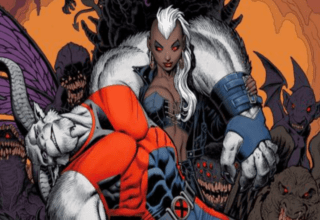 X-MEN BLUE #11 raises the stakes for our young squad as X-Man is pitted against X-Man. In the previous issue, the Goblin Queen transformed Hank McCoy (aka Beast) into a diabolical monster. Through this transformation, the Goblin Queen was able to welcome her Hex Men into the universe. This installment of X-MEN BLUE proves to be a nonstop adventure through Cullen Bunn’s writing prowess. The challenges our X-MEN face continue to harden as the young mutants must force themselves to be ready.

X-MEN BLUE #11 kicks off immediately where the last issue left off. The X-Men are suddenly at war with former allies under the control of the Goblin Queen. Because of this, the psychic connection between Jean Grey and Cyclops is tested. Despite the two having previously expressed apprehension regarding their shared psyche, they somehow make it work when their unity is necessary. Their ability to creatively overcome obstacles during battle through their connection adds some intrigue into their relationship.

Perhaps the most impressive narrative aspect of this issue, though, is the way the personal backgrounds of supporting characters, such as Colossus and Storm, interweave with the issue’s main plot. They are not clunky or boring. Rather, they prove to be relevant companions to the events taking place throughout the issue. With this, they also provide parallels to the conflict surrounding the Dark Phoenix and Jean Grey. These sequences ultimately show the vulnerability of a hero in regard to the power of dark influences.

READ: Need to catch up? Check out our review for X-MEN BLUE #9!

Though X-MEN BLUE #11 has some fantastic moments that focus solely on characterization, the issue specifically excels in the depiction of its action sequences. They are chaotic and intense, thanks to the artwork, while also impressive in regard to the fortitude of the X-Men themselves. These moments truly showcase Jean Grey’s leadership capabilities as well as the particular significance of her relationship with Cyclops. So, X-MEN BLUE #11 certainly succeeds in balancing action with necessary character development.

The epic action sequences that open this issue are beautifully executed. Illustrator Douglas Franchin exhibits some wonderfully intricate work. He never fails to showcase every detail of backgrounds and characters in every panel. Franchin also captures the scale of the battles taking place while juxtaposing that vast scale with the intimacy of the characters’ perspectives during the battle. This is perhaps most noticeable when Jean Grey is working through her psychic connection with Cyclops to survive the fight.

READ: Get our perspective on the state of the X-MEN film franchise here!

In collaboration with Franchin, the colorist known as Guru-eFX sets the tone for this installment. It is an excitingly colorful issue that never exhibits a dull moment. With this, I love the color palette change in the sequences that depict background information on specific characters. In the panels that showcase Colossus, Pixie, and Storm’s pasts, the issue segues briefly into a darker setting. These sequences certainly augment the depth that the narrative provides the issue with.

Ultimately, the artwork of X-MEN BLUE #11 embodies a chaotic energy, in a good way. This energy showcases the strength of the X-Men, as they are able to take on such intense opposition. With this, the chaos is totally compelling. It draws you in and keeps you invested in the story as our young X-Men are given the opportunity to truly prove themselves as heroes.

The Wars to Come

As the plot intensifies and the primary characters continue facing their own personal conflicts, readers will be left anticipating what is to come after X-MEN BLUE #11. As the series has progressed, we have witnessed this young X-Men squad grow into the heroes we know and love. So, what will become of our beloved X-Men? We’ll just have to wait and see.