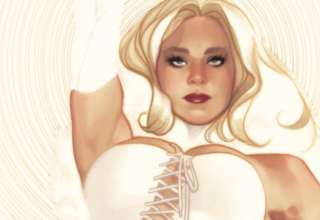 Emma Frost and Leah Williams deserve our attention. Whether you like Emma Frost or not, X-MEN BLACK: EMMA FROST #1 is, in short, a really good issue. No, it isn’t a perfect issue, but it comes frighteningly close. In just a few short pages, Williams and artists Chris Bachalo and Antonio Fabela completely up-end Emma’s current character, giving her a new title and a new role in Marvel comics. Unlike the other issues of X-MEN BLACK (all of which were honestly pretty good), X-MEN BLACK: EMMA FROST #1 finally gives fans something that will stick around after the end of the X-MEN BLACK miniseries. Williams delivers the version of Emma we’ve all been waiting for and, to no one’s surprise, she doesn’t disappoint.

The Hellfire Club has been a near constant element in recent X-MEN comics. In X-MEN BLUE, the dangerous Mothervine finds its roots in Shaw’s grubby paws. According to Emma, recent sentinel attacks can be traced back to the evil organization. In order to take down this massive threat, Emma contacts the X-Men — and more specifically Rogue — in X-MEN BLACK: EMMA FROST #1. They agree to help and, within a few panels, the organization is in tatters. At the end of the issue, Emma’s back on top and sporting a fresh crown.

Who is Emma Frost? Post INHUMANS VS. X-MEN, that question is almost impossible to answer. For years, it had been clear: teacher, surprisingly loyal girlfriend, and, most importantly, a member of the X-Men. Emma was as official as any of the other X-Men until the death of her boyfriend, Cyclops. After that, she left the X-Men and has been sort of floating around from place to place ever since.

X-MEN BLACK: EMMA FROST #1 finally gives her some meaning. A lot of fans noted that her first outfit (the one she wears to the aptly named Malmart) doesn’t look like her normal attire. Covered in buckles and spikes, this version of Emma looks like she just walked off stage at Warped Tour. It’s far from her elegant bustiers and capes, but, surprisingly, it makes sense.

This issue is about Emma finding her footing again. She’s questioning who she is and who she wants to be. When she’s talking to the X-Men, she proudly displays an X insignia, but once they’re out of sight, she trashes it. While hijacking the building, she models her classic white uniform. By the end, she trades white for black and becomes something totally different. These wardrobe changes seem frivolous, but they actually mirror Emma’s changing alliances and identities. It’s pretty fitting, considering her predilection for fashion.

What About the X-Men?

The only thing that takes this issue down from being perfect is, strangely enough, the X-Men. Emma briefly talks to Rogue at the beginning, and we see them again at the end, but in-between they might as well just not exist. For the plot to work, they needed to be there. But, their panels and dialogue are so small that their roles in Emma’s plot naturally feel insignificant (even though she did really need them).

All of the X-MEN BLACK issues could have done with a little more time. Instead of adding the Apocalypse story at the end of each issue, I would’ve liked to see more of the spotlight character’s arc. The addition of just a few pages can do a lot for a story. Emma’s story doesn’t need any more fleshing out, but Rogue and the other X-Men could’ve benefitted from more panel-time.

If you didn’t know it already, Chris Bachalo is a comic book legend. Co-creator of GENERATION X (which heavily featured Emma), Bachalo is an X-Men veteran who knows these characters better than most. Artistically, his quirky style matches the eccentric nature of the X-Men, and of Emma, perfectly. Paired with Williams’ witty writing, Bachalo’s perfectly proportioned cartoon-inspired work makes the piece both lighthearted and disturbingly real. That’s a difficult line to teeter on, but somehow Bachalo makes it work.

Fabela offers a compelling palette that also helps to bridge the gap between cartoon and reality. Some panels, like the ones in the Hellfire Club lobby, look tantalizingly real. Others, like the ones in Shaw’s red soaked room, border on otherworldly. It’s that contrast that’s the signature of a successful coloring job.

So, where do we go from here? X-MEN BLACK: EMMA FROST #1 begs the question, and so do I. This issue left me ready for more Emma Frost characterization and, from what I can gather from that explosive ending, more is coming. Emma is clearly pretty tired of Marvel editors shelving and dismissing her character. The time of Emma being a strong character, with a backbone that isn’t connected to the X-Men, has finally come.