It’s finally there! After last week’s release of the official film poster, we can now get a first glimpse at the end of a—thus far—incredibly well-done movie trilogy with the first official trailer for X-MEN: APOCALYPSE!

Let’s take a closer look at the content of this trailer as well as some shots in particular and find out/ speculate as much as we can about what we can expect from the finished flick.

The trailer’s opening shot might be one of its most mysterious. We can see a slim person walking into what could be an opening Cerebro door. While at first glance it just looks like a human woman, presumably Raven, Moira or Jean, the head doesn’t look quite natural, and maybe it’s possible that this is already… Apocalypse himself? The soft focus as well as the background music make this scene feel kind of dreamy and surreal, which might indicate that it’s already part of Jean’s dream.

After different images of destruction and explosions flashing, a teen-age Jean Grey, portrayed by Sophie Turner, awakes from a nightmare. Her words—”I saw the end of the world. I could feel all this… death”—implicate that she either has some sort of clairvoyance ability, or that she telepathically witnessed Apocalypse’s fantasies, the latter of which I think is more likely. In this scene, Charles is trying to calm her down, but yet looks concerned: Maybe this is where he starts realizing that she has incredible abilities he has to suppress? This was a major topic in the original trilogy, in which his actions actually led to the creation of her Phoenix persona.

Love young Jean? Check out our review of EXTRAORDINARY X-MEN #3!

After some logos, an Apocalypse voiceover is saying: “I’ve been called many things over many lifetimes. Ra. Krishna. Yaweh.” We’ll get to learn how this universe’s En Sabah Nur has seemingly inspired various religions over the years later. In this shot, we can see a cloaked Apocalypse trying to convince a younger Storm to follow him. Along with the quote from the voiceover, this shot fits nicely into the “God” theme, with Apocalypse giving Storm something to believe in (since her actress, Alexandra Shipp, already confirmed in interviews that this is what Ororo is longing for).

We also get our first look at Caliban, who is supposedly locating Storm and the other soon-to-be Horsemen for Apocalypse.

The trailer now starts to exposit a lot. During a visit of Charles and Havok at a CIA headquarters, Moira explains Apocalypse’s origin as the world’s first mutant, and she says that some sort of religious cult has developed around the belief that mutants are related to God—an interesting take, considering that in the comic books, William Stryker managed to get a whole lot of people to believe that mutants were created by the Devil.

The trailer doesn’t convey too much information about the current state of the relationship between Charles and Moira, though. After their kiss, the SUPERMAN 2-like mind-wipe and her absence from the last movie, I’m curious to see what role she will be fulfilling now, 20 years after the events of FIRST CLASS. 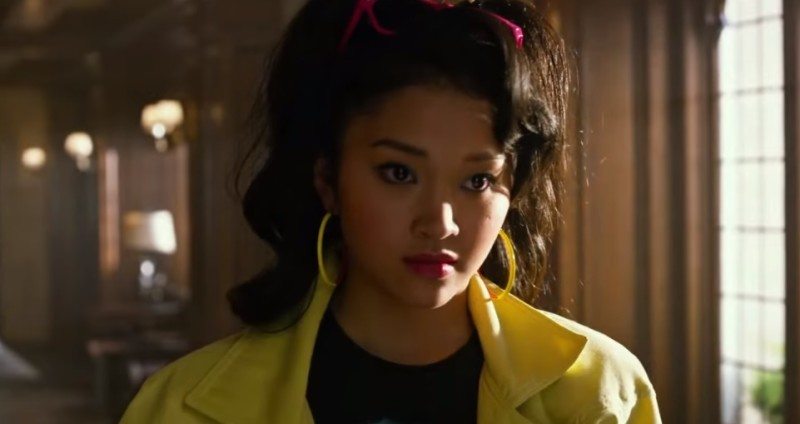 Back to the Apocalypse voiceover. Apocalypse keeps talking about how each mutant is one of his children, and we get short glimpses at some important mutant characters, including the young versions of Nightcrawler and Jubilee. While Nightcrawler looks exactly the way we would expect a younger version of Alan Cumming‘s X2 version of the character to look, Jubilee looks extremely colorful, 80-ish and true to the source material.

The next shots is one of my favorites in the trailer. What we can see here is Professor X happily teaching a class in his reopened Xavier School. This will not only be the first time we see the opened school in the prequel trilogy, as Charles will apparently also have recovered from the depression he suffered from during DAYS OF FUTURE PAST and found peace with himself and his school.

The trailer continues with more exposition when Moira references the four Horsemen, who we also glimpse briefly: Magneto, Psylocke, Archangel, and Storm. There’s a surprisingly huge amount of exposition in this trailer, and there’s little secret in who will be taking which side of this battle. Discussing the Four Horsemen, Havok also brings up the similarities to the bible counterparts, to which Moira responds by saying, “Maybe the Bible got it from him.” This is one of the most interesting things about this trilogy of X-Men films: the way the mutant world coalesces with the real world by relating historical events to mutants and mutant powers.

RELATED: What I think the Horsemen’s arcs could look like!

Back at the Xavier School, Charles is discovering the extent of Apocalypse’s persuasion powers through what is probably Cerebro: “Oh God. He can control all of us.”

In the next shot, on the floor in front of the Cerebro door, Charles’ wheelchair is being pulled back by Magneto. Given the way that Charles’ head is hanging, he seems unconscious already. I’ll get back to what I think exactly happened between this scene and the last scene in a bit. Also: Notice that Raven is concerned about Charles the most. Their relationship seems to have grown a lot more intimate again, and maybe they’re slowly going back to the brother/sister relationship they had developed in FIRST CLASS.

This is the first time we see not only Apocalypse’s face but also all the Horsemen at once. And, I think we all have to admit that in this shot, he looks a lot less similar to Ivan Ooze than fans initially feared he would.

While Raven states in a voiceover that she’s with the X-Men “to fight”—indicating that she has turned her back against the Homo Sapiens discrimination ideology of Magneto and that she wants to fight along Charles’ side—we see the team all in black uniforms, hovering towards their next mission in the Blackbird. In several scenes in the trailer (and some of the character portraits released ahead of time), it seemed like we’d see more colorful costume design in X-MEN: APOCALYPSE, but this seems like a clear regression back to the all-black uniforms we know from the original films.

Here’s another thing: Do you notice Charles’ absence from this scene? I think it’s quite possible that after his wheelchair had been pulled towards Apocalypse in the previous scene, Xavier was kidnapped by the Horsemen.

This next shot is interesting not only because we barely know anything about it and it’s hard to put into context, it’s also the only shot in the trailer that gives us blue Mystique. This could be because, after the events of DAYS OF FUTURE PAST, Mystique in her natural form has become a public figure—the woman who saved the president, after all. So, I definitely think we’ll be seeing how she deals with that.

This is where we finally get an impression of what young Cyclops’ arc will be about. “Not all of us can control our powers,” he tells Raven. This version of Cyclops is a lot less experienced than the douchebag leader we know from the original trilogy, and he has a hard time getting his optic blasts under control, probably fearing that he will hurt others. I think this version of the character will be a lot more true to the source material, and the large fanbase that has built around the character in the last few years won’t be as disappointed. Also, we get a first glimpse of what is either the destruction caused by Apocalypse or a Danger Room scenario.

CHECK OUT: Love Cyclops? Want to find more about his arc in the comics?

Raven seems to have taken the position of a leader, training this new generation of mutants. The stakes are clearly high this time: “This is war,” she says, followed by a shot of the unified black uniforms that make the teenagers seem like soldiers. Interestingly enough, there are no hints in this trailer as to how or if the movie will deal with Raven being Kurt’s mother. But, since there will already be a father/child plot going on with Magneto and Quicksilver—and since the movie seems crammed anyhow—I think it’s most likely that this aspect of the character will be ignored. (Still, Nightcrawler actor Kodi Smit-McPhee did hint at something: “But as I said, all of the traditional things that we want in it-it’s still there. Hint, hint.”)

I think the biggest concern among fans was that Apocalypse would not seem menacing enough. This shot is the ultimate proof that these concerns are unfounded. He apparently even seems to have his shapeshifting ability from the comics, allowing him to grow bigger and appear even more intimidating. Then again, this could be a dream sequence: Charles is not sitting in his wheelchair, and why would he try to fight Apocalypse with his fists in his mansion in the middle of the night? And how is Apocalypse that big but the house is not falling apart? And where are his legs? So, it’s not impossible that this scene is taking place in someone’s mind, since the whole concept seems surreal.

With a lot of explosions in slo-mo and many sequences of Quicksilver running through the school, I’m pretty sure Peter, who was a fan-favorite character from the very beginning, will be the one to save the day in this flick.

Archangel’s powers seem to work in a similar way to how they work in the comics, with Apocalypse having given him new, metallic wings that allow him to shoot metallic shards.

This next shot alone should tell us how high the stakes actually are. Keep in mind: This movie is going to be an extinction-level disaster movie.

“From the ashes of their world, we’ll build a better one!” After showcasing what the Horsemen are capable of, the trailer gives us this sequence with En Sabah Nur supposedly browsing through the Cerebro interface. Is it possible that he’s using Charles to get access to Cerebro? It would confirm my earlier thoughts about how the Horsemen kidnap Charles in order to achieve something.

And it’s being backed up by this shot, presumably taking place right after the previous shot with Charles using Cerebro, this time with him saying, “I’ve never felt power like this before,” and his eyes turning black. Maybe this is where he is being corrupted by Apocalypse, shortly before losing consciousness?

Here’s an interesting thought. James McAvoy recently stated this about why Charles will go bald in X-MEN: APOCALYPSE:

He ends up going through something so horrible and physically painful that he literally half pulls his hair out/half it falls out. Maybe, or maybe not…I just shit myself because I know Fox Studios who own me might be angry with me for sharing that.

What if this horrible thing happening has something to do with him being corrupted by Apocalypse and kidnapped by his Horsemen?

Taking a closer look at this trailer definitely helped getting a better idea about what Fox is planning to do with some of these characters, and, overall, I’m pretty impressed. What did you think?