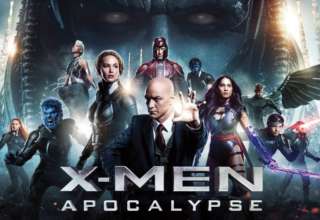 Leaving the cinema after watching X-MEN: APOCALYPSE, probably the first thing I thought to myself was: it’s gonna be really hard to be objective in my review of this film. Whether you’ll find yourself disappointed or blown away by the latest cinematic installment in the X-Men franchise depends heavily on your expectations going in. Therein lies the reason the film is leaving fans and critics so divided.

After a gripping introduction that sets up the film’s titular antagonist and creates a lot of tension from the get-go, we’re thrown right into the year 1983 with its many new mutants and changes in status quo. This first act might bore the casual moviegoer, but you’ll enjoy it if you’re committed to the mutant world—especially if you’re a fan of the comic source material. The film spends significant time introducing younger versions of iconic X-Men Cyclops, Jean Grey, and Nightcrawler, and they all continue to develop as characters throughout the movie. Their origin stories and some of their character traits differ slightly from the source material, but the movie always stays true to the spirit of the characters.

This isn’t the only way APOCALYPSE panders to comic book savvy viewers. We get costumes ripped directly from the comics and long-awaited big-screen depictions of certain powers and concepts. Most remarkable, though, is that this is the first X-flick to capture the X-Men’s essence as a family. While DAYS OF FUTURE PAST was a great superhero movie, it didn’t explore the X-Men’s nature as a team. That’s what the trilogy’s third entry gets right. The overall level of fan service in APOCALYPSE is probably the reason this film is more divisive than its prequels: it takes a lot of background knowledge to truly appreciate what’s happening in the movie.

LISTEN: Don’t miss out on our interview with fan-favorite X-MEN writer Chris Claremont!

That said, faithfulness to the source material is far from the only thing that makes X-MEN: APOCALYPSE outstanding. DAYS OF FUTURE PAST verged on being a character drama, with far more focus on characterization than the average superhero film. APOCALYPSE lacks that focus, but it still grants almost every character his or her own arc, managing a huge cast just as well as CAPTAIN AMERICA: CIVIL WAR did. Some of the mutants don’t get much screen time, but they’re even more three-dimensional than what we’re used to in X-Men movies. The antagonists, though, are an unfortunate exception to this. We learn virtually nothing about Psylocke or Angel or their motivations for joining Apocalypse, making their recruitment less believable and somewhat dull.

That leads to one of the biggest failures of the film: the titular antagonist, Apocalypse. Some have argued that the movie wastes Oscar Isaac’s talent on a walking bad-guy cliché with overused world domination fantasies. Again, this probably depends heavily on your expectations heading into the film. As a reader of the X-MEN comics, I expected En Sabah Nur to be a menacing social Darwinist with a god complex, which is exactly what we got in the finished film. Some of his lines feel like they’re pulled straight from Friedrich Nietzsche’s THUS SPOKE ZARATHUSTRA, and his arrogance and power lead to several seriously impressive scenes throughout the movie. Moviegoers who aren’t as familiar with the character, though, could easily find some of this stuff corny.

LISTEN: Head over to our podcast revisiting the 90’s classic AGE OF APOCALYPSE!

APOCALYPSE doesn’t reinvent the wheel in terms of either the main antagonist or the plot, but it offers some very effective versions of the typical superhero movie fare. It one-ups some of the best parts of the series’ previous films, with even the (perhaps unnecessary) Hugh Jackman cameo ranking among the best Wolverine scenes in the series. Despite some retread, APOCALYPSE still has a fresh feel to it.

For those whose appreciation for X-Men stories falls short of worship, the film still has a lot of redeeming qualities. The underlying argument—Apocalypse’s social Darwinism versus Charles’ “compassion” argument—works well and feels like an appeal to the audience at times. This installment also offers some of the series’ most emotional scenes of mutant discrimination and otherization. APOCALYPSE is a film with some heft; it definitely has something to say, even if the analogies and references of the previous two films felt more varied and “smarter.”

Visually, the movie’s CGI is generally outstanding, though the film does look too digital in a few shots. The action sequences are staggering and exciting, including yet another extraordinary Quicksilver scene (which reportedly took a month and a half to film). APOCALYPSE is also just as effective of a period piece as FIRST CLASS and DAYS OF FUTURE PAST, dropping viewers straight into 1983. This one could have interwoven more of that era’s politics—it was the Reagan era, after all—but it fits nicely into the arc set up by its prequels.

And, of course, the characters are beautifully cast. One of the film’s highlights is Sophie Turner’s performance as Jean Grey, as she manages to show us both the strength and insecurity that make the character special. Fans of Brian Michael Bendis’ ALL-NEW X-MEN will love that depiction, and I personally thought she was the perfect choice for a young version of the character. Tye Sheridan and Kodi Smit-McPhee add a lot to the younger versions of their respective characters, while Jennifer Lawrence, James McAvoy, and Michael Fassbender turn in characteristically strong performances.

Ultimately, it wouldn’t be fair to rate X-MEN: APOCALYPSE in a point system, because it’s perceived so differently by different people. As an X-Men movie, I’d rate it 9 out of 10; as a movie movie, it probably drops to 7. Yes, the plot is predictable, the antagonists lack some nuance, and it misses some opportunities, making this film far from perfect. Still, loose ends are tied up and character conflicts are resolved, while flashbacks and references to the events of FIRST CLASS make APOCALYPSE an efficient and effective finale to this trilogy. Die-hard fans will be particularly appreciative of the fan service and the true-to-source characterization. For some, this will be just another mediocre superhero movie, but it’s the X-Men film many fans have been waiting to see for 16 years.