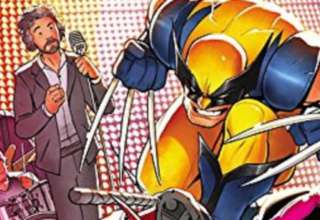 90’s kids rejoiced when Marvel created X-MEN ’92 , a new series featuring the versions of the X-Men cast shown in the classic 1992 animated series. While not a perfect recreation of the fan-favorite show, the comic managed to be a throwback to a simpler version of the X-Men, with bright colors, strong storytelling, and familiar designs. Now Marvel has released a new collection of issues 6-10 in X-MEN ’92: LILAPALOOZA.

READ: If you like comics turned into TV, see our approach for X-Men on the big screen.

Just looking at this book is a throwback. While the artwork from Alti Firmansyah adds far more bright colors and a hint of anime design to the proceedings, the classic designs of the 90’s X-Men are still in place, from Wolverine’s jeans and flannel jacket combo to Professor X’s hoverchair. The changes manage to bring it away from the original show (which looks a tad too serious now) but honor it at the same time. It feels like an update, not a redesign, and the book is all the stronger for it. It also helps the book stand out from the current run of X-Books, in which fun isn’t always a factor.

As for the story of the collection… well, that’s also fun, but it also carries with it a theme of expansion and an approach that’s almost “throw it against the wall and see if it sticks.” The strange thing? It generally works. The series starts with the X-Men protecting a mutant/human concert (LILAPALOOZA) put on by former space-criminal-turned-musician Lila Cheney (with such opening acts as Rick Jones and the Nega Band, and the actual Flaming Lips). Writers Chad Bowers and Chris Sims are clearly fans, and their sense of fun with the material helps make the book easy to get into.

Just because it’s fun though, doesn’t mean that they can’t dip into the classic elements the original show always had, such as its penchant for space. The intergalactic peacekeeper Death’s Head arrives to take Lila into custody for her criminal past, prompting the first of many fights before Abigail Brand, head of S.W.O.R.D. arrives. Before she can slap legal barriers on Death’s Head, Fabian Cortez sneaks in and teleports the X-Men away to an alien planet.

READ: How will the modern X-Men do under new leadership? More than fine, as we list the best of new leader Kitty Pryde!

S.W.O.R.D.’s involvement is only the tip of the iceberg for cameos. The first issue includes members of the New Mutants, and the series also brings in the ’92 version of X-Factor and some of the Shi’ar. The X-Men cast is also expanded from the show, with Psylocke and Bishop now fixtures on the team. It’s amazing to see all of these characters again, but it’s more amazing that it never feels crowded with them all there. Bowers and Sims have crafted a story that actually makes good use of its large cast, making their presence a part of the story rather than a nostalgic cameo.

Bowers and Sims are also able to expand on classic Marvel ideas, folding into the ’92 universe. Nowhere is this more apparent than when the X-Men encounter a group of super-powered Brood. At first, it appears to be a fight for survival, but soon it’s revealed that these Brood are a group of genetic misfits, cast out by their own kind — in essence, the first mutants of the Brood species. The two groups quickly form a bond, working together to battle those that would harm the ‘Ex-Brood’ (and yes, that is what the group calls itself) simply based on their appearance. It’s a great and unique throwback to the mutant-human conflicts of the X-Men, redone in a much broader and all-encompassing way.

The rest of LILAPALOOZA isn’t quite as revolutionary, but it’s no less gripping, as the X-Men return home only to be met by Apocalypse. This time though, the mutant ‘god’ wants their help: something is coming to Earth, something that even he fears. Despite some early fights thanks to Cable trying to kill Apocalypse — and the X-Men in the odd position of protecting their old foe — Professor X convinces everyone to join forces, as he realizes the truth of Apocalypse’s words. Sadly, the collection ends before we get to see the threat engaged, but we still get some final cameos from X-MEN 2099, and some parent-child bonding between Cable, Jean Grey, and Cyclops (Cable looking through photo albums is worth the price of admission).

Overall X-MEN ’92 VOLUME 2: LILAPALOOZA is a great book for any X-Men fan. While fans of the 90’s series are certainly going to be pleased, there’s plenty of references to the history of X-Men and to the rest of the Marvel universe that leave even more to appreciate. Hopefully, this series can continue to be a bright spot for X-fans, in a corner of the Marvel Universe that is going dark far too often.