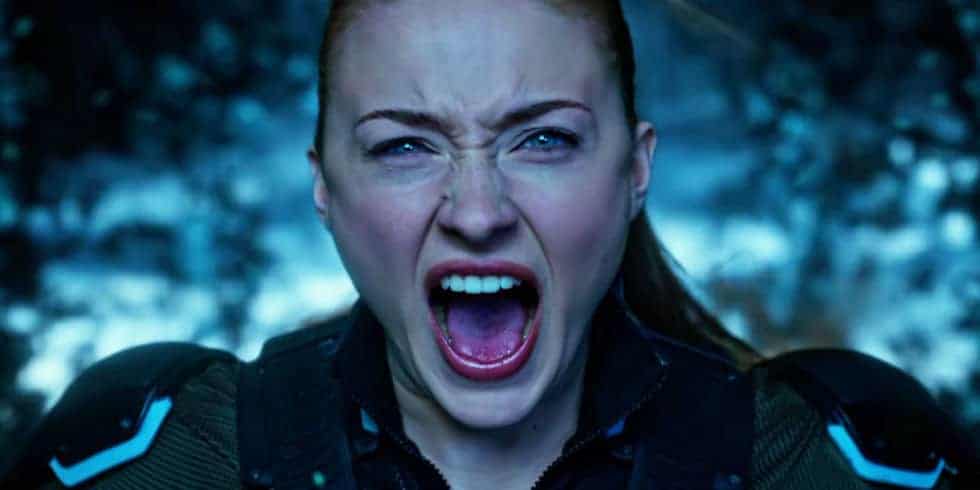 DARK PHOENIX comes to theaters this November. And with its release comes an entirely new take on one of Marvel’s most powerful X-Men: Jean Grey. The Jean Grey in DARK PHOENIX will hopefully be defined, not by the man she is with, but by her own desire and conflict.

Pre-APOCALYPSE Jean Grey is more or less an objectified sidekick. Sure, she has her moments in plot development – specifically in X2 and X3 (more on this later). But as far as character development goes, Jean Grey falls flat. How could the portrayal of Jean Grey in DARK PHOENIX fix this?

Why do we care about Jean Grey? Well for starters, she is one of the most powerful Mutants in all of Marvel. In the comics, Jean Grey is what’s called an “Omega level Mutant,” a title which only ten other Mutants have earned. Not to mention, Jean is the only female Omega Mutant besides Hope Summers. It comes as no surprise that Jean a part of this category, considering how vast her powers reach. Skilled in both telepathy and telekinesis, Jean is able to read/manipulate minds, as well as levitate herself and other objects – AND create protective forcefields.

But let’s put Jean’s abilities aside for a moment because her humanistic traits make her even more lovable to fans. Jean is a Mutant who struggles with a dual personality, often caught between her ‘good’ Jean Grey alias and her ‘Dark’ Phoenix side. This makes Jean important because she struggles with very real issues that go beyond the X-Men. Time and time again, Jean fears she’ll hurt other people due to her unstable mental state. And that directly correlates to an increasingly becoming issue in America, which is to try and erase the stigma around mental illness.

In addition, Jean has terrible nightmares and devastating insecurities which make her grounded despite her position of power. She represents not just females, not just the mentally ill, and not just the insecure. Rather, she represents all of the above. And it’s a shame, then, that her cinematic portrayal fails to do her character justice. Well, up until APOCALYPSE, anyways.

While the love triangle between Jean, Cyclops, and Wolverine isn’t necessarily a bad thing, it doesn’t allow for Jean Grey to grow as a character. A strong, independent Jean Grey is shown at the beginning of the film, giving a speech on Mutants. However, this is maybe one of the only times where we see Jean acting as her own person.

In the first X-MEN installment, Jean hardly makes any important decisions of her own… and her scenes always seem to involve a man. To prove a case in point, we initially learn about Jean’s powers when she uses them to heal and train Wolverine at the X-Mansion.

Then, we see Jean attempt to use Cerebro, only to have Scott rushing towards her to save her. And finally, in the last fight scene, Jean is a damsel in distress with green slime on her face, which Scott blasts away for her.

I’m not saying Jean doesn’t contribute to the team in X-MEN. But she’s certainly not the main event. Jean’s powers don’t stand out in the slightest, and she constantly needs saving. This is frustrating considering she’s an mega level Mutant.

The Jean Grey in DARK PHOENIX will obviously take the main stage in her solo film debut, so we won’t have to worry about her powers being undermined by the others’. Not to mention, we already see Jean single-handedly take the reigns in APOCALYPSE, when she saves Professor X and helps defeat Apocalypse. DARK PHOENIX will definitely portray the character in more of a heroine light than a subordinate one.

In this movie, Jean’s personality seems to take the backseat while her semi-surfacing powers as the Dark Phoenix ride shotgun. She may be more central to the storyline in terms of firepower, but we still don’t get a solid grasp on who she is: i.e., what her demons are, or how they cause her internal struggle. The X-Men are much more dependent on Jean – counting on her to divert a rocket heading for the ship. And yes, Jean makes a major sacrifice at the end to save the X-Men. But all that really tells us is that Jean is strong and selfless.

Consider Wolverine. He’s the main character because he has desires that he actively pursues. Wolverine desires to learn about his past, so Wolverine goes to Stryker’s facilities. Now consider Jean Grey. Can we even pinpoint a single desire of Jean’s that she chases down in X2?

No. She’s only there to lend a helping hand to whatever the current mission is. The Jean Grey in DARK PHOENIX will be much different. Even in APOCALYPSE, we sense a bit of an attitude the first time we meet Jean. Scott knocks the books out of Jean’s hands and then rashly tells her to stay out of his mind.

Even in this small scene, Jean’s deeply embedded insecurities are more palpable than in any of the original movies. It’s safe to assume that DARK PHOENIX will play off of this, continuing to show us what Jean is going through.

X3 gives Jean Grey a bit more dimension, in that we learn what causes Jean internal struggle: her dual personality and misunderstood childhood. But when do we see her actually dealing with the ramifications of those problems?

The most we see her struggle is when she has spurts of recollection, hovering in between being her normal self and being the Dark Phoenix. For example (SPOILERS): she cries over killing Scott at the lake, and she tells Wolverine to kill her at the end.

But since the Dark Phoenix is a villainous figure in the film, Jean Grey’s powers are left uncontrolled. They’re acknowledged in terms of destruction, rather than in terms of Jean’s hardship. And because of this, I think X3 wasted an opportunity to bring more development to Jean Grey’s character.

Jean Grey in DARK PHOENIX will undoubtedly expose her internal battle of having to wield such powers. In fact, in APOCALYPSE, we see Jean can somewhat control when she is and isn’t Dark Phoenix – something we failed to see in the original X-MEN trilogy.

This means that, in her solo film, we’ll really be able to see how she deals with the aftermath of her dual personality flares. Does it cause her to push Scott away? Does she continually feel outcast at school? How will she overcome her powers’ negative consequences? DARK PHOENIX will be more able to answer these character-essential questions than any X-MEN movie we’ve seen thus far.

While all of the movies I discuss above don’t exactly do the character justice, I believe Jean Grey in DARK PHOENIX will be much different solely because of how she’s portrayed in APOCALYPSE.

Jean Grey isn’t much more than a subplot in the film. But in my opinion, she was the strongest subplot to be included. What I loved SO much about Jean is that her insecurities (seen in the comics) are front-and-center. Even in moments that aren’t exactly hers in APOCALYPSE, Jean’s personality is totally encapsulated.

One of the most prominent moments where this happens is after Scott’s brother dies in an explosion. Scott is beside himself, saying that it should’ve been him, not Alex, who died. Jean assures Scott that Alex thought highly of Scott, and thought Scott would make a difference in the world. “How do you know what he felt?” Scott asks. Jean replies solemnly,

“I know what everybody feels.”

Jean’s deep-rooted problems surface even when the scene isn’t hers to own. She absolutely exudes the pain inside of her whenever she finds an outlet. This is nothing like the prior depicted Jean Grey, who seems to show little-to-no emotional implications of her powers.

As far as Fox-distributed films go (or, went?), DARK PHOENIX will be the first female-led movie since 2005’s ELEKTRA. But it’s 2018. Women in Hollywood are a topic more important now than ever. If DARK PHOENIX were to paint Jean Grey in the same, undeveloped light that they did back in the early 2000’s, I think they know the film would flop.

It’s only right that Jean Grey in DARK PHOENIX will continue to be as well-written and as characteristically deep as she was in APOCALYPSE. And if DARK PHOENIX is successful, it’d be one step closer to making more women the lead instead of the sidekick.