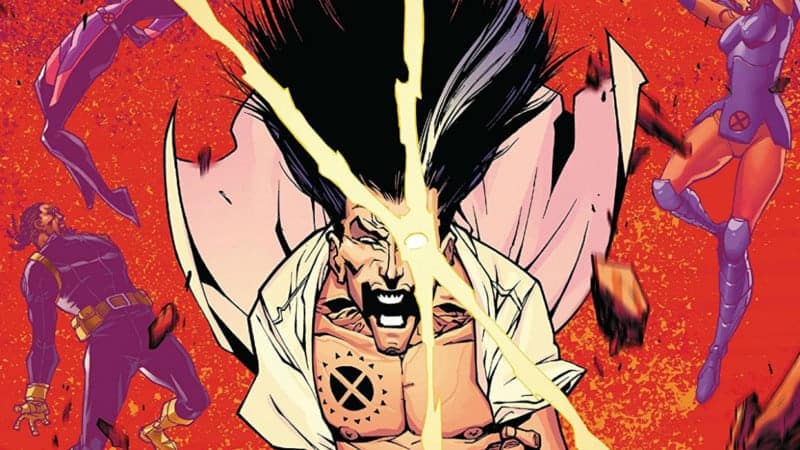 We are nine weeks into the UNCANNY X-MEN weekly series and, in all honesty, I’m starting to get a little tired. Marvel recently announced a slew of new X-Men series coming out in February, most of which hint at X-Man’s eventual takeover of the X-World as we know it. Armed with this information, the ever-increasing threat that X-Man poses in UNCANNY X-MEN isn’t half as exciting. UNCANNY X-MEN #9 displays solid writing from Matthew Rosenberg, Kelly Thompson, and Ed Brisson. Yildiray Cinar’s art is stellar, as usual. The problem isn’t in the issue itself — it’s in what we, as readers, already know. It’s like how you feel after looking up Wikipedia spoilers for that TV show you’re watching. While you still want to see how it all happens, you already know the end result. 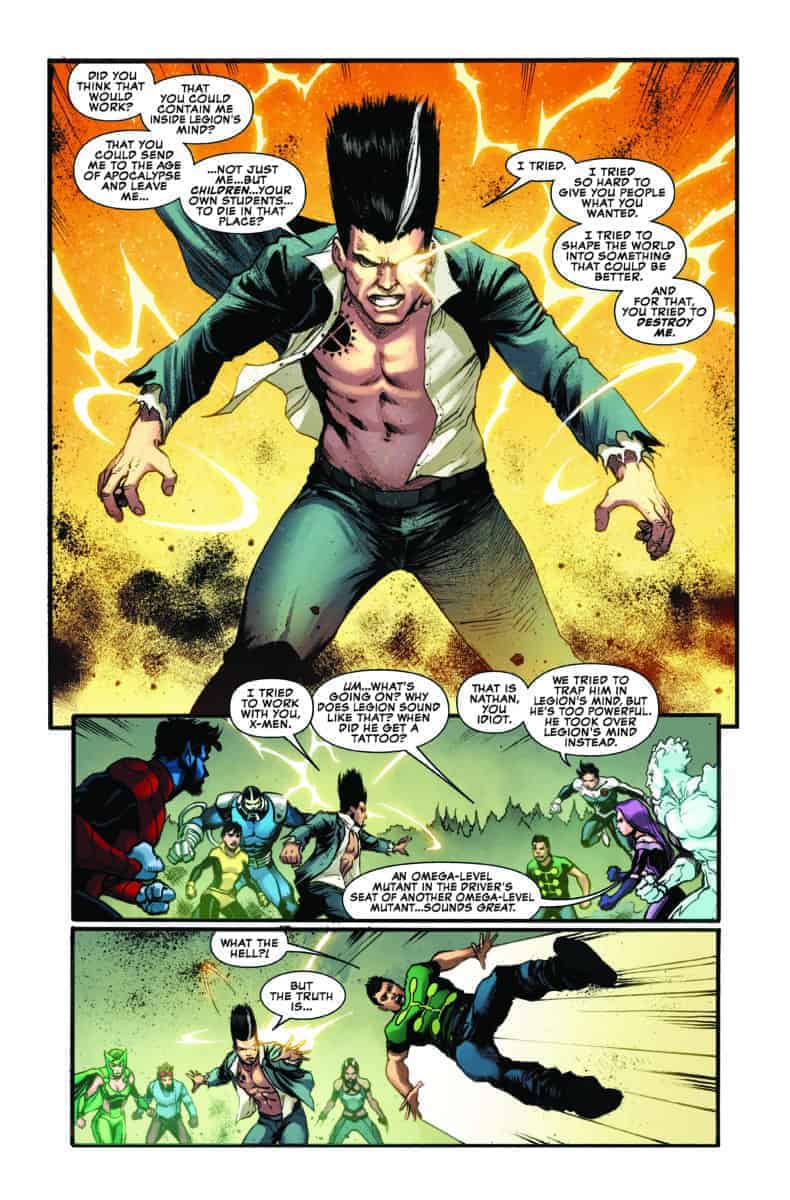 The past three issues of UNCANNY X-MEN have been building up to the climax in the storyline. If I didn’t know what would generally happen, that slow build wouldn’t be so repetitive. Unfortunately, in the case of UNCANNY X-MEN #9, I feel like I’m reading a broken record at times. There are a lot of aspects of UNCANNY X-MEN #9 that I truly enjoyed. It’s hard not to enjoy an issue of this series, what with the diverse cast and amazing art. For me, this issue falls short mostly because of the spoilers.

UNCANNY X-MEN #9 picks up where UNCANNY X-MEN #8 left off. X-Man takes control of Legion’s body, making him considerably more powerful. After realizing that (some) of the X-Men wanted him dead, he’s less willing to “play nice” which is bad news for the X-Men. The battle takes some interesting turns, from Storm becoming one of X-Man’s Horsemen to Prime Jamie’s disappearance. 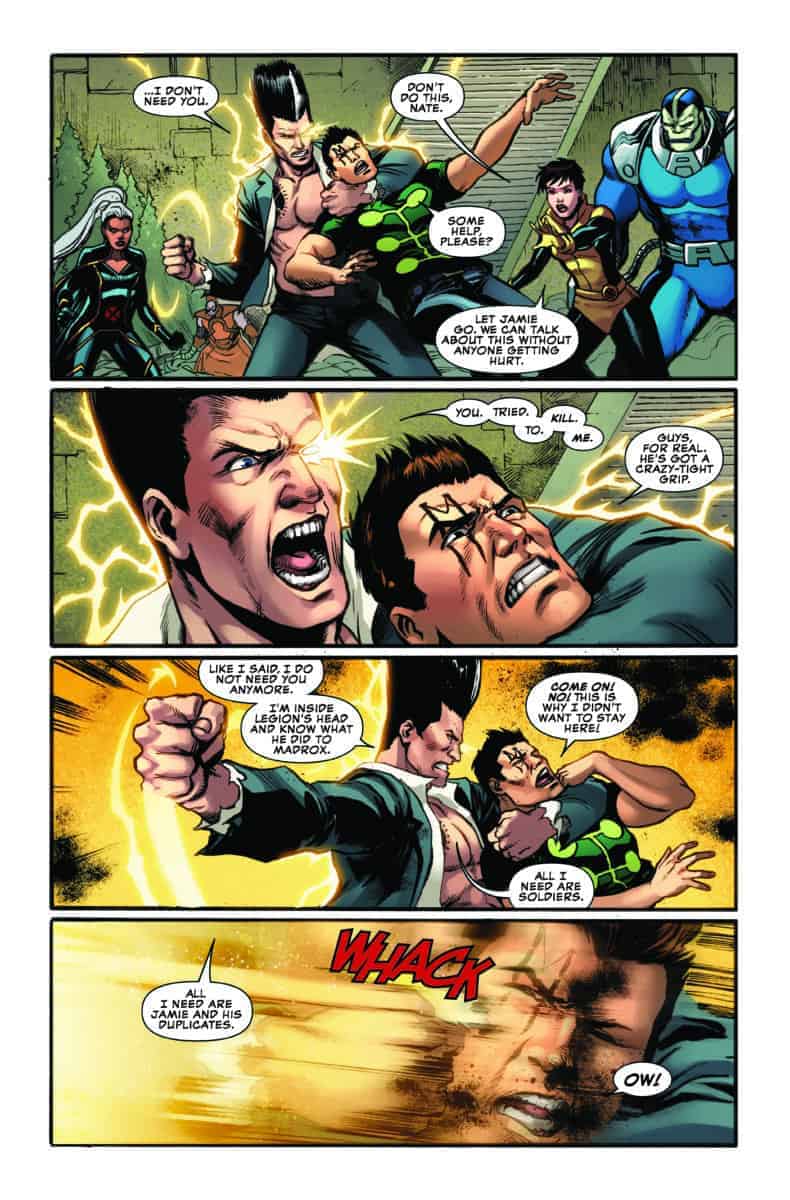 In a way, UNCANNY X-MEN #9 is a bit like a game of tug-a-war in that each side gets a few moments to believe that they’re actually going to win. By the end of the issue, the X-Men are forced to call in reinforcements after X-Man declares himself “The Omega” (as opposed to just one Omega among many). Of course, just from looking at the cover to UNCANNY X-MEN #10, we know those reinforcements prove ineffective in taking down X-Man.

The Consensus on Spoilers

Marvel has to release previews, covers, and series’ titles before the actual issue. Humble reviewers like myself have to know what they’re going to review and fans have to pick out their subscription plans in advance. That’s the way the comic world works. For the record, I’m not trying to dismantle that aspect of comic book publishing. I’m just saying, in the particular instance of UNCANNY X-MEN #9, the various AGE OF X-MAN series reveal too much. I shouldn’t know who’s going to win the battle before the battle is even over, right?

I’m excited for the AGE OF X-MAN series but I wish Marvel had kept them under wraps for just a few more weeks. In that time, the UNCANNY X-MEN series could’ve amped up readers’ anticipation and kept them coming back to their LCBS. Instead, I have the feeling a lot of readers will save their money for AGE OF X-MAN instead. 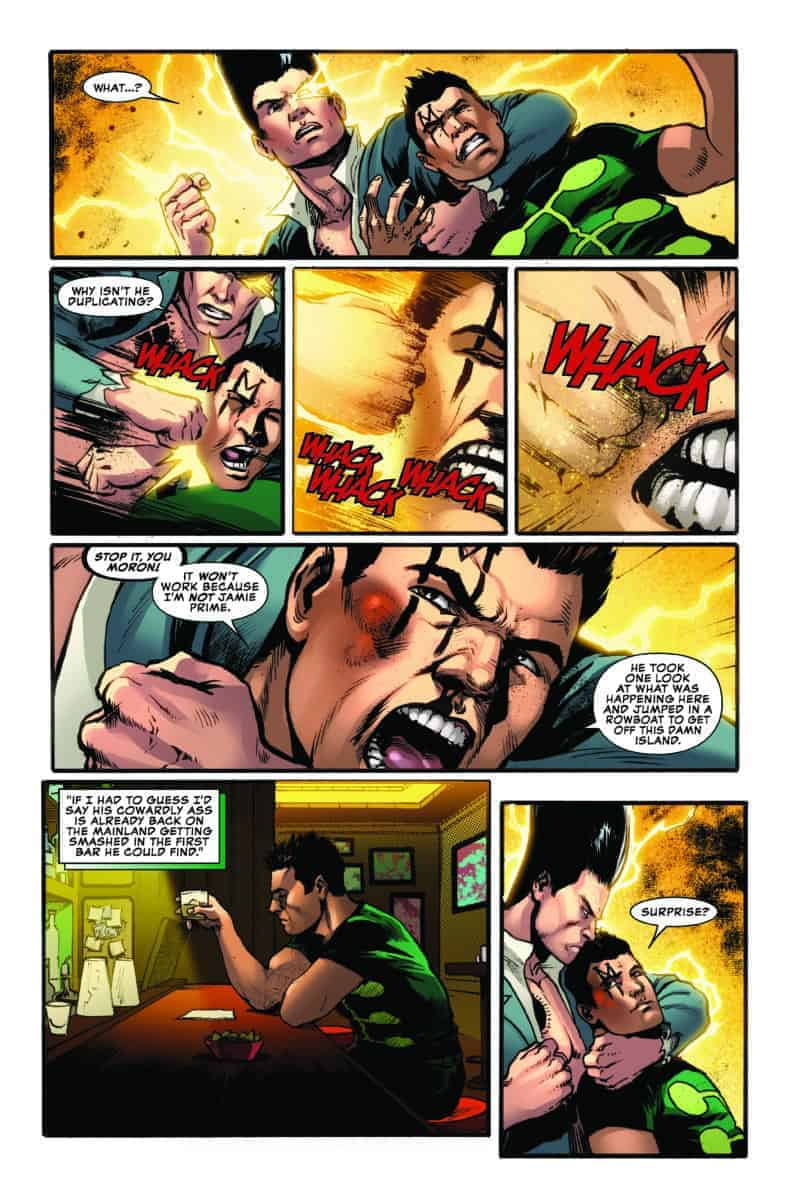 2 Omegas for the Price of One

Having Nate and Legion on the same page equals a lot of power. Having them inhabit the same body equals a tear in the time-space continuum (or something along those lines). I’m not sure whether the fusing of Legion and X-Man was an exceptionally creative or original move, but regardless, it brings about some serious questions. Of course, Omegas are dangerous — everyone knows that. But how dangerous are they? UNCANNY X-MEN #9 has our answer and the people of Earth-616 aren’t going to like it.

X-Men comics frequently ignore the dangers that mutants pose to the world as a whole. As a result, readers tend to forget the magnitude of the word “Omega.” Some mutants, of course, are harmless (insert Dazzler). At the end of the day, prejudice against mutants is wrong — to a point. Mutants like Legion and X-Man, who are mentally unstable, can destroy the world. Shouldn’t the X-Men (or humans, if they can) do something to keep that from happening? 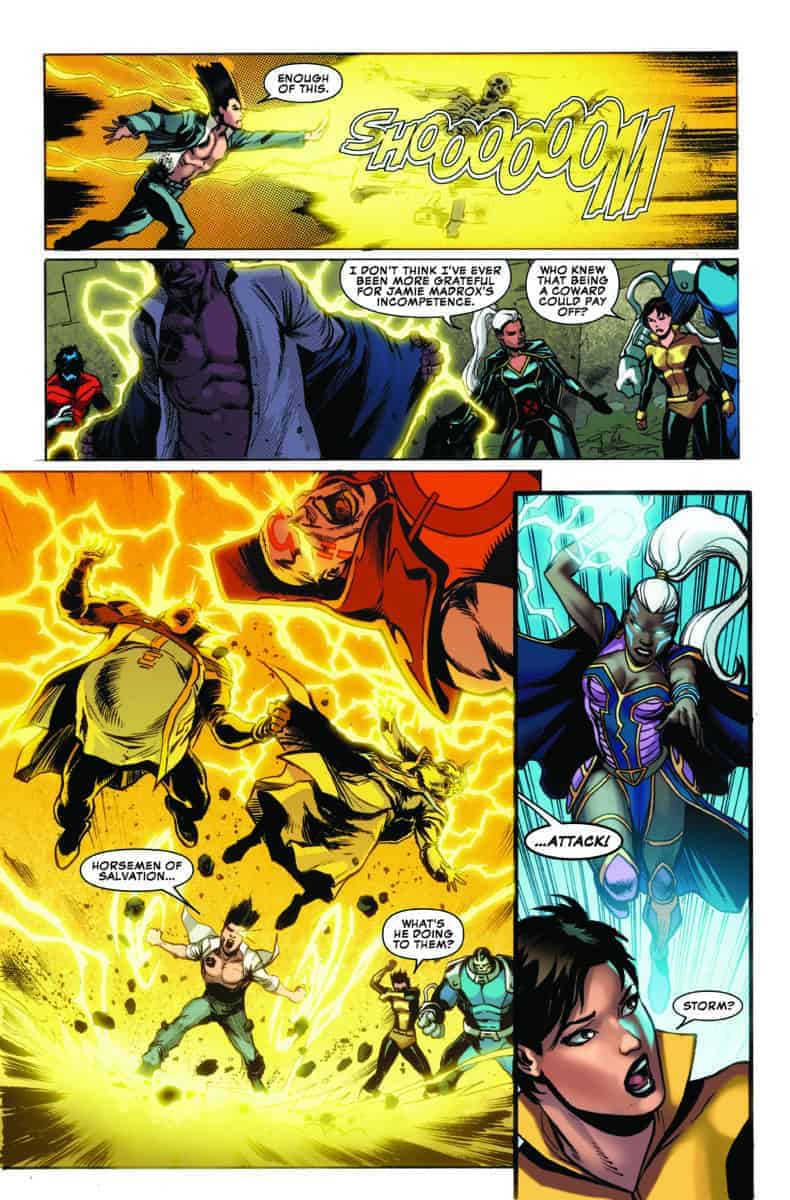 UNCANNY X-MEN #9 is pushing readers to reconsider the parameters of mutant life. Are some mutants (Omegas in particular) too dangerous for their own good?

Regular UNCANNY X-MEN artist Yildiray Cinar is back in this week’s issue and I couldn’t be happier. Most of the artists who’ve worked on UNCANNY have been noteworthy but Cinar brings something special. His realistic style reminds me of classic X-Men comics, which works well considering this series is UNCANNY X-MEN. Because of Cinar, UNCANNY X-MEN #9 already feels like a part of the X-Men canon. 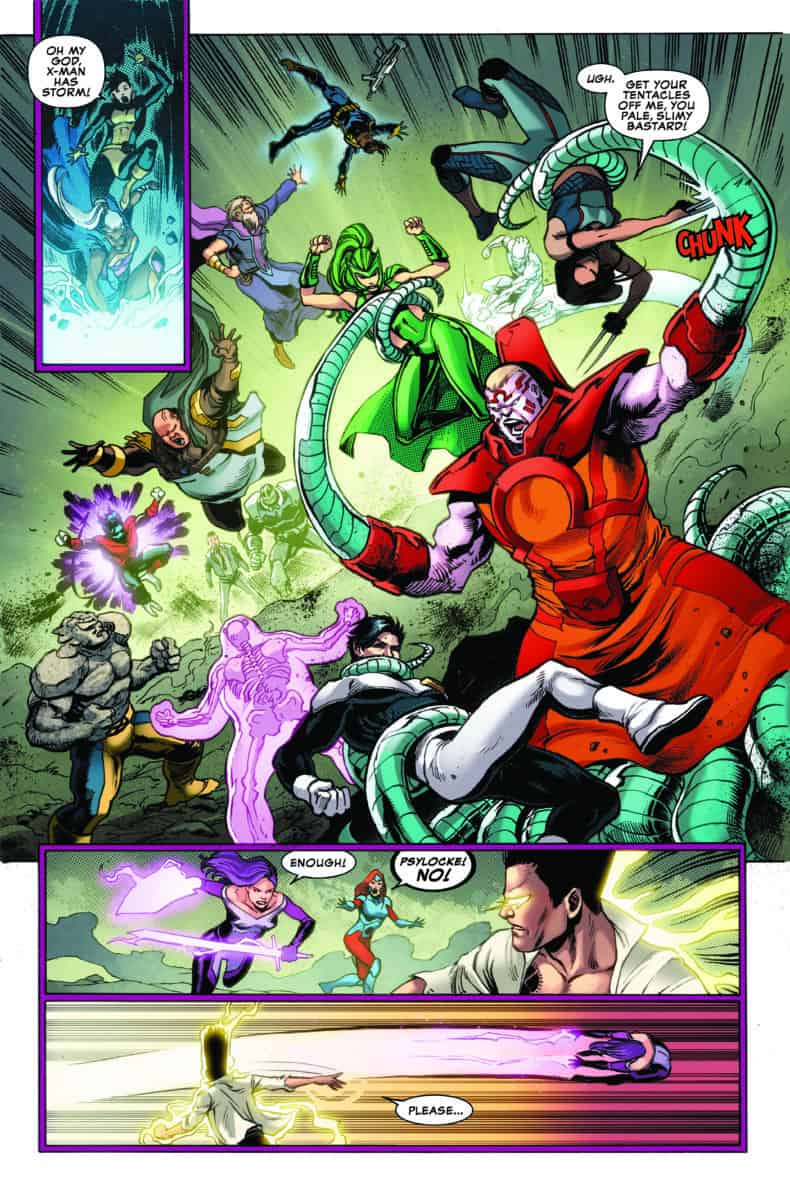 Is UNCANNY X-MEN a bad issue? Of course not. I enjoyed reading it and I assume most X-Men fans will as well. My only wish is that I didn’t know what the end result of this UNCANNY X-MEN arc would be. Because the mystery is gone, I can’t enjoy it quite as thoroughly. Let me know if you have similar (or opposing) thoughts in the comments!