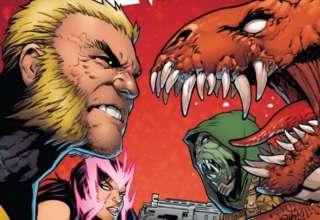 In a final entry before the beginning of the APOCALYPSE WARS event, Cullen Bunn and Greg Land conclude their arc about the Dark Riders—and also shed new light on the character dynamics between the X-Men. With Monet, Psylocke, and Sabretooth trapped in Egypt and the Dark Riders coming for one of the last mutant healers left, Magneto will have to defend Triage on his own inside the ruins of his former mutant empire.

Characterization-wise, UNCANNY X-MEN #5 might actually be the title’s best entry to date. We get a great impression as to how experienced Bunn is with the character of Magneto. His solo title on the Master of Magnetism was, by all means, a fan-favorite, and the strengths of that title can definitely be found in this issue, as well. The Magneto we encounter is brutally calculating. He claims to be a leader, but he ultimately sees the other mutants not as teammates but as a means to achieve his plans. The idea that there are no moral barriers Magnus wouldn’t cross in order to do what he thinks is right for mutantkind is what makes every new Cullen Bunn issue fascinating.

Overall, the writer manages to flesh out the character dynamics within the team a lot more than in the previous issues, while also establishing for the first time in what way the UNCANNY X-MEN and EXTRAORDINARY X-MEN interrelate as Monet and Psylocke transmit a new refugee to X-Haven. The mistrust between people that should cooperate is what makes books like UNCANNY X-MEN special, and Bunn should try not to disregard this important aspect in the future.

CLICK: Wanna find out more about Lemire’s EXTRAORDINARY X-MEN? Here’s our review of #8!

As the issue’s plot goes, after a quick showdown with the arc’s main antagonists, a lot of what happens seems weirdly unrelated and anticlimactic. It almost feels like Bunn is dealing with the Dark Riders as quickly as possible so that he has pages left for everything else. The latter half just feels like it doesn’t quite fit into the rest of the arc and, again, like an anticlimactic way to wrap things up.

Marvel fans will be glad to hear that UNCANNY X-MEN #5 is, for the time being, the last issue penciled by Greg Land before Ken Lashley takes over for the APOCALYPSE WARS event. And if you’re not a big fan of Greg Land, which is pretty likely given the fanbase’s general disfavor of the 53-year-old artist, you will undoubtedly find many things to criticize about his work in this issue, as well. He’s often been criticized for tracing and recycling facial expressions, which continue to be problems in this issue. Still, UNCANNY X-MEN #5 is far from being poorly drawn, not least because of the very dynamic staging of Magnetos fight on Genosha and some great colors by Noland Woodard.

The story arc being concluded here, spotlighting the conflict between the X-Men and the Dark Riders, had its highs and lows, and it didn’t succeed in giving me a clear impression as to why each character is on the team, what their motivations are, and what to expect from them. While it might have seemed shallow at some points, the characterization of Magneto and Psylocke was a true highlight, and there were some surprisingly emotional scenes, as well. The choice of the Dark Riders as the first antagonists for this title was probably a good decision, in terms of storytelling, because even though they might not be as three-dimensional as other villains, they showcased both the danger mutantkind is facing from all sides and the complexity of the mutants-inhumans conflict—and what Magneto is willing to do to protect his kind.

Although UNCANNY X-MEN #5 feels weirdly anticlimactic towards the end and Land’s art comes with its usual flaws, the spot-on and gripping characterization of Magneto and the looming conflicts between the protagonists make the issue worth picking up.