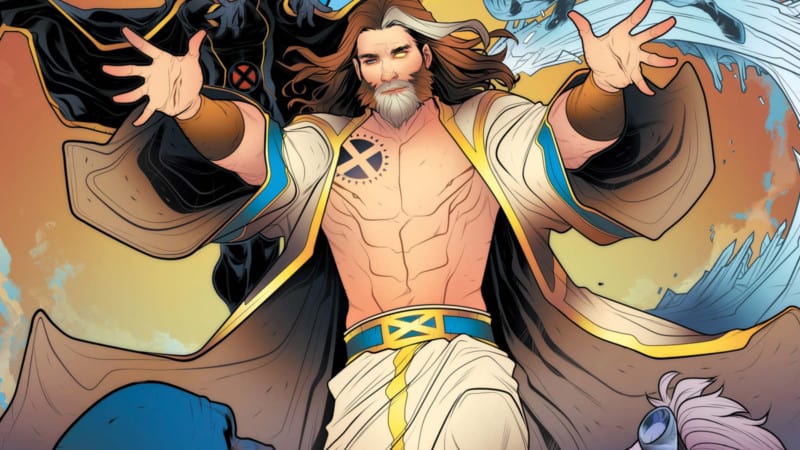 There’s no other way to say it: Nate Grey is kind of a lame character. He came about during a strange time in X-Men history when silly appearances and mysterious, overpowered abilities were popular. After the 1990s, Nate Grey pretty much disappeared…until this week’s UNCANNY X-MEN #4. Writers Matthew Rosenberg, Kelly Thompson, and Ed Brisson are bringing Nate Grey back into the spotlight in a very big way. Instead of a Cable-look-a-like in a leather jacket, UNCANNY X-MEN #4 introduces a version of Nate that is more god than man.

Penciller Pere Perez and colorist Rachelle Rosenberg bring the character to life and deliver what has to be the best art in the series so far (and I know I’ve said that before). This issue isn’t for everyone, but if you’re a true X-Men fan (and not scared of getting a little corny) UNCANNY X-MEN #4 is another solid issue in a great series. 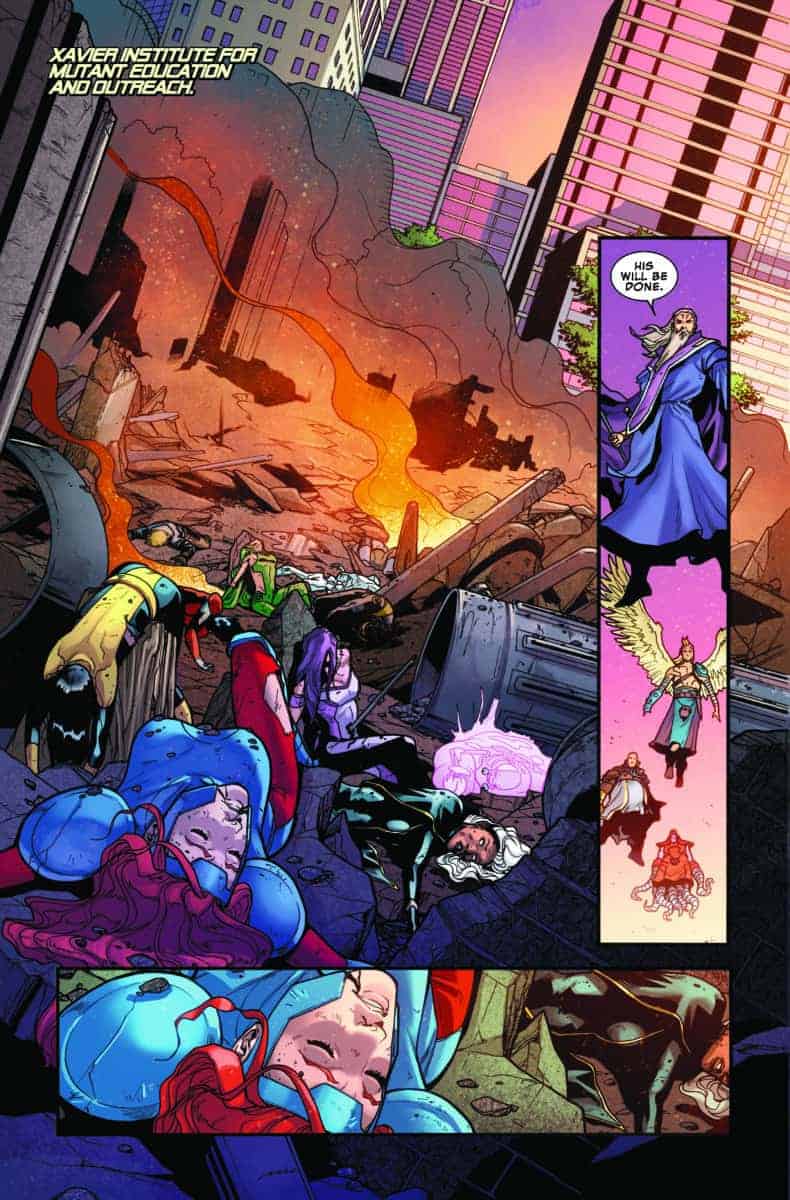 UNCANNY X-MEN #4 introduces readers to the mysterious figure who kidnapped Kitty, started all of the unnatural disasters, and created the Horsemen of Salvation: Nate Grey. We see a lot of Nate in this issue, which is good since the writers are really making him out to be a complicated character. In an effort to start his plans of “peaceful” world domination, Nate telepathically contacts every mind in the world, explaining his plans to bring about an “apocalypse” of sorts (but, apparently, not an evil one). At the X-Mansion, Jean plays damage control, sending teams out to take on the various Horseman members. As a side plot, the “X-Kids” (who really aren’t kids anymore) argue with Jean about her decision-making. 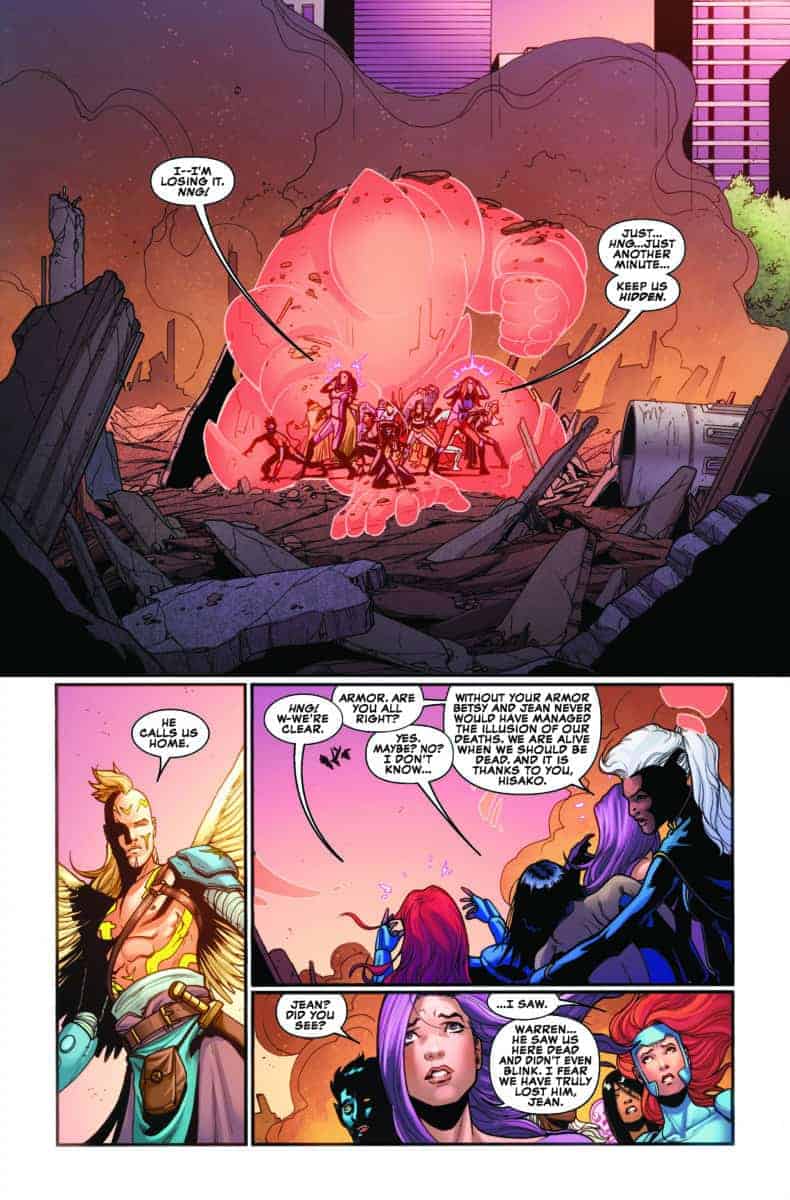 From a Punchline to a God

Does anyone really like Nate Grey? I’m sure there are a few fans of the character, and I’m sure they have their reasons for liking him, but overarchingly it seems like most X-Men readers don’t care for the character. Nate is always on the lists of “worst X-Men characters” or “lamest X-Men members.” His series, “X-MAN,” rarely did well and frequently got bad reviews. If it weren’t for the appearances of other characters (particularly Madelyne Pryor), I doubt anyone would have read it.

With a character like Nate, it’d be easy to just throw him out for good. And yet, Rosenberg, Thompson, and Brisson make him the star “villain” of UNCANNY X-MEN. I’ll never understand their reasoning but, I have to admit, it works. Nate’s characterization in this issue is perfect. The whole Jesus get up, with the long hair and the robes, is both hilarious and frightening.

Similarly, his overdramatic dialogue is both laughable and incredibly scary. He’s still the same lame character he’s always been, but this time the lameness makes sense. Like a crazed cult leader with just a little too much power, this creepy version of Nate inspires laughs and chills, sometimes simultaneously. 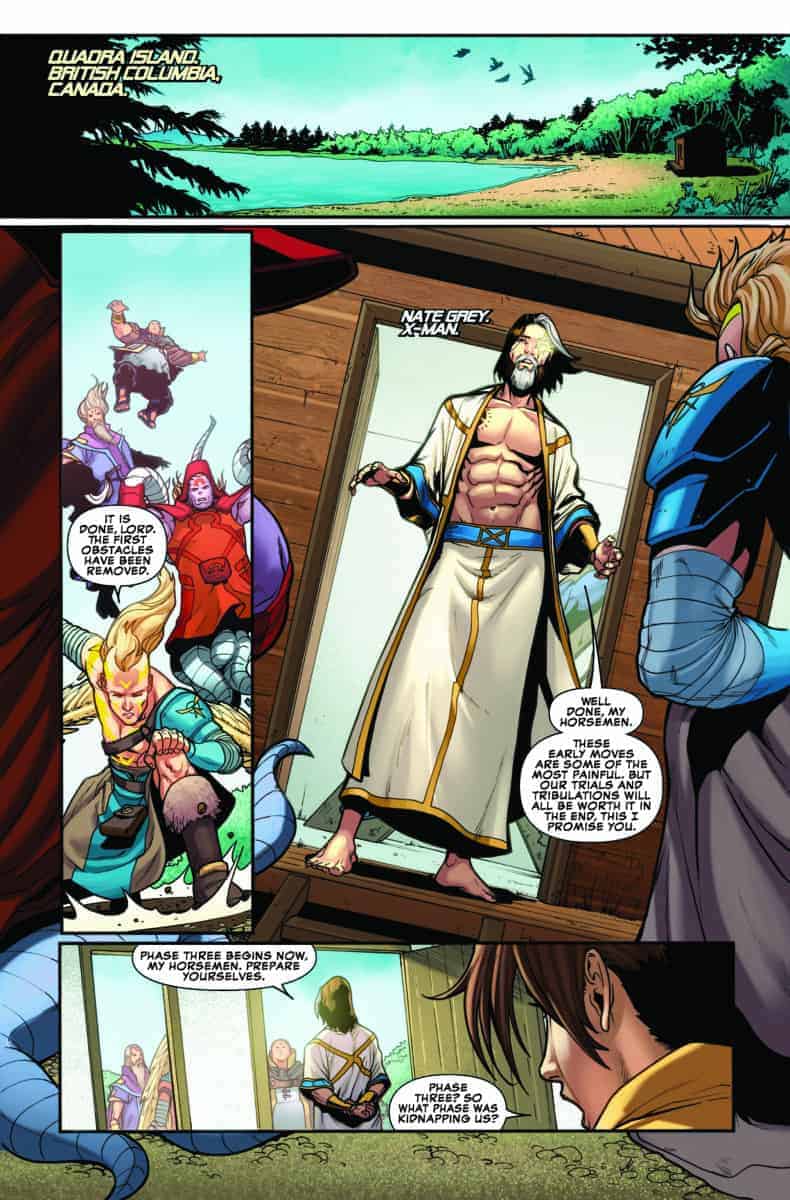 One of the strongest aspects of UNCANNY X-MEN is the size of its character roster. Rosenberg, Thompson, and Brisson juggle over a dozen characters in one series. So far, they’ve done a great job giving every character at least some panel-time, and this issue is no exception. If anything, UNCANNY X-MEN #4 shows that the writers have truly mastered their signature balancing act.

In this issue, Jean upsets Armor and the other younger X-Men. According to them, Jean is making decisions without listening to other X-Men. Armor says Legion could be a useful resource against Nate, but Jean pretty much ignores her, saying Legion is too dangerous to trust. Personally, I’m on Jean’s side. Legion is beyond creepy and I’d really rather he just disappear from UNCANNY X-MEN (we can hope, right?). Still, I live for X-Men family drama, and recent X-Men comics just haven’t been giving enough of it. Jean is a bossy lady and to see someone much younger, like Armor, call her out on it is great. I’m not sure where this side-plot will lead, but I’m definitely excited to see. 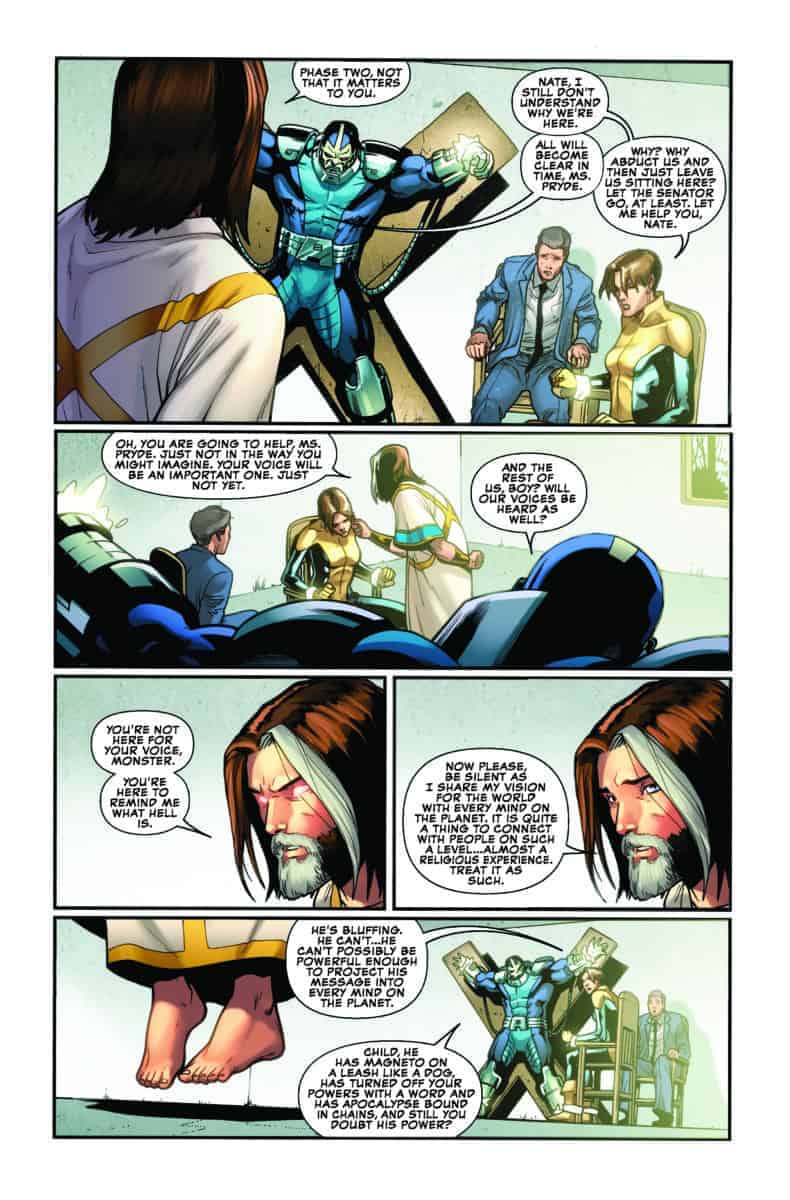 With every issue of UNCANNY X-MEN, the art has steadily improved, which is something I’m not used to seeing in an X-Men title. Recent X-Men titles, like X-MEN GOLD and X-MEN BLUE, have really struggled to deliver successful art. Thankfully, UNCANNY X-MEN has completely avoided the issue, giving readers some of the best artwork I’ve seen in comics in a while. The artwork of Pere Perez in UNCANNY X-MEN #4 has to be the culmination of this upward trend. Every single page in this issue is amazingly well done, with perfect proportions of the figures and compelling layouts. His style is simple and stylized but somehow still very realistic. Although I normally like to point out a few awkward facial expressions, with Perez, I can’t since there are none.

As with the past issues, colorist Rachelle Rosenberg does an excellent job creating a unique palette for the issue. I thought her most successful panels were the ones that took place on the oil rig. The heavily saturated reds, oranges, and yellows are a nice break from the typical blues most colorists use in ocean scenes. 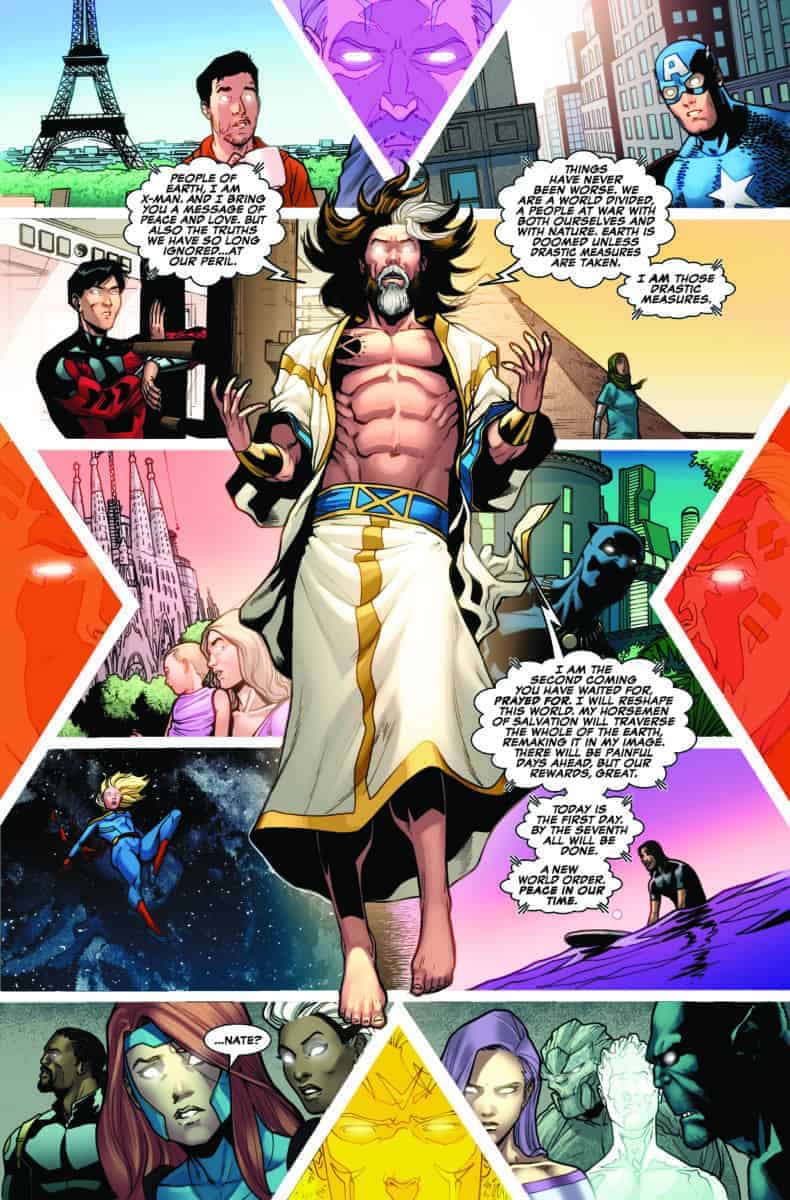 UNCANNY X-MEN might just be the best Marvel series out at the moment. At the very least, it’s undoubtedly the best X title. With each issue, Rosenberg, Thompson, and Brisson keep giving readers new things to mull over, which, for me, is what a good weekly comic does. The X-Men have been sort of stuck for a while, but I think they’re finally getting out of it. Maybe 2019 will be the X-year we’ve all been waiting for.