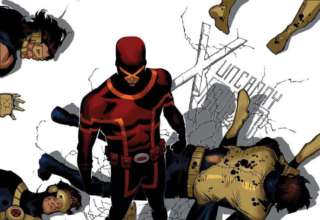 It’s the end of the mutant revolution and the New Xavier School.  With this issue focused on Cyclops coming to terms with his past mistakes and reunited with his brother, does Bendis deliver an issue with great characterisation and character interaction?  Is this goodbye to the Uncanny team believable?

First off, the issue is very Cyclops-centered. Which is good. Basically, we have a dialogue between him and Alex about why he told his students to visit the Jean Grey School from now on, what his mutant revolution was all about and what he wants to do next. As I already mentioned, we have Cyclops dealing with the mistakes he made in the past, especially murdering Charles Xavier and starting off his mutant revolution. We have a really beautiful metaphor for this right on the cover, where we see Scott standing next to multiple versions of himself from various eras (Original 5, X-Factor, 90’s, Age of Apocalypse, New X-Men), lying on the ground, defeated. That really points out that aspect of him having made mistakes in the past and having to decide what to do next.

The character interaction is something I really enjoyed reading this book. Scott and his brother always had a complicated relationship and it’s very interesting to see them together again after more than 2 years of comics in which they stood on totally different sides. Even though Alex seems kind of off-character from time to time, I guess that’s how he acts when he’s inverted and trying to hide the fact that he’s secretly still evil. Really looking forward to seeing what’s coming next. 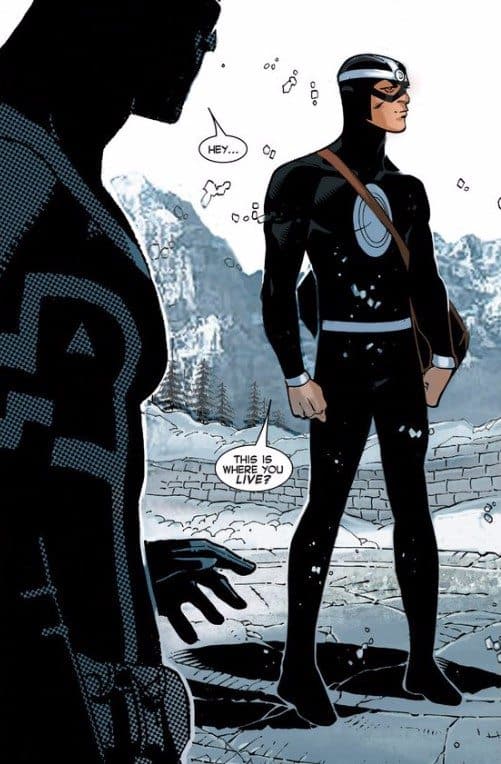 As for Scott’s interaction with the students, it’s heartbreaking to see how disappointed they all are. He promised to teach and protect them and make a mutant revolution with them, but in the end, it turned out that all these promises were pointless and just caused by his mental breakdown. But most of his students had to give up many things to visit Scott’s school: they had to leave their old lives behind, their family and friends, their home.

But what’s most heartbreaking and well-written is the dialogue between Emma and Cyclops. I don’t want to give too much of that one away, you should seriously read that yourself. But we get to know a lot about their feelings for each other, and even see Emma’s hard shell crumble in this extremely emotional scene.

Ultimately, it kind of feels like this issue is what all of Bendis’ books since ‘All-New X-Men #1‘ and ‘Uncanny X-Men #1′ have led to. We get to know Cyclops’ motives behind the revolution, he realizes that he feels extremely guilty for Charles’ death, and he says goodbye to everything he established in the last 31 issues. Reading this feels like saying goodbye to an old friend, and it feels like a series finale, even though we know there are still 4 issues to come (and I’m really looking forward to reading #600). The last words about Cyclops’ students, his revolution and all these things have certainly not been spoken, yet. Still, Bendis’ manages to deliver an issue that’s not only moving and entertaining and that finishes many plot lines that began back in ‘Uncanny X-Men #1′, but that’s also one of the best issues in his run to date.

When it comes to the art, I’m sure anyone who likes Bachalo’s art on UXM won’t be disappointed. I really enjoyed this issue’s art, even though many people complain about Bachalo’s recent work.