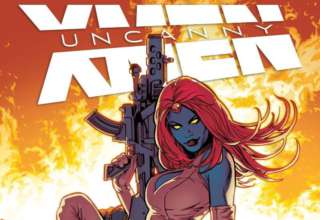 After introducing us to their X-Force-esque team of Uncanny X-Men in issue #1, Cullen Bunn and Greg Land kick this issue off by introducing us to yet another member of the team: Mystique, who has apparently been investigating Someday Enterprises on her own for a while. As Magneto and Psylocke pursue the Dark Riders for murdering a mutant with a healing ability, they send Monet and Sabretooth on a mission to protect an old mutant ally.

While the first issue suffered heavily on the artistic side, this one gets some bonus points for well-executed, dramatic, and emotional scenes at the end of the issue. In #1, it felt almost impossible to relate to any of the characters due to Land’s awfully traced faces, whereas it almost feels like there’s more artistic originality to this issue. Overall, the art seems surprisingly acceptable. In addition to that, the issue is not as universally grim and sinister, visually, as was the first.

READ: In case you missed it: here’s our review of UNCANNY X-MEN #1!

Another thing that sets this issue apart from its predecessor is that instead of giving equal focus to each of the team’s characters, it’s fairly concentrated around what I think are the two least interesting characters: Monet and Sabretooth. Bunn still manages to make it interesting and emotional, with well-written dialogue that fleshes out what these characters are about and helps us get to know them better. The surprisingly high amount of drama for a second issue made me stick to each page, as well. Taking more than half of the issue to tell us about how Monet and Sabretooth encounter Elixir helped build tension, and it left me rooting for the characters.

When it comes to the book’s plot, it appears that Bunn is already laying the foundation for the “Apocalypse Wars” story line, while, along the way, introducing this team’s characters. Let’s just hope he doesn’t repeat the mistakes of X-Men colleagues Jeff Lemire and Dennis Hopeless, who were both criticized for taking too much time to “bring the band together.” The connection between Magneto’s team and Mystique and the Hellfire Club is not quite clear. Fantomex, who was also confirmed for the title, hasn’t appeared yet at all.

What seems to be missing as well is the disastrous team dynamic Bunn has been promising us in many interviews: his characters are supposed to half-kill each other and not work together as a team. At this point, everything just seems too harmonic. All we can do is wait and see whether future issues will give us more of that, once push comes to shove and the whole team is united.

UNCANNY X-MEN #2 is surprisingly satisfying and undoubtedly better than the run’s first issue. It manages to get me emotionally affected and is a dramatic, interesting new entry to this story about antiheroes with almost acceptable art by Greg Land.

MORE articles about the X-Men here!