I’ll be the first to admit it: I lost hope in Matthew Rosenberg. UNCANNY X-MEN #14 was one of the weakest X-Men comics I’ve read in a long time. It effectively zapped any and all excitement I had for the series. The two issues before it (#13 & #12) also struggled to keep up with the parallel AGE OF X-MAN series, which, though controversial, do deliver a lot of entertaining storylines. When I saw UNCANNY X-MEN #15 on the docket, I wasn’t thrilled about reading it.

About three pages in, I couldn’t put it down. After the final page, I had to take a moment to let it all soak in. I was well and truly surprised. UNCANNY X-MEN #15 managed to completely turn around a series that was undoubtedly sinking. Rosenberg performed a resurrection ritual unlike anything I’ve ever seen and somehow, miraculously, it paid off. UNCANNY X-MEN #15 is a great issue. 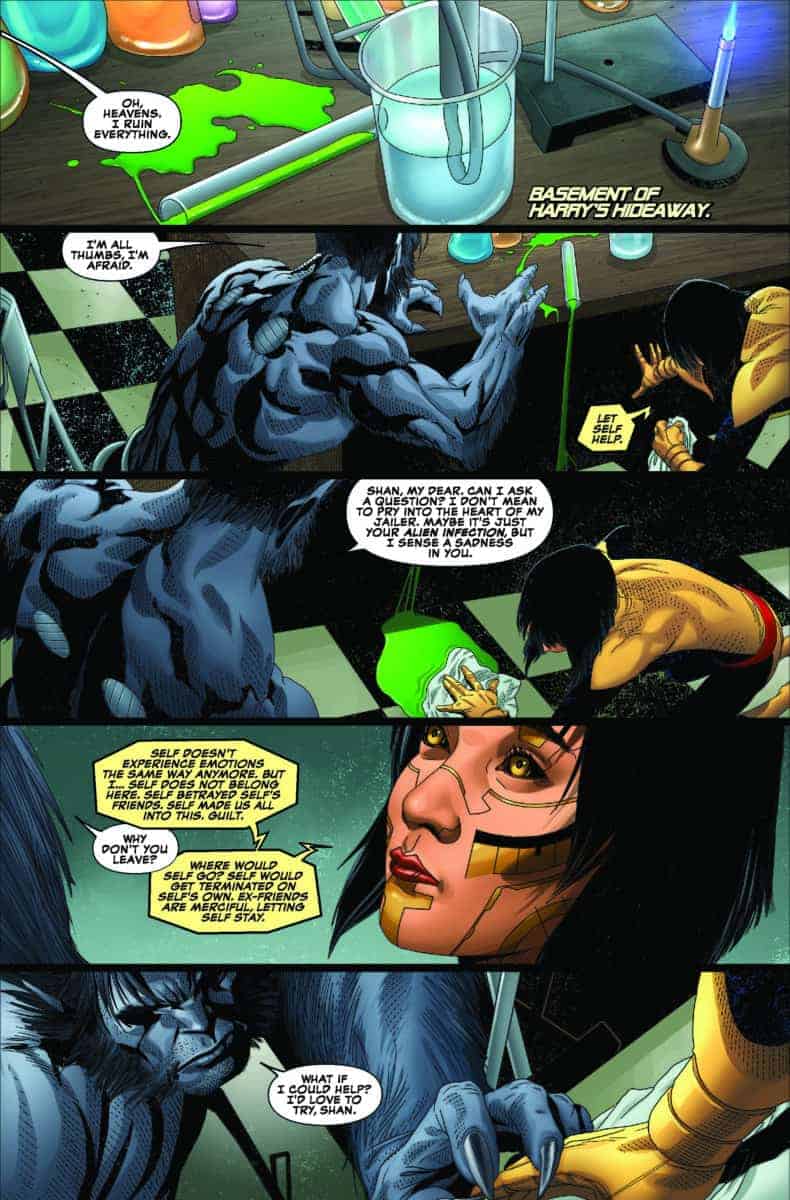 The only slight drawback is the art. Artists Salvador Larroca and Guru-eFX improve from UNCANNY X-MEN #14, but they don’t bring the level of art that Rosenberg’s writing demands. Still, compared to the previous issues, Larroca’s style in UNCANNY X-MEN #15 shows a remarkable increase in attention to detail and realism.

Rosenberg kept a strange pace in the past few issues of UNCANNY that oscillated between too fast and too slow. In UNCANNY X-MEN #15, he finally hits the perfect plot speed. A lot happens without forcing readers into a content overdose. Really, only two major events occur in the issue: Cyclops’ team confronts the MLF and Dark Beast “cures” Shan and Dani of their transmode parasite.

It doesn’t sound like a lot, but these two events are huge for the rag-tag bunch of mutants. The fight with Hope leads to Cyclops losing an eye (and Hope getting six claws to the stomach). Dark Beast’s experimentation leads to Jamie (or a dupe) having to take the full brunt of the transmode parasite, in place of Shan and Dani. 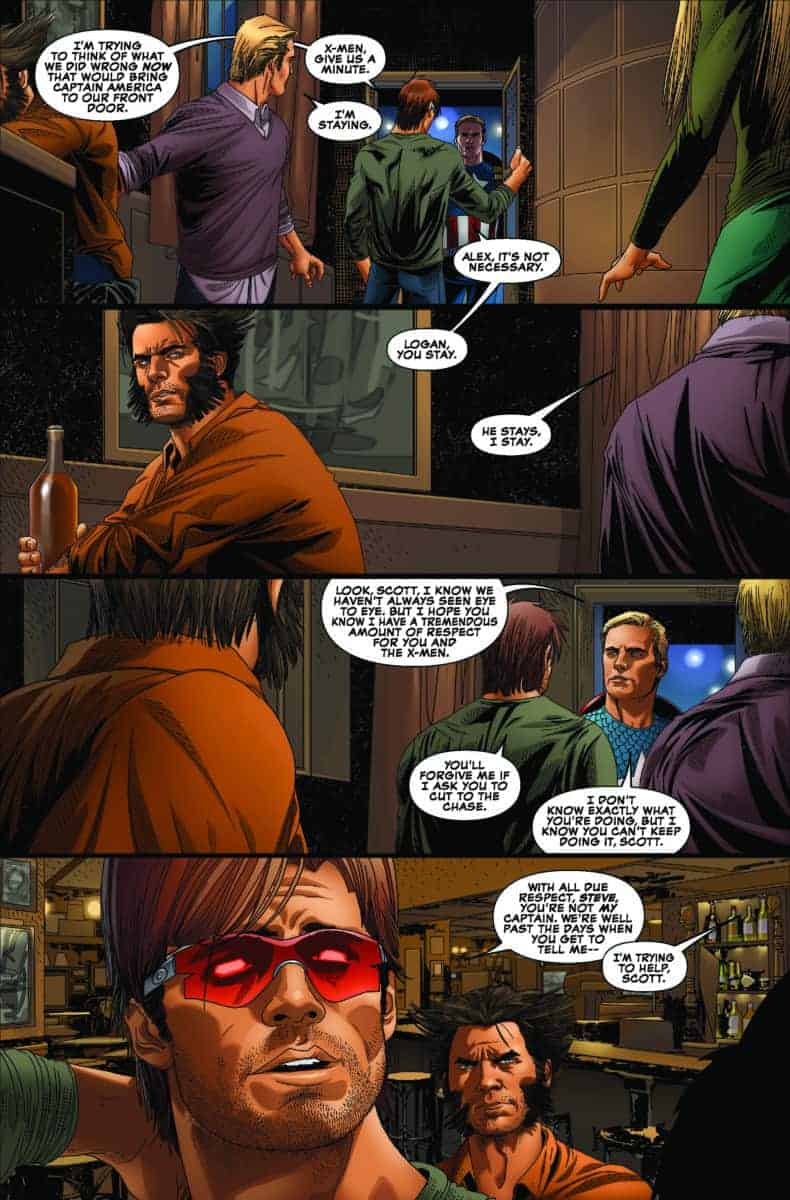 By this point, everyone’s probably pretty familiar with the Age of X-Man. Whether you love it or you hate it, the alternate reality isn’t going anywhere for at least a few more months. This means that if you’re not the biggest fan of Nate Grey’s anti-love paradise, UNCANNY X-MEN is the only way to get your X-Fix. That, naturally, comes with some serious drawbacks.

Besides not being a great series overall, UNCANNY has a somewhat small cast of characters. Even smaller is the pool of characters who Rosenberg actually gives panel-time. As hard as it is for some people to believe, there are X-Men fans out there who don’t really care for Wolverine and Cyclops. That’s why this series needed Hope.

I don’t love the Mutant Messiah, but she is a strong female character — which is sort of what this series needs. Scott, Logan, Dark Beast, and Alex dominate the storyline, leaving characters like Magik, Wolfsbane, and Dani to live in the background of every other page. The X-Men have so many intriguing female characters that not using them in a series like UNCANNY creates a noticeable gap. Hope fills that gap and appeases fans who may not be big on reading a Cyclops solo series. 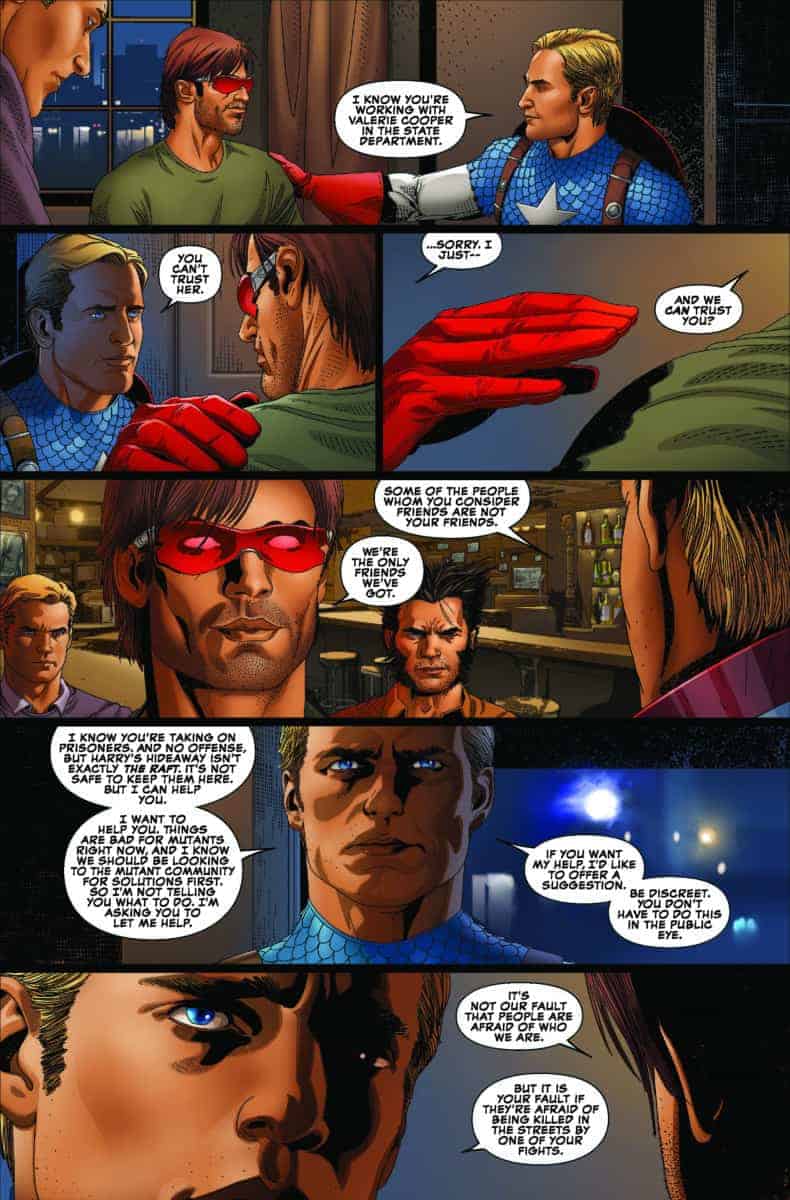 Comics are supposed to be “action-packed.” These characters are superheroes after all. You can’t save the world by just sitting in Avengers Tower all day.

Action belongs in comics but sometimes, writers let action guide the storyline instead of the other way around. UNCANNY X-MEN #14 featured a strange battle sequence near the end of the issue that, in terms of plot, didn’t need to happen. That sort of senseless action cheapens the comic and detracts from the main storyline. In short, it should never happen.

Thankfully, in UNCANNY X-MEN #15, it doesn’t. The Cyclops and Hope faceoff balances action and characterization. Rosenberg develops Scott’s position as a trying (and failing) team leader while simultaneously fleshing out Hope’s character after being away from comics for a few months. The loss of Cyclops’ eye and Wolverine’s subsequent attack are so poignant and powerful because Rosenberg wraps the intense violence in characterization. The story develops within the action scene instead of before or after it. 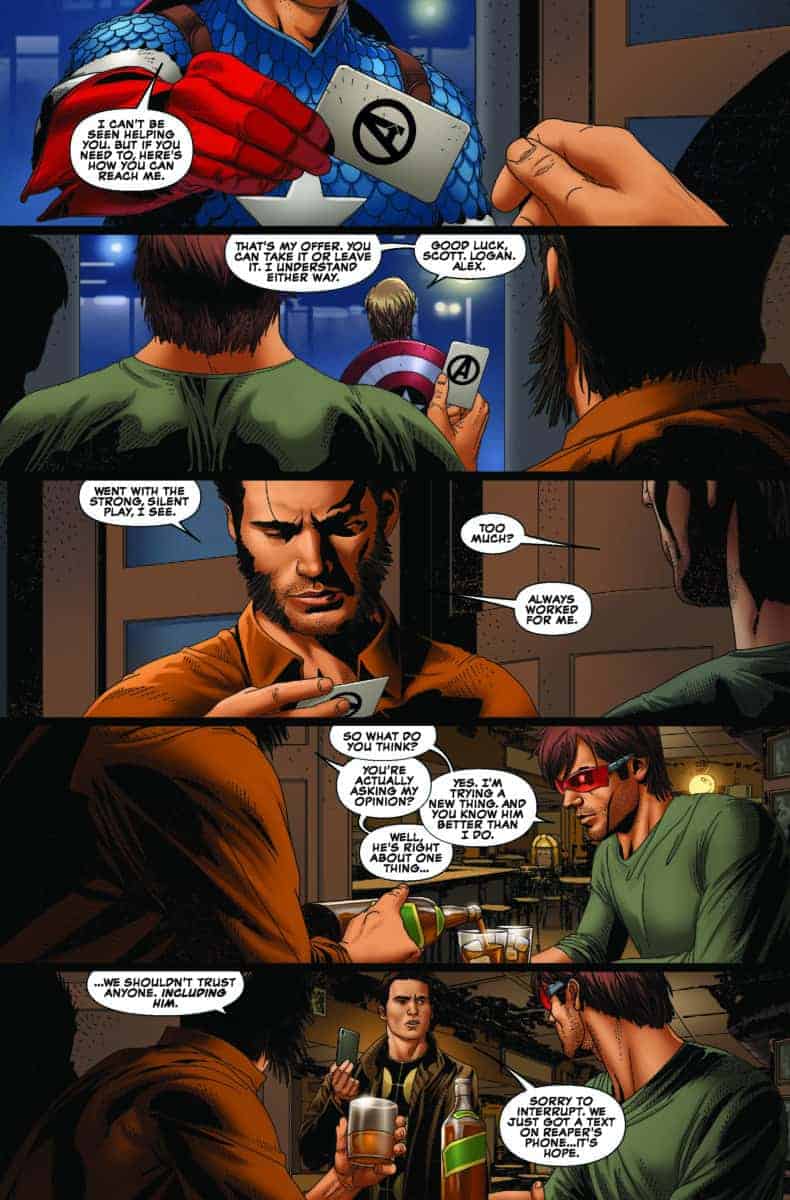 Unfortunately, there isn’t much to say about Salvador Larroca and Guru-eFX. Compared to UNCANNY X-MEN #14, Larroca has improved slightly. More and more of his figures and facial expressions appear natural. This is a big step-up from the plastic-like people seen in UNCANNY X-MEN #12. Hope, in particular, looks realistic without teetering on that “uncanny valley” that Larroca’s version of Cyclops frequently falls into.

I’m happy to see Guru-eFX’s palette becoming more vibrant, though I’m not so sure the outdoor fight scene needed to be quite so vibrant. Still, it’s an improvement from the past issues where everything’s strangely monochromatic. 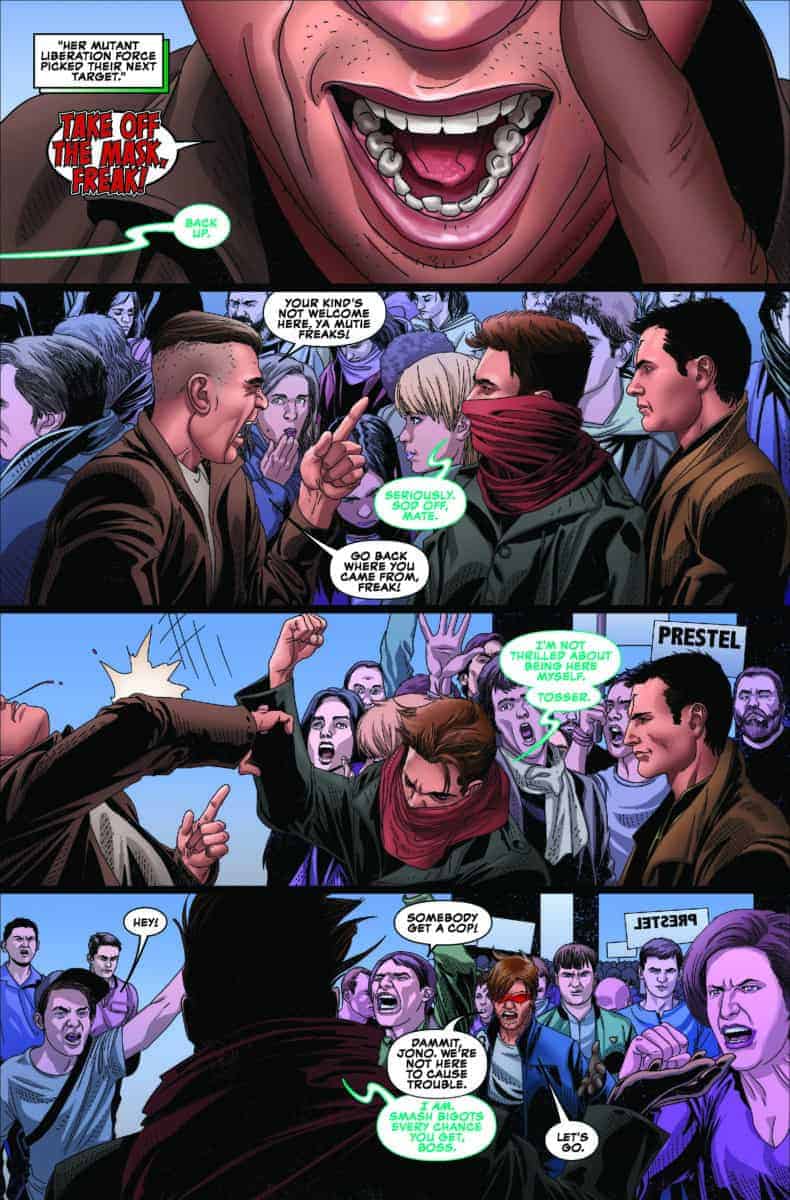 UNCANNY X-MEN needed this issue. While UNCANNY X-MEN #15 isn’t a perfect issue, it’s almost good enough to prove that Rosenberg can save the rest of this storyline. If he keeps up the momentum he’s got going, this series could become something semi-memorable.

My only concern is whether or not he can keep that momentum. There have been other issues of his UNCANNY run that made me think he was headed in the right direction. Regrettably, I was always wrong. I don’t want to dive in too quickly and say that Rosenberg can do no wrong after UNCANNY X-MEN #15 because that would be wishful thinking. This was an entertaining issue that I’d recommend to any and every X-Men fan. UNCANNY X-MEN #16 might be just as good or it might be another disappointment. At this point, UNCANNY might just be destined to become a hit-or-miss series.