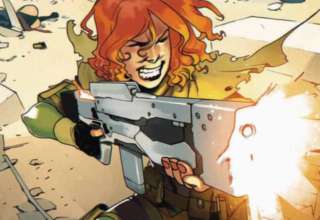 With the vast majority of the world’s mutants living within the “Age of X-Man” reality, Cyclops and Wolverine are left on 616 to pick up whatever remains. Luckily for them, they were able to find some friends. In this week’s UNCANNY X-MEN #13, writer Matthew Rosenberg sends the group on what Magik appropriately deems a suicide mission: to take down all of the X-Men’s major villains. Can they do it? Probably not, but since they’re X-Men, they’re willing to give it their best shot.

Teamed up with the regular UNCANNY artist, Salvador Larroca, and colorist Guru-eFX, Rosenberg gives readers a surprisingly realistic and gritty look into what life would be like if the X-Men (or, at least most of them) suddenly disappeared. While far from perfect, UNCANNY X-MEN #13 gives better action scenes and characterization than the past few issues. For a modern X-Men book, that’s a big deal.

Ever since the X-Men became pretty much just Cyclops and Wolverine (back in UNCANNY X-MEN #11), things have been a little slow. These characters are clearly living in a world they don’t belong in anymore and they don’t really have anything to do. By banding together, they were able to save the New Mutants from prison (and experimentation), but after that, their mission appeared muddled. In UNCANNY X-MEN #13, things become a lot clearer.

Cyclops, as always, has a plan. Armed with a list of every X-Men villain currently in existence, he plans on “hunting” them down (but not killing them). He reasons that, without the X-Men, these villains could cause serious harm. The other X-Men agree and, by the end of the issue, they have Dark Beast chained up. And then, at the worst (or best) moment possible, Hope shows up.

The Power of Purpose

The X-Men need purpose. They need people throwing rocks at mutants, or Sentinels tearing up their school. Those things give them something worthy to do. Without those things, the X-Men don’t exist. In UNCANNY X-MEN #13, people hate mutants, just like they always have. The only difference, now versus then, is that the X-Men are no longer there to do anything about it.

Without everyone, Cyclops realizes that there’s no way he can do all the things the X-Men used to do. However, he knows that the remnants of the X-Men still have a purpose for being heroes: they have to save the world and die trying.

Rosenberg’s decision to give Cyclops this intense revelation is bold, brilliant, and, best of all, realistic. With the AGE OF X-MAN going on, a strong dose of reality in X-Men comics is nice. While Jean, Nightcrawler, and the others live in utopia, Cyclops and Wolverine are nearing an inevitable end. This aspect of the issue is powerfully sobering.

Cyclops and Wolverine may be the stars of UNCANNY X-MEN #13 but, fortunately, that doesn’t mean they hogged every panel for themselves. Rosenberg did an excellent job of giving almost every character at least a small moment to shine. From Havok’s emotionally heavy conversation with Cyclops near the end of the issue to Rahne’s hopeful interjection about the lost X-Men’s fate, UNCANNY X-MEN #13 refuses to feel like a Cyclops fan-fest. As someone who isn’t the biggest Cyclops fan, I really, really appreciate that.

While everyone got a little panel-time, Magik really took the spotlight when she defeated (or, at least subdued) Dark Beast. As of late, Magik has not been as pivotal of an X-Men character, since she recently re-joined the New Mutants. It’s good to see her taking down the big bosses once more.

When it comes to artist Salvador Larroca’s work, everyone seems to have an opinion. As I said in my UNCANNY X-MEN #12 review, I don’t want to take such a strong position, for or against his artwork. For me, there are elements of his style that are quite realistic and work well in a comic book, but there are also aspects of his style that make figures appear robotic and emotionless. His work has yet to impress me or offend me. It’s just kind of “meh.”

Colorist Guru-eFX does a solid job creating two defined palettes within UNCANNY X-MEN #13: one cool-toned and one warm-toned. This creates a nice element of contrast that colorists often times forget about when trying to give a comic a certain “mood.”

The past couple of UNCANNY X-MEN issues have been disappointingly “okay.” I’m happy to say Rosenberg’s story has officially graduated into the status of “good” and, at points, better than good. The clever dialogue, entertaining action sequences, and well-balanced characterization all make for a quality issue. Even if you haven’t been enjoying UNCANNY, I recommend giving this issue a try. It might just change your stance on the series.