AGE OF X-MAN was an ingenious idea. It was meant to be the perfect combination of past and present X-Men themes and characters. It could’ve become a landmark event in X-Men history. However, because of some uniquely terrible pacing, it won’t be. No one will remember AGE OF X-MAN as a must-read title. Still, that doesn’t mean it can’t be enjoyable in the moment. The AGE OF X-MAN won’t be the AGE OF APOCALYPSE. Still, thanks to issues like AGE OF X-MAN: THE MARVELOUS X-MEN #4, it will be far from a complete failure.

Writers Lonnie Nadler and Zac Thompson bring readers another step closer to the end in one of the most successful AGE OF X-MAN issues yet. It works so well because AGE OF X-MAN: THE MARVELOUS X-MEN #4 has the one thing so many of the other AoX-Man issues haven’t had: excitement. Add in some quality art via Marco Failla and some emotional characterization, and you have a comic worth buying. 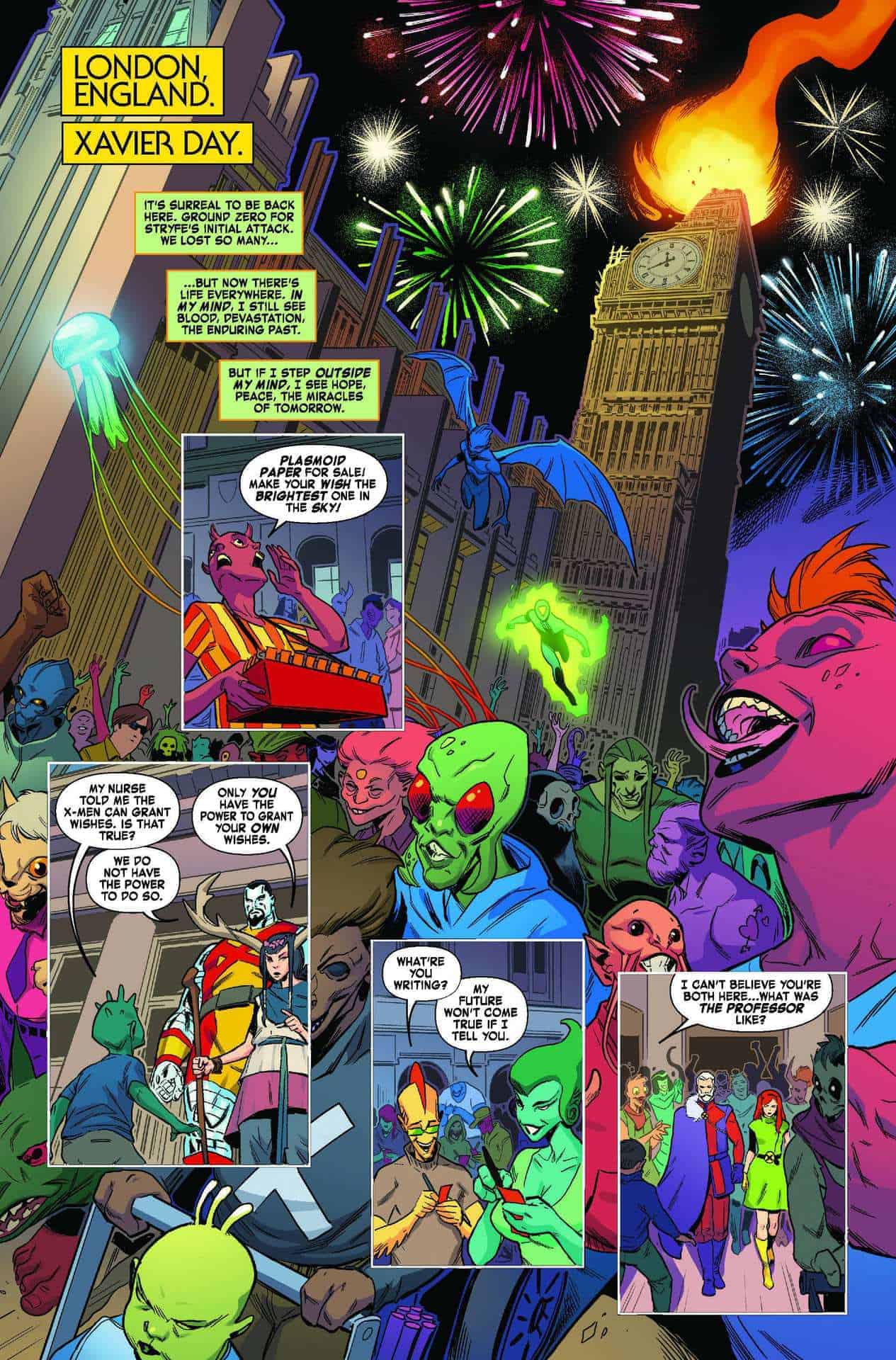 Reality is Breaking in AGE OF X-MAN: THE MARVELOUS X-MEN #4

Throughout various cities, huge psychic fractures have emerged, showing memories from the “real” Earth-616 reality. After dismantling a “love fest” (Apocalypse’s words, not mine), X-Man enlists Jean’s help in closing them. Unsurprisingly, he seems troubled by the fissures and shows physical stress when trying to close them. Jean sees one of these memory fissures depicting her and Scott, but calls it blasphemous propaganda, choosing to side with Nate, instead. Still, Nate’s comment about Jean being “the best” (we don’t get a clear definition of what he means) seems to hint at her involvement in the end of the AoX-Man. 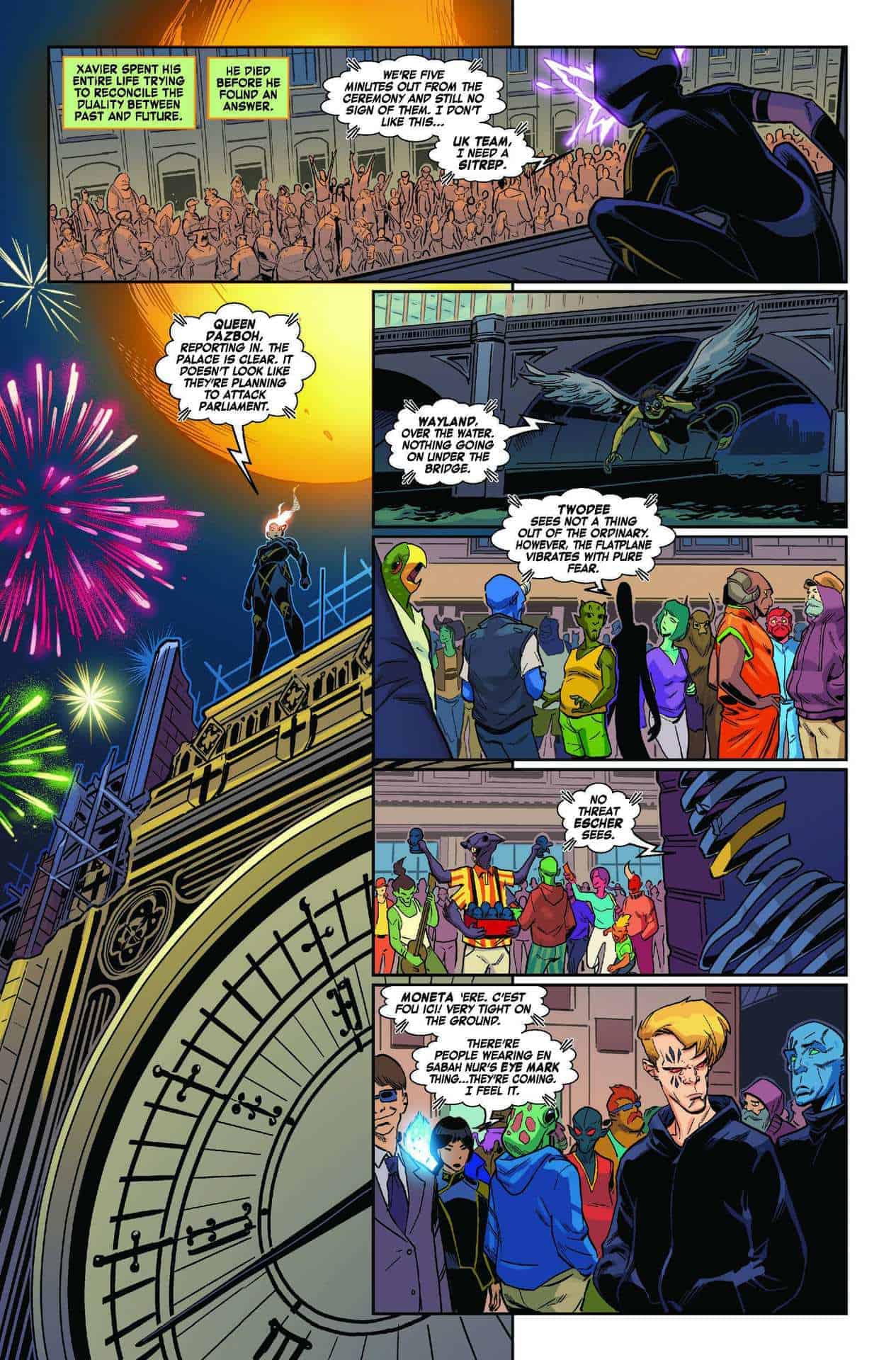 This issue also sees Colossus randomly kissing Kitty Pryde during Xavier’s Day. As overdramatic as the kissing scene is, it does make sense. These two have a long history. After the kiss, Colossus flees the X-Men and must fight the X-Tremists to get away. I wouldn’t be surprised if he now joins Kitty and Apocalypse in the pages of AGE OF X-MAN: X-TRACTS.

Let’s get one thing straight: I know Jean isn’t technically Nate’s mom. He’s from a different reality, where Mr. Sinister genetically tampered with Scott Summers’ and Jean Grey’s DNA, thus creating Nate. Still, Nate and Jean have a special bond that feels familial at points. Before AGE OF X-MAN, Jean was the only one who could hope to get through to him.

In AGE OF X-MAN: THE MARVELOUS X-MEN #4, it’s clear that Nate’s struggling mentally, and he’s trying to use Jean to make him feel better. Unfortunately for him, the woman Jean was in X-MEN RED isn’t the same woman in AGE OF X-MAN: THE MARVELOUS X-MEN #4. She doesn’t see him as a son anymore. She doesn’t see the X-Men as a family. Her views on relationships in the AoX-Man are completely different.

Nate asks Jean if she has trouble relating to people. She says that she hasn’t since everyone became a mutant. These lines perfectly show how lonely Nate is, and how he desperately wants that familial bond he once had with Jean. However, because he removed the idea of family in the AGE OF X-MAN, that bond is gone. It might be too early to say, but I think he’s starting to feel a little guilt over what he did, and being around Jean is only making that guilt fester. 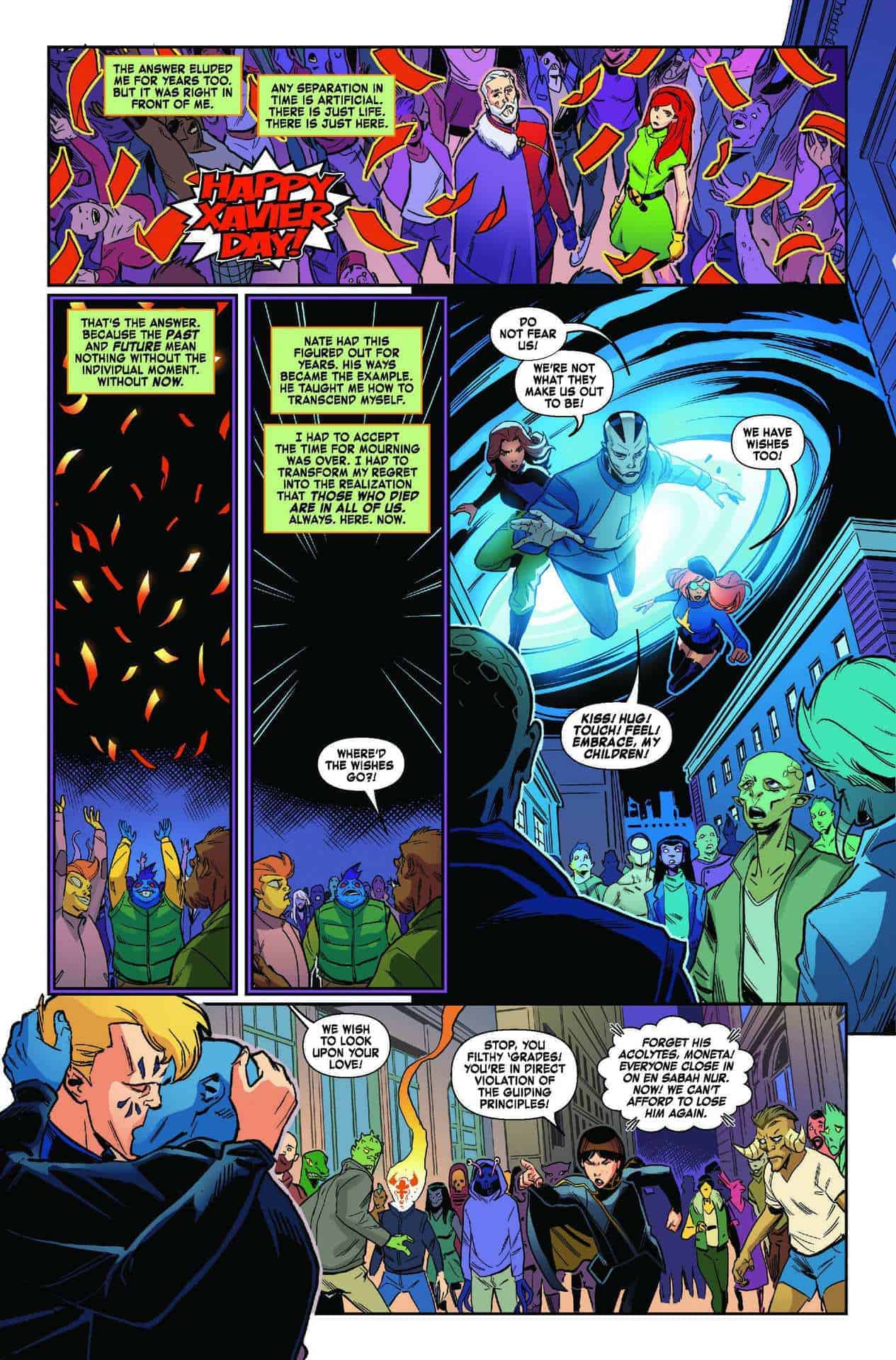 When I say Jean might be the key to ending AoX-Man, I don’t mean that she’ll lead some sort of charge like Apocalypse. I think her presence and her previous relationship with Nate may force him to give up the Age of X-Man charade.

Many of us feel like AoX-Man has been going on for way too long. This thing needs to end. Most of the AoX-Man titles have two issues left. That might not sound like a lot, but considering there are five AoX-Man titles, it’s actually quite a few.

Part of the reason why I enjoy AGE OF X-MAN: THE MARVELOUS X-MEN #4 is because it finally pushes this huge storyline to a climatic point. The reality fissures prove that Nate’s reality can’t last forever. The whole “people are noticing something is amiss” plot is fun for a few issues, but when it happens over and over across all of the titles it becomes redundant. AGE OF X-MAN: THE MARVELOUS X-MEN #4 gives us something new to consider.

Major plot points like Colossus give this issue some much needed excitement, and it’s these sorts of things that keep readers enthralled and ready for the next installment.

A Matter of Opinion

Everyone has their own ideas when it comes to “good” comic book art. I couldn’t stand Salvador Larroca’s work in UNCANNY X-MEN, but some readers really liked it. Personally, I like most of Failla’s panels, particularly those with X-Man in them. He does an excellent job of showing Nate’s emotions, even when he’s silent. Some of the other characters have distorted facial features at points, but I like Failla’s style enough to ignore that. Of course, if you’re not a fan of comic artists who work in a heavily stylized fashion, I can see why Failla might not be your favorite. 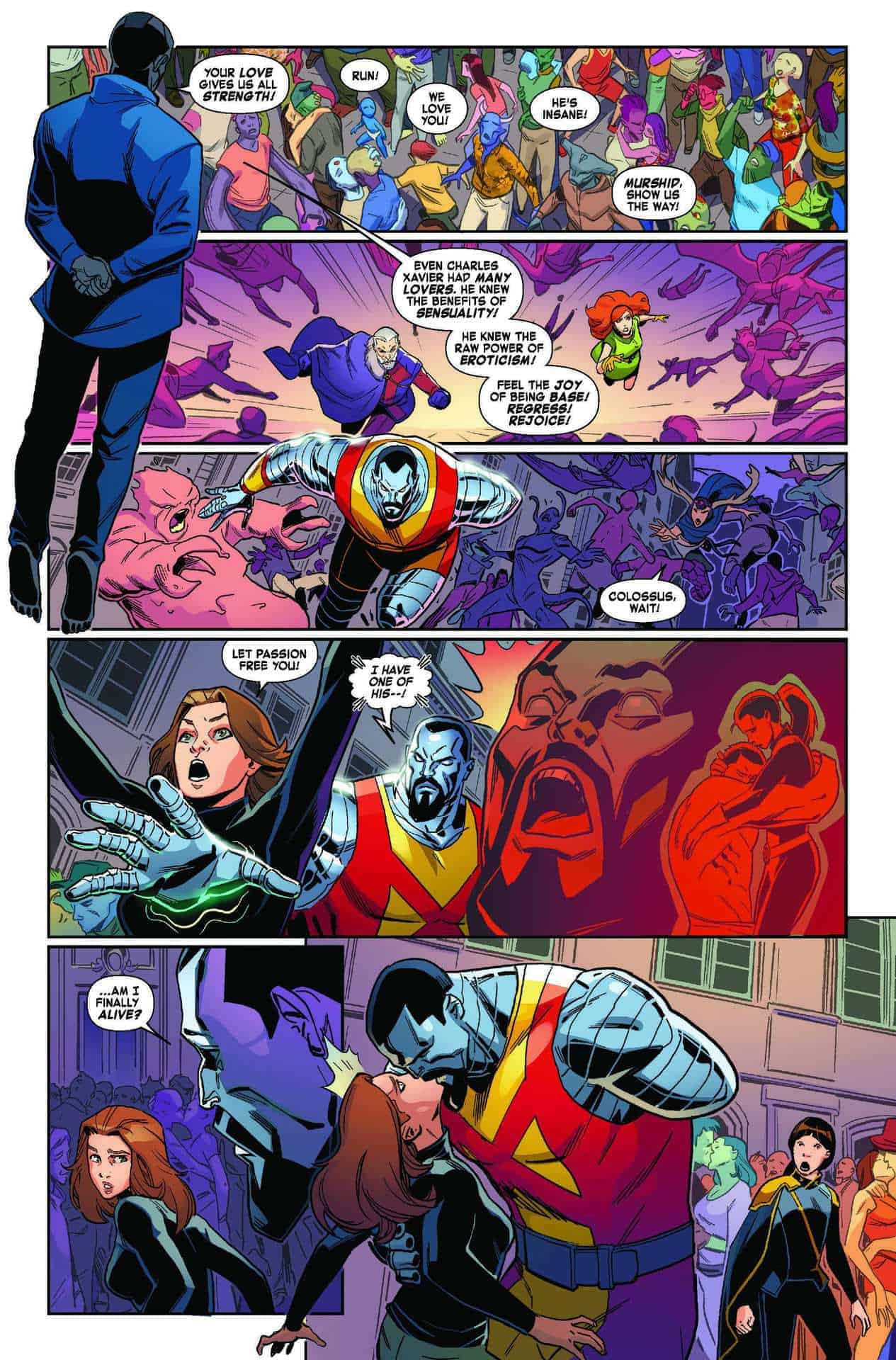 As I’ve said in past reviews, I tend to think heavily saturated palettes work better for AoX-Man, since this reality is supposed to be idealized. Veteran Marvel color artist Matt Milla accomplishes this perfectly.

AGE OF X-MAN: THE MARVELOUS X-MEN #4 Refused to Fail

If you haven’t been keeping up with AoX-Man, don’t start with AGE OF X-MAN: THE MARVELOUS X-MEN #4. However, if you’ve already bought your ticket for this crazy and somewhat underwhelming storyline, AGE OF X-MAN: THE MARVELOUS X-MEN #4 has to be on your to-buy list. It offers the excitement that AoX-Man has been lacking, and it has the intense characterization all comic fans love.