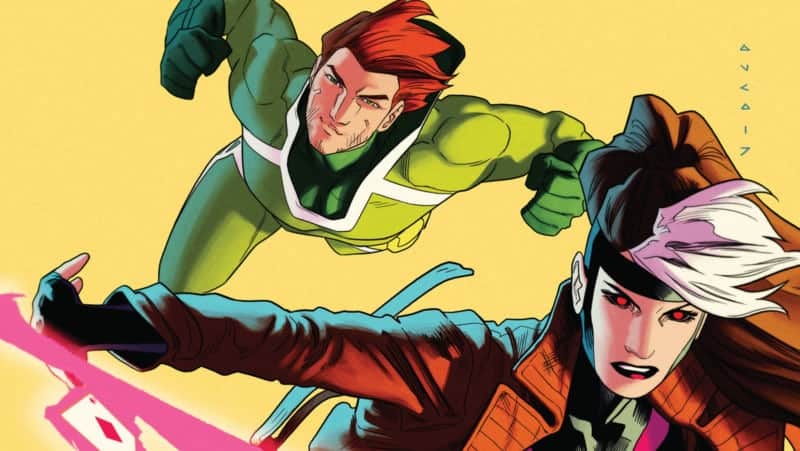 Previously in ROGUE & GAMBIT, our titular heroes went on an undercover mission to investigate the mysterious disappearances of mutants on the island of Paraíso. Their time on the island together has spurned a series of unexpected events. Firstly, Rogue and Gambit seem to be taking their counseling sessions, something they were participating in only to maintain their cover, seriously. Additionally, and perhaps more surprisingly, they found themselves engaged in a brawl against clones of themselves. ROGUE & GAMBIT #4 picks up right where its predecessor left off as we discover what exactly happened to our X-Men after they were captured by the villainous Lavish.

Writer Kelly Thompson’s series has been pretty solid so far. So, let’s see how this installment fares amongst the rest!

The Plight of the Power Shortage

ROGUE & GAMBIT #4 kicks off with our titular heroes finding themselves strapped to tables in a strange facility. They come to realize that Lavish has detained them here in an attempt to complete the process of draining their powers for her benefit. Rogue and Gambit engage in some humorous banter to distract Lavish as Gambit frees himself from his restraints. When he does, he fights Lavish off to give him enough time to free Rogue.

Lovers Unite Against Themselves in ROGUE & GAMBIT #3

The two manage to get away from Lavish. However, unsurprisingly, escape is never that easy.

Rogue and Gambit are immediately confronted by clones. Another fight against the clones ensues, but with some twists. When Gambit makes contact with one of Rogue’s clones, he experiences an intense flashback to an interaction with Rogue at Scott and Jean’s wedding. Interestingly though, he experiences the memory through Rogue’s perspective. Rogue ends up experiencing the same effect as she destroys a Gambit clone and revisits a memory through Gambit’s perspective.

On top of these flashbacks, Rogue and Gambit’s contact with the clones granted them the powers of the opposite person. Unexpectedly, they both utilize the other’s powers with prowess.

The Truth Comes Out

Now, the most heartbreaking part of this issue comes when Rogue and Gambit realize that the reason they have been getting along so well on the island is because Lavish was not only absorbing their memories, but also the faults and negative aspects of their relationship. As a result, they have been living in a euphoric state. The two consider remaining in their condition and succumbing to a powerless state. However, they accept that they must confront Lavish and regain their powers, even if it means the next stage of their relationship may be more difficult to traverse.

The Women of X-Men: Making Strides For Over Fifty Years

Thus, ROGUE & GAMBIT #4 brings a new layer of intimacy to the two’s relationship. They engage in each other’s memories, providing them with new understandings of the pain they had experienced at certain points during their time together. I particularly appreciate how Thompson implements realism into this issue. Rogue and Gambit could have easily accepted the falsity of their current, euphoric state and continued living in that fantasy. However, they choose to continue on and face the unpredictability of reality, a hurdle many in the real world struggle to confront.

The Many Hues of ROGUE & GAMBIT #4

In regard to the artwork of ROGUE & GAMBIT #4, artist Pere Perez brings solid, consistent illustrations to the installment. I particularly enjoy the way he depicts and parallels Rogue and Gambit’s respective reactions to the flashbacks they experience. He closes in on their expressions, elevating the significance of that specific moment in the narrative. With this though, some illustrations were more cohesive than others. There were moments, particularly in the action sequences, where the characters blended into their background. Despite these faults, the emotional aspects of the artwork contribute to the poignancy of the overall narrative.

In regard to the issue’s tone, colorist Frank D’Armata juxtaposes Perez’ work by showcasing a seamless transition from a dark hue to a lighter one. This approach gives a light-hearted vibe to the bittersweet conclusion of the issue. Thus, though Rogue and Gambit are about to enter an intimidating battle and uncertain state of their relationship, the two will continue to maintain hope.

ROGUE & GAMBIT #4 is arguably the best installment in the series thus far. It will not only entertain you, but it will also leave you in your feels. We can only predict what lies ahead for our titular heroes. Unfortunately, we have to wait an entire month before we discover the fate of the two X-Men lovers.