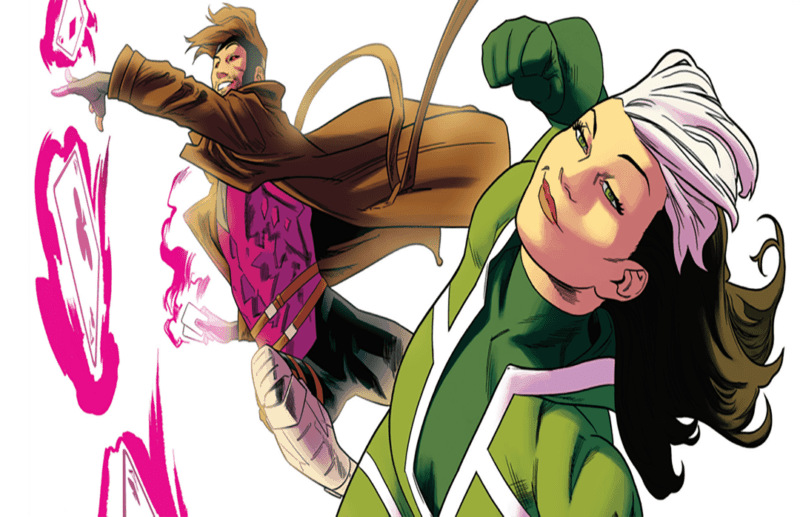 Their cover? Well, they’re a couple a seeking therapy. Though the two’s therapy sessions are taking place merely for appearances, they have unveiled new facets of the mutants’ respective perceptions of their long, on-off relationship together. So, what did their latest adventure reveal in ROGUE & GAMBIT #3?

Well, find out below!

About That One Time…

ROGUE & GAMBIT #3 kicks off with yet another therapy session. The two recount the time of their first sexual encounter in Antarctica. They agree their time there simultaneously served as the beginning and end of their relationship since their trust for one and another began to waver then.

Just as she has done in previous issues, I love the way writer Kelly Thompson has been implementing these flashbacks into the story. They do not detract from the overall narrative. Rather, they showcase the growth of Rogue and Gambit since the time of those moments.

Attack of the Clones

Now, in regard to the story, the X-Men duo have begun experiencing some strange events. Firstly, they are having lucid dreams. Additionally, their powers have begun to fade, which ultimately contributes to a tender moment between the two former lovers. Interestingly though, they don’t seem as freaked out about that as they should. This can be attributed to their inexplicable, simultaneous feeling of euphoria and fear on the island.

Perhaps the strangest event they encounter is a hospital room full of their clones that end up attacking them. Paraiso Island is housing something strange and unexpected, but will Rogue and Gambit unveil what’s really going on? Well, they get a taste of who’s in charge in the final page of the issue.

Without giving too much away, ROGUE & GAMBIT #3 is a solid issue from start to cliffhanger end. Thompson brings our titular heroes closer together by almost stripping them of their powers and exposing their vulnerabilities. She also juxtaposes important, detailed moments of dialogue with plenty of action to keep all readers satisfied. Ultimately, the series thus far has felt like a non-stop adventure. It is light-hearted and fun. As a result, its third installment continues the trend of the series with another entertaining journey.

The Many Hues of ROGUE & GAMBIT #3

The work of artist Pere Peréz excels in ROGUE & GAMBIT #3. His illustrations are consistently detailed. I particularly enjoy his execution of the flashback sequences. He nails the emotion the narrative conveys in those moments. Additionally, colorist Frank D’Armata depicts a cohesive, tonal transition in those same sequences.

Overall, the tone of the issue is relatively light. D’Armata maintains that lightness throughout his work in the issue. Thus, we are able to engage in this mysterious vacation the two X-Men are undertaking. Overall, my personal favorite artistic sequence is the confrontation between Rogue and Gambit and their clones.

The sequence continues to maintain D’Armata’s vibrant hues as the X-Men take on their former personas. It is an intriguing clash of the past and present that Peréz accurately captures. The artwork of ROGUE & GAMBIT #3 is definitely among the issue’s stronger points. Hopefully, that trend continues in future installments.

ROGUE & GAMBIT #3 continues the streak of the series thus far as it excels in its characterization of its titular heroes while employing plenty of entertainment to keep readers on their toes. There is a dark mysterious entity lurking throughout Paraiso Island. We have gotten a taste of what that entity is, but Rogue and Gambit have now found themselves face to face with it upon the conclusion of this issue.

Will they be able to utilize their therapy sessions to unite and fight the enemy in charge? Or will they succumb to the spell of the island and become yet another casualty of paradise?

We’ll just have to wait and see!