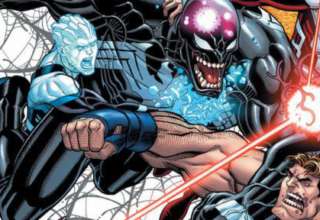 This January a new intergalactic threat known as the Poisons is coming to disrupt the fabrics of the Marvel Universe! Despite an appearance in VENOMVERSE, Marvel is keeping these alien bad guys mysterious.

While this diabolical group of bad guys does sound interesting, the true excitement comes from the heroes we will see facing off against the Poisons. Marvel says that only the X-Men, with the help of Venom, can stop the Poisons!

This will begin a new crossover event titled POISON X featuring Venom and the X-Men. The event will begin in X-MEN BLUE ANNUAL #1 by Venom extraordinaire Cullen Bunn. Bunn will be writing concurrently with his VENOM INC. series which plans to crossover Spider-Man with Venom.

Between VENOMVERSE, VENOM INC. and POISON X, Marvel is putting a lot of emphasis on Venom. It looks like he will become a bigger fulcrum in the entire Marvel universe. As a character who started off as an edgy version of Spider-Man, Eddie Brock’s Venom has really come a long way.

I’m also exceptionally curious to know the X-Men’s role in this series. Why are they the only team that can stop Poison? Will other characters from the cosmic universe make appearances in this arc?  I for one am happy that the X-Men are returning to space. Some of the best mutant stories take place outside Earth’s orbit.

Overall the X-Men and Venom haven’t done a lot of interacting, but I think this serves as an amazing opportunity to create a distinct relationship between the two. The X-Men and Venom comics are among the most popular comics in Marvel’s sales currently, so it makes sense that the comics would want to crossover these massive titans.

Don’t miss the start of POISON X this January with X-MEN BLUE ANNUAL #1 by Cullen Bunn and art by Edgar Salazar!