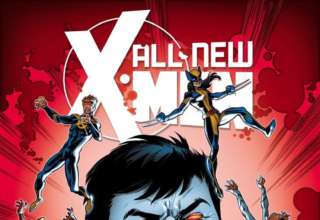 The latest issue of ALL-NEW X-MEN launches the book into the heart of Apocalypse Wars. Using Evan (Kid Apocalypse) as its central figure, it brings forth a heartbreaking chapter in the saga and also propels the book into an exciting new story. It’s the sort of shake-up this book so desperately needed.

READ: Still behind? Check out our review of last month’s ALL-NEW X-MEN!

The issue begins at Evan’s birthday party. What seemed like it would be a fun and goofy event quickly turned tragic as Evan, feeling alone and sad, went off and used Pickles to teleport to a small town in the midwest. In doing so, he revealed his inner depression and how he “smiles because he has to” in fear of others thinking that he was on the verge of becoming the man he was cloned from, Apocalypse. Then, after an incident in Hank McCoy’s lab, he and Beast are sent hundreds of years in the past to the heart of Egypt where they’re forced to fight for their lives.

This is, possibly, the best issue in the series yet. Dennis Hopeless hits his stride in taking the time to center on a single character, usually something that holds the book back. However, his choice to highlight themes of depression and loneliness really make the story stand out. Evan is an extremely tragic figure. Like most mutants, he feels alone. However, he struggles to find his place among the rest because he knows they fear him in the back of their minds. He constantly questions his place and wonders if he could ever truly be happy, considering his best memories aren’t real. This is the kind of heart the book has been missing over the past few issues. While most mutants often doubt themselves, Evan is forced to question whether or not he is a good person because he comes from such evil roots.

The book’s 180-degree turn in its second half could have felt jarring, but the team pulls it off masterfully. The reader goes instantly from Evan’s headspace to ancient Egypt in a matter of panels and is instantly thrown into a new world of terror and excitement. This new setting is full of new surprises, and Beast and Evan are going to have their work cut out for them. It will be interesting to see where the story goes from here, but it’s got a lot of potentials. We have seen, at best, pretty mediocre adventures so far from this book, and now the team has a chance to do something truly crazy. Finding young Evan in this setting, dealing with the twist on the final page, knowing Beast is out there alone, and wondering what the team in the present thinks happened to their friends is a promising start for what could be a great new arc.

Oddly enough, it feels as if artist Mark Bagley’s characters are less… Bagley than ever. His classic way of drawing overly-toned, yet extremely emotive bodies seems to have been put aside. While characters like Beast still show off the over-exaggerated muscles that were present in his work in books like ULTIMATE SPIDER-MAN, it is less noticeable in this run. Sadly, that sort of feel could work great in this book, considering the majority of the characters are teenagers. However, it is not a bad thing. The art just doesn’t seem to stand out. Again, this isn’t a negative aspect; it is only to say that it feels like there could be more done to make the characters and the setting pop. Characters are still drawn well, and Evan’s sadness was clearly expressed on a lot of pages, there is just a little more to be desired from the book.

Overall, the issue is a fantastic entry into Apocalypse War. While the last few issues of ALL-NEW X-MEN have been somewhat lackluster, this one picks up the pace regarding character and action. While the art may not be overly outstanding, it is still easy to call this book great.