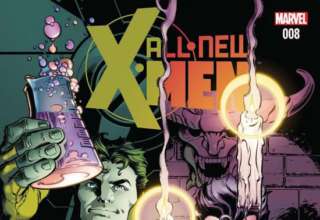 The latest issue of ALL NEW X-MEN by Dennis Hopeless and guest artist Paco Diaz is a step backward for the series. Instead of moving forward with its own adventures and characters, it devotes an entire issue to a story that really feels like the creative team is wasting time until the next big crossover event. With almost no inclusion of the team’s most interesting heroes, it is a slog fest through an uninteresting adventure with Marvel’s Sorcerer Supreme.

The issue centers on Beast and his quest to send himself and his fellow young X-Men back to their time period. Thanks to a convenient news broadcast, he heads out west to find Doctor Strange and ask for help. In doing so, they battle a couple demons and talk about…magical theorems? Beyond that, the issue offers little more.

READ: Miss out on the last issue of ALL NEW X-MEN? Check out our review!

Hopeless is in a hard place with this issue. The plot is far less than thrilling and the events that unfold feel gimmicky and forced. Again, he falls out of what makes this issue great: its diverse roster of X-Men. Instead of using that to his advantage, the issue centers on Beast who is, arguably, the least interesting of them all. Again, Hank McCoy is searching for a way to find his friends and AGAIN he fails.

READ: Need some more mutants in your life? Check out our podcast about the NEW MUTANTS!

There is one interesting part of this issue, however. Hank gives an intriguing monologue about the current state of the world and his friend’s lives to Cyclops, who lays unconscious in his hospital bed. Hopeless turns Hank into a somewhat tragic figure for a few moments, highlighting his guilt and the tragic misunderstanding of Scott Summers in a world that hates him. Sadly, these moments are not carried throughout the rest of the issue, leaving them forgotten amidst some awkward moments with Doctor Strange.

The issue’s greatest fault is its art. Paco Diaz’s disproportionate characters do not fit with the grim circumstances in which they exist. A tragic scene between Hank and Scott is turned into an almost comical page of absurdity thanks to Hank’s small head on an outrageously large body. The emotions Hopeless writes into the dialogue are lost among muddled and cardboard-like facial expressions. It is is a difficult thing to be thrown into a book with an artist like Mark Bagley as the regular artist. However, Diaz’s work just doesn’t fit with the setting and themes of Hopeless’s story.

With the coming “Apocalypse War,” it is safe to say this book is in store for a needed change. It is a shame that it takes an event to do so, but if Hopeless and company can remember the excellent roster of mutants at their disposal, the book can great again.