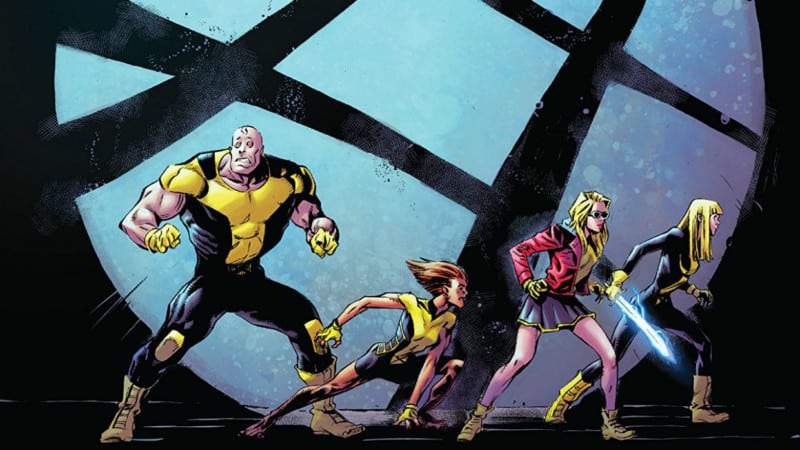 In practice, the original NEW MUTANTS series didn’t shy away from its weirder aspects. Whether the team was fighting a demon bear or the inner psyche of Legion, they constantly trod ground that their X-Men predecessors wouldn’t. Now, in NEW MUTANTS: DEAD SOULS #5, the new series seems to honor this tradition. As the team ventures into Dr. Strange’s Sanctum Sanctorum, reality bends back upon itself. The team must venture through their own nightmares in order to find the villainous Tran. But with Tran’s own magical machinations at work, can the team stop this demonic threat?

The House of Strange

The previous issues in the NEW MUTANTS: DEAD SOULS series have come across as rather serious. The high action has balanced this, but altogether, these issues have focused on the darker aspects of this team’s missions. NEW MUTANTS: DEAD SOULS #5, though, hit on a tone that felt right for the series. This is a really fun issue, with enough weird magical hijinks to keep the interest high. This tone better fits the characters in my opinion. This team is rather ridiculous in its nature. After all, Illyana on her own was the queen of Limbo for a time. It doesn’t get much stranger than that.

With that said, writer Matthew Rosenberg still manages some rather intense serious moments throughout the issue. The true success of this comes from his ability to balance these elements. We bounce back and forth around the Sanctum Sanctorum, getting to see not only the odd elements but the nightmarish ones as well. Here, setting gives Rosenberg a ton of room to experiment, considering that Strange’s house holds so many different types of magic.

I did find myself confused a few times throughout NEW MUTANTS: DEAD SOULS #5. Most of this isn’t wholly Rosenberg’s fault. After all, adding magic into a story essentially paves the way for Deus ex Machina from the beginning. So many events in this story just happen for no necessary reason. Because Illyana refuses to tell her teammates why they are at Strange’s home, we the reader cannot fully know. More importantly, the final confrontation with Tran feels a bit anticlimactic for this reason. A few magical spells get thrown around, and then the fight is over. The consequences, too, aren’t fully explored. I really enjoyed this plot, but there were definitely places that could have been improved.

Despite this feeling of anticlimax, NEW MUTANTS: DEAD SOULS #5 has some rather deep characterization. For several issues now, Rahne’s hatred of Guido has heated up, and this issue finally sees the conclusion of these emotions. The way Rosenberg handles Guido’s apology, showing that Rahne and Guido both grieve the moment of Rahne’s son’s death, truly works. Even Rosenberg’s work with Illyana has evolved. Tran plays on her insecurities, her inability to control her dark half. That adds a powerful subtext to the final battle, especially considering the loss that the team suffers.

My primary issue with NEW MUTANTS: DEAD SOULS #5’s characterization comes from the amount. We get a lot of different perspectives in this issue, and Rosenberg manages to cover a lot of ground. However, because of this, he doesn’t quite push the characterization as far as it could go. Tran is a perfect example of this. As a foil for Illyana, he is brilliant. He knows exactly what buttons to push to set her off. However, Rosenberg never fully explores Tran’s motivations or why he needed Strange’s house. The same can be said for Guido and Rahne’s reunion. The hatred goes away just a bit too quickly. This characterization is incredible, for the most part. Rosenberg simply needed to take each section a degree further.

Adam Gorham continues his stellar work in NEW MUTANTS: DEAD SOULS #5. His style has grown on me from the first issue of this series, and he has definitely improved throughout his time with this series. There are a few moments where you can tell something in the expressions or anatomy feels off. However, the way Gorham handles the atmosphere of nearly every situation in this issue feels perfect. Gorham knows how to set a scene. In the more fun sections, like Rictor’s conversation with snakes, the visuals are brighter and cleaner. Meanwhile, the nightmare sequence with Guido and Rahne feels brilliantly psychological. The way he depicts their shared madness in this sequence is deeply brilliant, and I can’t wait to see how he tackles subject matter like this in the future.

Spoopy Ghostoween 2017: NEW MUTANTS and the Horror of Adolescence

NEW MUTANTS: DEAD SOULS #5 shows just how far this series has come. While I will argue that Rosenberg’s work on the previous issue represented his best, this issue manages to build on that successful formula. By delving into the weirder elements of the source material, Rosenberg’s story does lose a bit of clarity. However, he makes up for that with the fantastic characterization. Pair this with Adam Gorham’s continually evolving art style, and NEW MUTANTS: DEAD SOULS #5 shows exactly what potential this series has.