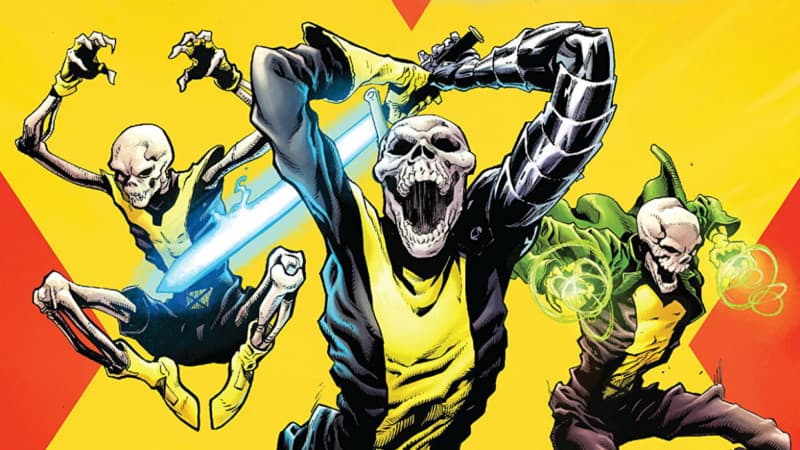 Matthew Rosenberg’s series NEW MUTANTS: DEAD SOULS has done a lot of things right. It has done more with comic book action than I ever thought possible. Even the supernatural elements, used a number of times in other media, have felt incredibly fresh. However, Rosenberg’s story has left little room for character. His plots take center-stage while the characterization falls to the wayside. However, with the release of NEW MUTANTS: DEAD SOULS #4, things are beginning to look up. With the team reeling from a mission failure, Illyana Rasputin must face the hardest part of leadership. She must attend the funeral of one of her teammates. But is everything as it seems in the world of the New Mutants? Or has the villainous Tran crafted a devious illusion for our heroes?

Matthew Rosenberg did something incredible with NEW MUTANTS: DEAD SOULS #4. He made this story do a complete 180-degree turn. This isn’t the action-packed epic that the series has become. Rather, the funeral scene that takes up the bulk of the plot is a slow, unwinding journey. In this way, Rosenberg didn’t just improve on his characters. He gave this story a much deeper variety of storytelling. No longer is it consigned to its adrenaline rush format. This series can now tackle serious narratives believably because that is exactly what this issue is. It is a believable and ever realistic look at the loss of a friend and teammate. Rosenberg succeeds with every turn and twist of this story, making this issue the best in the series by far.

With that said, though, I am still incredibly confused by the continuous ending sequences. Each issue has showcased former New Mutant Warlock in a somewhat horror-infused narrative. Each short snippet seems to signal that Warlock will play a larger role in the grand narrative. However, by NEW MUTANTS: DEAD SOULS #4, I wanted a lot more out of these segments. They just seem to be a dark step away from the main events, with little actual importance. I can’t help but feel like they deserve an issue all their own. Why Rosenberg didn’t just tell the story in one go is beyond me. At the moment, these segments feel choppy and unfinished, and without a resolution soon, I fear that they will take more away from the reading experience.

The Power of Character

The main reason NEW MUTANTS: DEAD SOULS #4 works so well comes from the characterization. Thus far in the series, I couldn’t say I understand any of the large cast of characters. I am new to X-MEN lore, and these characters seemed to constantly call back to former points in their history. Not so here. Rosenberg uses the funeral section in a brilliant way, choosing to avoid the general assembly to focus on Magik. Her loss in this issue feels so realistic and profound in this issue. She is, after all, team leader, and the loss of Rictor deeply wounds her sense of self. She doubts her abilities as a warrior and as a leader. As sad as it seems, the heartwrenching nature of her character here truly speaks to the strength of the characterization.

What to Read After Seeing AVENGERS: INFINITY WAR

There is still one element of the characterization that I need explained. For the first two issues, Wolfsbane and Strong Guy seemed to be on decent terms. No enmity seemed to exist between the two. Suddenly, in the last two issues, Rahne has wanted to rip Guido’s throat out. This change of pace gets no explanation, and as someone unversed in X-MEN comics, I don’t understand where it comes from. This particular squabble needs to be addressed soon for me to keep caring for these characters. It seems like an important story element, but it has barely gotten two panels of page time.

The Mad and the Brave

I have to say how nice it is to see NEW MUTANTS: DEAD SOULS #4 through a less chaotic lens. I have only seen artist Adam Gorham’s work in his intense action sequences. However, it has been said that the true caliber of a comic book artist is their ability to depict a simply conversational scene. Gorham does a fantastic job in this issue, detailing the level of sadness beautifully. Little changes in his work, like a heavier inking style, as well as Michael Garland’s amazing color work, really set the atmosphere of the story. I also have to take note of Gorham’s sense of scale. The diversity between character appearances looks truly impressive. When Illyana sits next to her brother Colossus, the difference is profound and deeply striking.

NEW MUTANTS: DEAD SOULS #4 is the best issue in the series thus far. Is it perfect? No. The plot elements surrounding Warlock need to get tied up soon, and the character moments between Wolfsbane and Strong Guy need some more context. However, this issue fixes a lot of the problems the series has had in the past. The in-depth and believable focus on a grief-stricken Magik makes this book stand out amidst the slew of modern X-titles. This is a must-read for comic fans, as it portrays one of the best sad moments to come out of the medium.