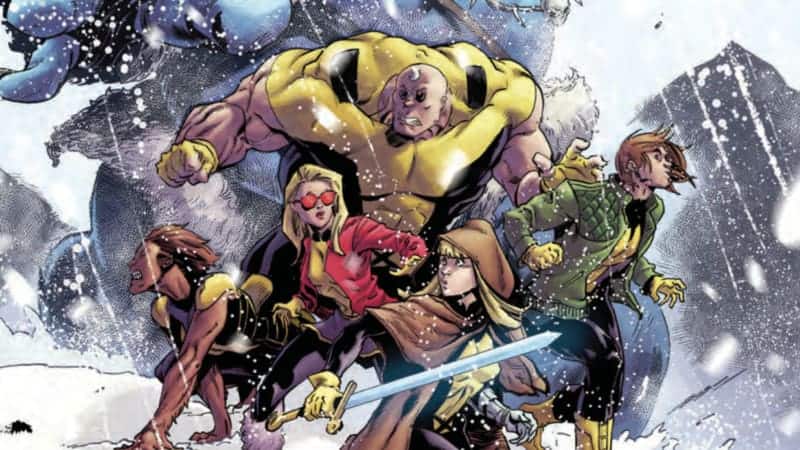 NEW MUTANTS: DEAD SOULS #1 set itself apart from other X titles with its supernatural focus. This isn’t a team built to fight for mutant rights. The members of this team are a paid fighting unit, sent after supernatural threats. I hesitated to like this concept in the previous issue. It seemed so far out of left field for an X-Men book. However, NEW MUTANTS DEAD SOULS #2 manages to ease my concerns for the series. While more action focused, writer Matthew Rosenberg manages to give readers a story that feels very entertaining. More importantly, it pits the New Mutants against threats they’ve rarely faced before. Did you want a few Frost Giants in your daily dose of mutants? Then look no further than this issue.

A Second Look at Felicia Hardy AKA Black Cat: Copycat Burglar or Challenger of the Status Quo?

Into the Land of Snow and Ice

Issue #1 of this series faltered a bit in its characterization. It was little more than zombie-battling action. While sometimes that can suffice, most readers want a bit more personality in their story. Thankfully, Rosenberg steps up his game in NEW MUTANTS: DEAD SOULS #2. The members of the team have more personality here. They feel less like superhero caricatures. I especially enjoyed the opening sequence in which Rictor and Wolfsbane question their loyalties to the team. After all, Illyana Rasputin did fail to share the specifics of their new jobs. They fear what the next supernatural threat will be, as they rightly should.

I will say, though, that NEW MUTANTS: DEAD SOULS #2 has some room to grow in this department. I am okay with motivation-less villains on certain occasions. After all, zombies and giant monsters only act as proxies to explore very human themes. However, the characterization of the heroes needs to be especially strong. At this point, the team’s leader has almost no personality. Considering Magik’s popularity, this seems like a really drastic oversight. Even former X-Force member Shatterstar makes a brief cameo, but with very little substance. This issue definitely seems like a step in the right direction, but Rosenberg still needs to focus a bit more on the cast.

The main draw to NEW MUTANTS: DEAD SOULS #2 is its action-heavy plot. Very few writers handle high-intensity plots well, but Rosenberg manages to make this issue work. The story feels very balanced, even in the midst of its massive battles. I especially enjoyed the fact that every hero on the team manages to steal the spotlight. No one feels totally underutilized in this plot, which works well for a team book. You really get the feeling that while this team doesn’t particularly trust each other, they function perfectly as a unit. This story feels much more militaristic than most of the mutant formula. In this way, Rosenberg has staked a claim on a very unique piece of X-Men lore.

I will say that some of the plot beats went by a little too fast. I didn’t feel like we got enough answers as to why this particular story had to be told. It simply acts as another supernatural mission for the team. Even though the zombies had no motivations in the previous issue, they stemmed from a very meaningful and interesting source. The Frost Giant in NEW MUTANTS: DEAD SOULS #2 never becomes anything more than a set piece. There are no apocalyptic stakes for losing to this monster. I fail to see why this team needed to face this threat. Also, Illyana again comes to an answer almost too fast. After struggling against the monster for most of the book, she barely struggles in their second encounter, which saps some credibility from the plot.

Adam Gorham brings his hyper-energetic art style back for NEW MUTANTS: DEAD SOULS #2. I found his work to be the strongest aspect of the previous issue, and that continues here. Outside of his fantastic battle sequences, I really appreciate Gorham’s varied character designs. No one but Illyana has a truly “superheroic” body type. Most of the team looks like normal people, which grounds the story quite well. Even Strong Guy, who is a hulking behemoth, looks very cartoonish with his spindly little legs. This is a book about incredibly varied personalities. I’m glad that the body types match as well.

Daredevil & Me: A Tale of Representation

Michael Garland also returns to the series with his stellar color work. I took special note of the ways this issue differed from the previous in terms of setting. In the first, Garland painted the world in a lot of dark, warm colors. This led to a very claustrophobic feeling of danger in the world’s atmosphere. In NEW MUTANTS: DEAD SOULS #2, though, the plot takes the characters to a snowy setting in Russia. Naturally, this leads to a very blue color palette, but I never felt like Garland lost sense of the darker atmosphere. This series seems to take a lot of cues from horror narratives, and Garland’s work is key in making this atmosphere come about.

NEW MUTANTS: DEAD SOULS #2 doesn’t deliver a perfect story. Some of its team members struggle to find their personality in this issue, and some of its plot beats lead to some confusion. However, this issue does deliver an entertaining action story with some fantastic art. Rosenberg’s team has instilled in me quite a bit of hope. As long as these creators continue refining this story and polishing the characterization, this series has a bright future ahead of it. Rosenberg has already pushed this story in a stronger direction, and I hope that it only continues to improve.