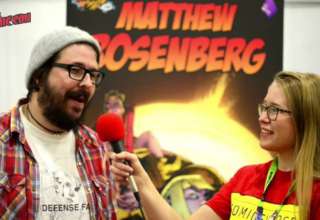 In recent years, writer Matthew Rosenberg has made huge leaps in the comic industry. He has quickly become one of the most recognizable names in the business. While he works on a variety of projects, from his recent Image series WHAT’S THE FURTHEST PLACE FROM HERE? to the horror series 12 REASONS TO DIE, most of Rosenberg’s work is with Marvel.

In the last year, Rosenberg has focused on the world of the X-Men. His work includes series such as PHOENIX RESURRECTION, MULTIPLE MAN, and THE NEW MUTANTS: DEAD SOULS. For a relatively new writer, Rosenberg has shaped much of the current X-Men world and will continue with the new UNCANNY X-MEN series.

At NYCC 2018, I had the opportunity to talk to Rosenberg about his current projects. We cover a lot of different topics, but he got the most enjoyment from talking about the X-Men. As a huge X-Men fan, I gravitated towards asking him questions about the various X-Men characters he’s been able to write over the years. From Multiple Man to Magik, we talk about how and why he chose to take these characters into new directions. We even cover his more controversial series, PHOENIX RESURRECTION, which brings back Jean Grey after a decade-long hiatus. As sensitive as the topic can be, Rosenberg was more than willing to dive into the subject and explain his thought process behind the series.

Like a lot of writers who feel truly passionate about comics and who grew up reading them, Rosenberg has a lot of respect and reverence for the X-Men. Even though he’s written numerous X-Men series, his position as a writer still amazes him. Rosenberg used old UNCANNY issues to learn how to read and continues to love these characters for years. We understand and appreciate his awe at being a writer.