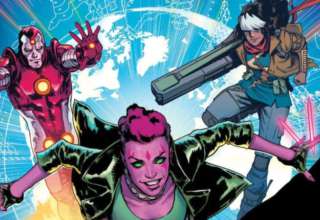 Just a few days into 2018, Marvel has announced the exciting return of THE EXILES. The reboot by writer Saladin Ahmed (BLACK BOLT) and artists Javier Rodriguez (SPIDER-WOMAN), Alvaro Lopez, Jordie Bellaire and Joe Caramagna, will hit shelves on April 11. And don’t expect a rehash of old themes and storylines. Given Ahmed’s refreshingly original work on BLACK BOLT, EXILES #1 promises to be a new take on the Marvel series.

Here’s what we know about EXILES #1 so far. Nick Fury (now the Unseen) is observing Earth from the moon, when he notices a mysterious threat casting its shadow on the multiverse. What can he do? Recruit champions like Blink who can save it, of course. This new team includes Blink, Khan, Iron Lad, Wolvie and a yet unrevealed team member. And they’ll have to work together to fight an evil possibly more sinister of what we’ve seen so far.

According to Ahmed, the new EXILES series will have enough guest stars and “mind-blowing” Easter eggs to keep existing fans of the series happy. But it’s also friendly to new readers, too, he says. That’s good news for newer Marvel fans, who may be familiar with the X-MEN universe, but not with EXILES.

The first issue boasts a pretty stellar creative team. Joining Ahmed and Rodriguez, David Marquez (ALL-NEW X-MEN) is doing the cover, with Mike McKone on the variant cover. The previews (see below) are beautiful. Plus, it’s exciting to see McKone, who co-created the original EXILES series, back in action.

Ahmed himself calls EXILES #1 a “two-fisted, big-hearted wild ride of a book about a diverse team of alternate universe Marvel heroes banding together to stop a dire threat to the multiverse. Sort of WHAT IF? meets classic X-Men.”

That’s a big promise. But given this creative team, it’s a promise that likely will be fulfilled.