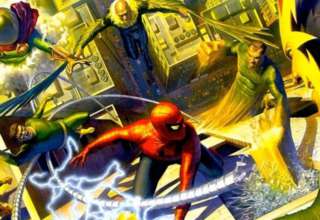 SPIDER-MAN: FAR FROM HOME will mark the start of a new era for the Marvel Cinematic Universe. Post-ENDGAME, there will be a gaping hole where the Infinity Saga currently is. That puts a degree of responsibility on FAR FROM HOME to set the stage for what we are to expect moving forward. Fortunately, Spider-Man’s side of Marvel can rightfully dominate before the arrival of the X-Men and Fantastic Four. What better way to utilize Spidey than to finally bring forth the Sinister Six?

Honestly, it is a long time coming. Sony has been trying to create the super-villain squad for nearly ten years, starting with their AMAZING SPIDER-MAN films. Way back in 2014, they even gave a teaser at the end of ASM 2 for a Sinister Six movie. The film turned out to be, however, a critical failure. Consequently, Sony not only abandoned the Sinister Six, but even gave partial control over the character of Spider-Man to Marvel Studios in time for CAPTAIN AMERICA: CIVIL WAR.

However, now that Spider-Man is part of the MCU, we can expect the franchise to push forward in the direction of the villain team. Check out the mid-credits scene of SPIDER-MAN: HOMECOMING; Mac Gargan practically spells out for the audience that it’s really going to happen!

The Sinister Six has appeared in Marvel Comics since AMAZING SPIDER-MAN ANNUAL #1 (1964). They circulate through many members, all of which harbor a special hatred for Spidey. I believe that the following six bad guys can make the perfect team for the MCU.

The Vulture, aka Adrian Toomes, is already a central character in the current film canon. Michael Keaton plays Toomes with a down-to-earth cynicism that distinguishes him from those villains focused on lofty, world-ending goals. Toomes is a scavenger (much like a real vulture), repurposing scraps and abandoned tech into tools to provide for his wife and daughter.

How to Approach Vulture

He fills the niche of the bad guy who might have lived a different life given different circumstances. He could even bring some dramatic intrigue being the only Sinister Six member who knows the identity of Spider-Man. His inclusion is the best place to take the Vulture character after he inevitably breaks out of prison with…

Scorpion, the Wildcard Maniac of the Team

This Spidey villain is not quite as relatable as Toomes. Scorpion (also known as Mac Gargan) is portrayed in both the comics and the MCU as a homicidal criminal. In his original depiction, Gargan is a private investigator who takes orders from J. Jonah Jameson of the Daily Bugle. Jameson hires him to figure out how Peter Parker can take such amazing shots of Spider-Man. JJJ hires him again to participate in an experimental procedure with the goal of taking down Spidey, despite failing as a detective. Gargan’s genetics fuse with that of a scorpion, turning him into a predatory psychopath.

How to Approach Scorpion

In the Marvel Cinematic Universe, Michael Mando’s Gargan is a weapons dealer with a big scorpion tattoo on his neck. In SPIDER-MAN: HOMECOMING, his illegal business with Vulture is thwarted by Spider-Man, resulting in his imprisonment and facial scarring. His last scene at the end of the film indicates his bloodthirstiness, but also his involvement in a vague alliance of Spidey-haters:

“I’ve got some boys on the outside who would love to meet him. You know, take a picture, slice his throat, put his head in a dryer.”

After he says this, it seems obvious that Scorpion is a member of the Marvel Cinematic Universe version of the Sinister Six. You know who else is an obvious addition?

Mysterio, the Trickster of FAR FROM HOME

Here we move into FAR FROM HOME territory. Mysterio is a special-effects-guru-stuntman-turned-criminal. In the comics, Quentin Beck longs for the fame and recognition of a movie star or superhero. Just as any well-adjusted adult does, he decides to frame Spider-Man for multiple crimes. This gives him the opportunity to announce himself as the magical hero Mysterio, ready to bring the wallcrawler to justice. His skillset allows him to cast illusions, set traps, and create vast amounts of disorientation.

How to Approach Mysterio

He’s already appearing in the upcoming SPIDER-MAN: FAR FROM HOME, to be played by the very talented Jake Gyllenhaal. In the trailers to the aforementioned movie, he seems to be following a similar origin to his comics incarnation. Mysterio seems to be posing as a hero, fighting off elemental monsters that I predict to be special effects fabrications.

At the same time, another villain is rumored to be in FAR FROM HOME. That is…

The Chameleon aka Dmitri Smerdyakov is Spider-Man’s first villain, appearing in AMAZING SPIDER-MAN #1. He is a master of disguise, able to embody the voice and mannerisms of anyone he sees. Additionally, later stories of the character gives him a Skrull-like power to shapeshift. While not overly powerful or showy, Chameleon complements the Sinister Six as the stealthy super spy of the group, relying more on his intelligence than brute strength. The character is not a usual staple of the Marvel team, but this Sinister Six team reflects the more grounded reality of the MCU.

How to Approach Chameleon

Interestingly, there is a rumor floating around the internet that Chameleon is going to appear in FAR FROM HOME. Actor Numan Acar is listed on IMDB playing a character conspicuously named Dmitri. There is no direct confirmation that this is The Chameleon, but a surprise like that wouldn’t be revealed before the film’s release. I can only hope that Dmitri’s inclusion to the MCU also brings about his half-brother, known as…

Kraven the Hunter, the Brawn of the MCU Sinister Six

Taking the spot of the most buff Sinister Six member, Sergei Kravinoff is a bad guy with a singular desire: hunt down Spider-Man like an animal. Born to an old Russian aristocratic family, Kraven spends his life taking down dangerous beasts and killing them with his bare hands. He regularly takes a potion that enhances his strength, endurance, senses, and durability in addition to his skills as a hand-to-hand fighter. He wears a male lion’s head as a vest, if that’s any indication that he takes pride in his murdering of animals.

Kraven figures his next step is to hunt down a super-powered human being, namely Spider-Man. For example, in the comic run SPIDER-MAN: KRAVEN’S LAST HUNT, the villain becomes so obsessed with killing his arch nemesis that he tranquilizes him, and buries him alive. After this, Kraven spends the next night maniacally parading around New York dressed as Spider-Man before taking his own life.

How to Approach Kraven

In my proposed Sinister Six, I would like Kraven to be introduced in a third Spider-Man MCU movie. As Chameleon is an established member by now, I can see Dmitri contacting his half-brother to provide the muscle for this Spidey-killing operation. The actor needs to be tall, intimidating, and bulky. I want him to tower over Tom Holland like any person looms over their pet.

Actor Joe Manganiello meets two important qualifications for this role. First, he’s 6’5”, which is certainly tall enough when you compare him to the 5’8” Tom Holland. Second, he is already familiar with the world of comic book movies, having played Deathstroke in Justice League and Flash Thompson in the original Sam Raimi trilogy of Spider-Man movies.

Doctor Octopus, the Brains of the MCU Sinister Six

Speaking of the Sam Raimi trilogy, I hope I’m not the only one who thinks that Alfred Molina’s Doctor Octopus is one of the greatest parts of those films. Originally a brilliant scientist, Otto Octavius is caught in a terrible explosion that damages his brain and fuses four controllable metal tentacles to his body. He, of course, becomes evil (because this is Silver Age Marvel). As a result, he creates the Sinister Six as an opportunity to kill Spider-Man. Recent depictions of the character in SPIDER-MAN 2 and the video game Marvel’s Spider-Man for PS4 give him a layer of tragedy.

For example, Molina’s portrayal paints him as a goodhearted man with a loving relationship with his wife. Just like in the comics, a massive explosion befalls him. Consequently, his wife dies in the aftermath. His artificially intelligent mechanical arms drive him mad with delusions of grandeur. As a result, he threatens to unleash a miniature sun on Earth in a misguided attempt to feed his ego. Octavius manages to redeem himself by the end of the movie, however, with the help of Spidey.

In the video game Marvel’s Spider-Man, Peter Parker is an assistant to Octavius in his lab. They share a special friendship that is repeatedly tested throughout the game. Over the course of the story, Octavius’ hidden neurological condition encourages him to rely more on barely tested tech implants, which in turn negatively affects his personality.

How to Approach Doc Ock

Octavius is well-suited in this plan to appear in the third Spider-Man movie, just like Kraven. A great Doctor Octopus needs to be played by an actor who can portray intelligence, charisma, nerdiness, and megalomania all at the same time. Mark Hamill can do it. He is a great actor with tremendous range in a whole assortment of geeky productions (STAR WARS, BATMAN, and THE FLASH, for example).

Where Does the Sinister Six Marvel is Building Go From Here?

Now that we have our team, what do we do with them now? My proposal is that Spider-Man loses to the Sinister Six in the third Spidey movie. Shocking, I know! However, in the next Avengers film, the supervillain team fights against Spider-Man and five of his superpowered teammates. Of course, here we learn that Bryan Cranston’s Norman Osborn is bankrolling the Sinister Six; in addition, he also takes over the old Stark Tower in Manhattan.

Above all, I think this idea is incredibly fun, and can bring the Sinister Six to the big screen in a way we all deserve.