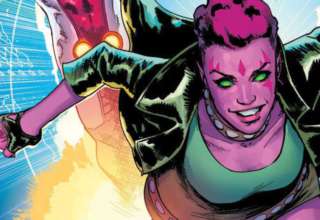 Blink returns in the newest Fresh Start series, EXILES #1! Writer Saladin Ahmed (BLACK BOLT) and artists Javier Rodriguez (SPIDER-WOMAN) and Alvaro Lopez tackle the dimension-hopping team. The roster for EXILES includes the classic pink-haired leader Blink along with Khan, Iron Lad, Wolvie, and Valkyrie. The possibilities are endless with this new series that, according to Ahmed, is “full of deep-cut guest stars and mind-blowing easter eggs.”

In response to what readers can expect from the series, Ahmed says:

“EXILES is my take on a classic Marvel ‘misfit’ team book, powered by the endless possibilities of alternate timeline craziness. Sort of WHAT IF? meets classic X-MEN, with a bit of QUANTUM LEAP tossed in for good measure.”

Marvel’s THE EXILES are Back … with Blink!

In the past, the Exiles have represented the misfit heroes that don’t fit on other teams. While the roster for EXILES #1 is dramatically different from past series, the idea of “misfits coming together, learning to trust each other, and, if they’re lucky, saving the world(s),” (as Ahmed puts it) is still there. One of the most notable changes to the original Exiles roster is the absence of Morph. He, along with Blink, are the only original Exiles members who’ve been in every series (until this one).

Thankfully, some things haven’t changed. According to the creative team, the wild and colorful adventures the Exiles are known for will be a prime plot point in the new series. Different planets, alternate realities, and far off dimensions are Blink’s playground in EXILES #1. Still, the Marvel universe isn’t the same as it was in 2009, after the cancellation of the last Exiles series.

So much has changed, but I think the misfit team will fit in perfectly with the other Fresh Start series that have been announced. Since Fresh Start series DEADPOOL and DOMINO also feature misfit characters, it seems like Marvel is trying to stress the importance of characters who don’t fit the classic superhero stereotype. This is a promising development that will hopefully be noticeable in EXILES. Don’t miss the first issue of the exciting new series, coming April 11. Check out the opening pages of the issue below!