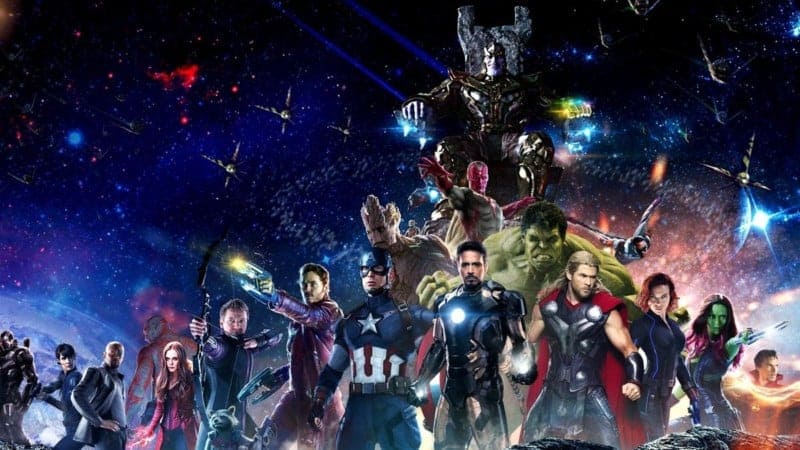 It’s no secret that AVENGERS: INFINITY WAR has been in the making for ten years. Ever since the first IRON MAN movie, Marvel has been building up a cinematic universe unlike anything before. Working up to THE AVENGERS (2012) was a feat in of itself. It wouldn’t have been completely out of the ordinary for another company to stop there, instead of creating the Marvel Cinematic Universe.

However, once Thanos’ presence in the universe started getting hinted at through end-credit scenes and cameos, it was clear that the Marvel Cinematic Universe had much loftier goals. But how have the last ten years of superhero films changed the way we watch movies?

When you Google “cinematic universe,” the Marvel Cinematic Universe is pretty much the only result that comes up. It wouldn’t necessarily be an exaggeration to say that the MCU boasts the most successful universe in the modern era. It’s difficult to come up with any recent franchises with the same level of success as the MCU.

Cinematic universes are not an entirely new phenomenon. As early as the 1920s, Universal Studios had the UNIVERSAL MONSTERS. The universe was a succession of movies starring classic monsters like the Phantom of the Opera, Dracula, and Frankenstein. The movies featured recurring characters and cast members, though they never joined up in one massive monster crossover. Probably because they almost always died at the end.

Shout out to Mary Shelley. Image courtesy of Universal Studios.

The effect of the MCU on modern movies is similar to the effect of HARRY POTTER choosing to split the seventh book into two films. After that, every big YA film adaptation split the last book into two parts whether the book warranted it or not. Since the MCU started gaining steam rather than spectacularly crashing and burning, other production companies like Warner Brothers and Universal Studios tried their own hand at it.

The DCEU films have been burdened from the get-go in their attempts to catch up to Marvel’s long game. Universal Studios debuted the Dark Universe, a kind of reboot of their UNIVERSE MONSTERS, with THE MUMMY in 2017. However, the film was unsuccessful and no recent news has come out about the project. These days, you’re much more likely to walk into a film part of a larger universe than a standalone.

GREEN LANTERN: How Not To Start A Cinematic Universe

Wait, How Many Movies Do You Need To Watch?

To the ultimate casual viewer, THE AVENGERS, AVENGERS: AGE OF ULTRON, and AVENGERS: INFINITY WAR is the most confusing trilogy of all time. In a different situation, three movies with similar titles like this would be related, at least in the plot.

But unless you saw CAPTAIN AMERICA: CIVIL WAR (a.k.a. AVENGERS 2.5), you’d have no idea why Iron Man and Captain America aren’t speaking, why Cap is suddenly a fugitive, why Bucky is in Wakanda, and what Wakanda even is in the first place in INFINITY WAR.

That’s a lot of information to be lacking heading into a franchise-defining event like INFINITY WAR.

Me trying to remember the plot of every Marvel movie before INFINITY WAR. Image courtesy of Marvel Entertainment.

Here are the movies you (probably) need to see to get the most out of INFINITY WAR: THOR RAGNAROK, both GUARDIANS OF THE GALAXY films, CAPTAIN AMERICA: CIVIL WAR, and DR. STRANGE. An argument can definitely be made for why any film in Marvel’s oeuvre should be included, but these specific movies make the most sense for plot reasons.

The MCU normalized viewing dozens of barely related movies for payoff years in the future. Trilogies and film series adapting popular novels, like HARRY POTTER, TWILIGHT, and LORD OF THE RINGS, worked under the obvious assumption that viewers should see the previous movies before the release of the newest installation.

That makes sense. But seeing a random movie starring a talking raccoon and a sentient tree in order for a film event to make sense? And not just one seemingly random movie, but multiple? How can Marvel expect that from their audience? Simple: treat it like a TV show.

The MCU: Television On The Big Screen

AVENGERS: INFINITY WAR has been primarily criticized for the fact that it barely manages to stand up on its own. The film opens directly after the end-credit scene of THOR RAGNAROK with little to no explanation to unfamiliar viewers. Most recently, a review in The New Yorker  knocked the film for having characters that “just show up” whose behavior

“is entirely defined by the template set for them in other movies.”

James Gunn, co-writer, and director of the GUARDIANS OF THE GALAXY films remarked that the review was similar to criticizing GAME OF THRONES for not properly introducing characters eight seasons in.

Imagine the context needed for this photo. Image courtesy of Marvel Entertainment

While it’s not unreasonable for a viewer to expect a movie to stand on its own, it’s interesting to consider how the MCU functions as a really large television franchise. In an article in Vanity Fair, Marvel Studios president Kevin Feige framed INFINITY WAR pre-release as a grand finale:

“Great television series do that all the time. That can be some of the best—when done well — some of the best episodes of the whole thing. We thought it would be fun to do that.”

In some ways, the MCU does work like a TV show. The end-credit scenes are similar to the NEXT WEEK ON: portion of most shows. The Marvel movies cater themselves well to the new culture of binging entire shows on Netflix the minute they’re released — which many fans did to prepare for INFINITY WAR.

What to Read After Seeing AVENGERS: INFINITY WAR

The Cultural Significance of the Marvel Cinematic Universe

Like how the concept of a cinematic universe isn’t a novel idea, neither is the prototypical superhero movie. The original SUPERMAN films were iconic in their own right, establishing a set of life-long fans. The original X-MEN and SPIDER-MAN films worked similarly but functioned in their own separate worlds.

In fact, it is the success of these earlier franchises that created a foothold for the Marvel cinematic universe. Until Marvel’s recent deal with Sony, it had seemed unlikely that Spider-Man would ever join the MCU. When he did, the choice was lauded by fans everywhere as a literal “homecoming.”

It is the motivator (plus, you know, money) for Disney’s pursuit of a deal with 21st Century Fox.

It’s safe to say that the films contained in the Marvel Cinematic Universe are part of the cultural vocabulary. Now, more than ever, you can go up to a random person, mention a superhero, and expect a level of familiarity. Conventions like Comic-Con thrive off this expectations.

Conventions feature A-list celebrities and exclusive previews of upcoming films while raking in millions of dollars. I mean, the Russo brothers were able to spread a no-spoilers rule with #ThanosDemandsYourSilence. How often does something like that happen?