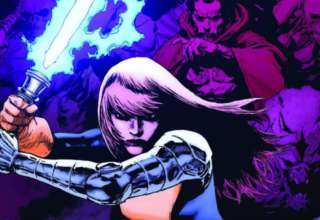 “This March, a paranormal mystery will be unleashed in the Marvel Universe…and only the members of the NEW MUTANTS can stop it! In celebration of this six-issue limited series from writer Matt Rosenberg and artist Adam Gorham, Marvel is excited to announce the NEW MUTANT VARIANT COVER PROGRAM, featuring dark portraits of your favorite Marvel heroes from acclaimed artists such as Dan Mora, Declan Shalvey, Mike Deodato and more.”

Variant covers will be released for the following series:

Recently signing an exclusive contract with Marvel, Matt Rosenberg is writing the weekly PHOENIX RESURRECTION, to usher in the return of the original Jean Grey. In addition, Rosenberg is writing TALES OF SUSPENSE, a limited series as part of Marvel Legacy. Rosenberg is also well known for his creator-owned series 4 KIDS WALK INTO A BANK and WE CAN NEVER GO HOME, published by Black Mask Studios. Also on NEW MUTANTS: DEAD SOULS is artist Adam Gorham, a prolific cover artist for multiple publishers, as well as being the series artist for Marvel’s ROCKET.

Though NEW MUTANTS: DEAD SOULS does not yet have a release date, here’s what we do know. It will be a six-issue series that follows Magik, Wolfsbane, Rictor, Boom Boom, and Strong Guy, brought together by Karma to investigate paranormal events happening in the universe. Additionally, each issue will be a standalone story. As the variant covers show, the series may take on a darker tone like the NEW MUTANTS movie out this April. Look out for the NEW MUTANTS variant covers this March!