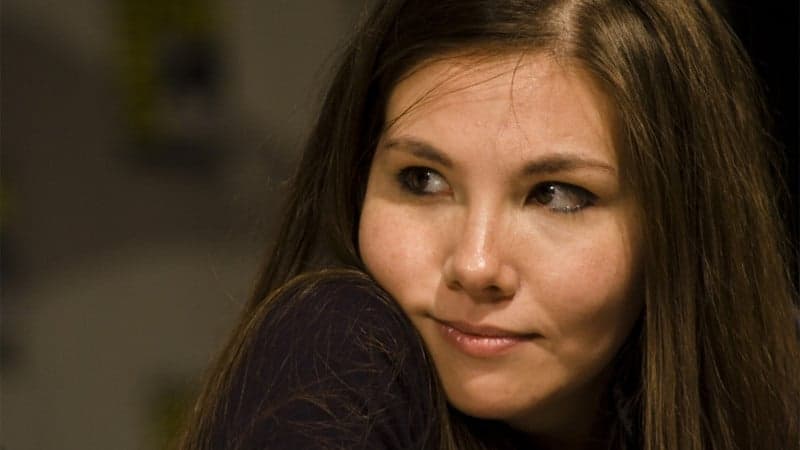 Marjorie Liu talks to Rachel Davis about her identity, the X-MEN, and MONSTRESS at NYCC 2017! For your convenience, you can also listen to the audio for this interview on iTunes!  In addition, you can find a transcript of the audio below!

Rachel Davis: Welcome to New York Comic-Con 2017. My name is Rachel Davis, with me is the living legend, Marjorie Liu.

Marjorie Liu: I sound so old.

Marjorie Liu: It’s going great, how about you?

Rachel Davis: Going really well. I’m so excited to interview you, and I’m sure our listeners are too.

Rachel Davis: Let’s go there. Okay, so Marjorie, I’m sure you’ve talked a lot about how you transitioned from trying to be a lawyer to becoming a creative writer and storyteller. Was creative writing something you were always passionate about, or you something you found after finding that being a lawyer wasn’t for you? You did fanfiction at one point, I remember.

Marjorie Liu: I did, I did fan fiction for many years. Basically in college and law school. As to your first question, I was always passionate about reading first. Personally, I was a very passionate reader, and because of that, I fell in love with words; I don’t think I started out wanting to be a writer, but because I love reading so much, and because I love stories, I began to want to tell my own stories.

I think I become more deeply invested in the fiction I was reading. Early on I was creating fan fiction in my head about my favorite novels and things like that. It was originally based off of fairy tales and things like that. Then as I got older, and by older I mean, by the time I was 10 or 11, I was dreaming up my own original stories. My own original adventures. I was a kid who lived really deeply in my imagination. That writing, being a creative writer, was just a way for me to do more of that.

Rachel Davis: Absolutely. Thank you for that, I was the same way as a kid. For MONSTRESS, you can arguably say that there are heavy, feudal Japan, and other Asian culture influences imbued in the writing. Is this for any particular reason for the story or just a personal affinity? Why did you choose those influences?

Marjorie Liu:  Oh, wow. Well, I mean, I’m mixed race, I’m half Chinese. I spent a ton of time growing up with my Chinese family. It just felt natural. Growing up I never read any epic fantasy … I was obsessed with epic fantasy, but I never read epic fantasies that I felt like portrayed, I don’t know, that I felt like had any Asian themes as something more than stereotype or a backdrop to give a book exotic, an exotic taste. We’re not just some exotic taste, right? There were never any Asian protagonists in the epic fantasies, anyone that I could really identify with.

I would imagine these characters as being mixed race like me, but I knew that on paper they were being written as white. I really wanted to create something that both reflected what I would’ve loved to see as a young woman of color. A mixed-race protagonist, a world in which everyone is mixed race or a person of color. I wanted to see a fantasy world that took in all these hybridic elements of Asia. That I was all these elements that I was familiar with because of my childhood, and my travels, and put that in a fantasy in a very real way that wasn’t just a cliché.

Rachel Davis: I’m sorry, I’m half black and half white, and I almost wanted to cry. This is not going to make the final cut, but thank you for what you doing.

Marjorie Liu: No, thank you.

Rachel Davis: I know exactly what you’re saying. Thank you. Okay, so back to the interview. Correct me if I’m wrong, but I believe I read somewhere that you knew about the X-Men because of the animated TV show. Is there fanfiction?

Marjorie Liu: You better believe it. I watched the cartoon in the 90’s.

Rachel Davis: Oh my goodness yes. That was a jumping off point for your work under Marvel, like for X-23. Do you think X-23 might be your favorite X-Man, or do you feel strongly about any other?

Marjorie Liu: Oh, wow, it’s hard. I think X-23 is my favorite X-Man. I think she’s definitely the one that I identify with the most. Before her, I would’ve said that I identified most with Jubilee, because she was, again, this Asian American character in a sea of whiteness. When I saw her in the cartoon, I was like, “Oh my gosh, she’s like a Californian, mall-rat Asian American kid.” I was from the West Coast, and I was like, “Oh, damn, I love her, I love her.”

It’ll be a hard toss up between Jubilee and X-23. I mean, I love Jubilee for what she meant to me growing up, but X-23 is a character, when I wrote her, I really identified so strongly with her because I felt like that this was a young woman, like many young women, who had been raised to believe that she was supposed to be one thing and that her choice had been stripped from her. That her journey was one of learning how to make choices for herself and learning how to discover her own agency and to become her own person. I think that’s something that a lot of young women, well young and old, still have to wrestle with.

Rachel Davis: Absolutely, yes. Now, what was your opinion on LOGAN? I’m going off script now, but what were your thoughts on LOGAN and the relationship there?

Marjorie Liu: I really enjoyed LOGAN. I really love seeing X-23 on the big screen. I’m an old softie, so the ending was, you know. Maybe I would have suggested a different ending, but that’s just because I’m an old softie.

Rachel Davis: Sure, yes, thank you. It appears that you’re now teaching a class on comic book storytelling at MIT.

Rachel Davis: Did you think that would go through such a transformation from lawyer to writer to teacher? I mean you’ve had quite a journey.

Marjorie Liu: If you had told me back in 2003 that I would be a novelist, a comic book writer, and a teacher at MIT, a lecturer, I would’ve said you’re crazy. That would’ve been a fantasy. Way more of a fantasy than the X-Men. That’s like, “No, that’s not possible.”

Rachel Davis: You were more likely to get adamantium claws than becoming a teacher.

Rachel Davis: What have you learned about yourself through the success of your writing and comic books, and through being a creator, and owning your own creation for MONSTRESS?

Marjorie Liu: Wow, what have I learned about myself? Oh, wow. I mean, what I’ve learned is something that in some ways it’s a lesson that’s been reinforced over and over again throughout my life which is that you never stop learning. You never stop learning. That as soon as you think you’ve got something nailed down, life will come along and show that no, you still have a lot more to learn.

That was the case for me when writing MONSTRESS because even though I’d written the X-MEN, I’d written all these comics for Marvel, I was lulled into a false sense of security where I thought I knew my shit when it came to writing comics. I thought I knew what to do. The truth was I didn’t.

Writing the X-MEN was very different. It was from writing my own create your own comic. Writing the X-MEN was all about playing in someone else’s sandbox and writing in a world that had already been made and that was pretty similar to our own. MONSTRESS is its own creation. MONSTRESS is an epic fantasy. I had to relearn how to write comics and I had to relearn how to tell stories in the comic book medium in a way that would allow me to create this world and these characters.

Rachel Davis: Do we have time for one more question? I’m sorry.

Rachel Davis: Thank you. You seem to write fantasy and action very well and using that genre as a framework for bigger issues like racism, prejudice, and government exploitation. Do you use this genre purposely, or do you feel that your discussion of these issues is the most important?

Marjorie Liu: Oh, I love fantasy. I love fantasy. At the same time, fantasy is a very useful tool of estrangement. Yeah, it’s like, MONSTRESS is filled with some very difficult themes. Themes about race, themes about colonialism, slavery, misogyny, patriarchy, but because it’s cast in a fantasy world, it’s I think easier not just for the reader but for me as an artist to think about these things.

If I tried myself to write a straight-up novel set in this world about these ideas, I think I personally would have a very difficult time. Even as an artist it’s easier for me to think about these things with a level of estrangement, to put them in terms of fantasy, put them in terms of witches, and talking cats, and the ideas are still there, but again, it’s couched in magic. That’s a very useful tool.

Rachel Davis: Yeah, thank you so much for your time, Marjorie.

Marjorie Liu: No, thank you, I appreciate it.

Rachel Davis: For more interviews as well as reviews, analyses and other content, make sure to check out ComicsVerse.com. My name is Rachel Davis, and I’ll see you next time.