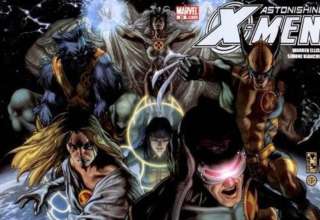 Astonishing X-Men #25 began a new era in what many X-Fans dubbed the Strongest X-Men Title In a Decade. In twenty-four issues–and one Giant-Size special–Joss Whedon and John Cassaday told not only a memorable X-Men tale, but a story that will stand the test of time as one of the great comic book stories of the modern age. It may sound like hyperbole, but I do not doubt that most fans of the book would agree.

That said, the same fans were left in doubt when it was announced that Whedon’s and Cassaday’s departure from the title would not be the end of the Astonishing X-Men. In the months following the release of Giant-Size Astonishing X-Men #1, Marvel revealed that Warren Ellis and Simone Bianchi would take over with issue twenty-five–the solicitation for which promised big science, big action, and the overall continued greatness of the title. It was with these promises in mind–as well as a love for Ellis’s work on newuniversal–that I dove into the new era of Astonishing for the six-issue arc entitled “Ghost Box”.

First, I must comment on the creative direction, as it was the first thing I took note of when reading the early issues. The first chapter of the arc immediately gave me strong impressions concerning the creative team. Bianchi’s painterly steampunk style provided a great and refreshing contrast to Cassaday’s work, perfectly suiting the science-driven story told by Ellis. Both creators worked together quite smoothly to present the cast–Cyclops, Emma Frost, Wolverine, Beast, Armor, and new arrival Storm–with appearances and characterizations that were not unfamiliar. Ellis provided some especially charming moments for Armor, Beast, and Frost.

The SFPD contact our heroes, requesting a consult on a case–a burning man found in the back a store. With Wolverine’s help Beast procures a tissue sample–after, of course, Storm has done away with the fire; and did I mention the dead man was floating?–and studies it upon return to X-Base Alpha. This is where the science really starts, as the dead man was a mutant. Not the average mutant, however–a mutant with three sets of chromosomes and an artificial x-gene on chromosome 66, making him a triploid. As normal mutants are diploids (having two chromosome sets, the x-gene being on chromosome 23), functioning triploids are artificial mutants and never occur in nature. And so the mystery begins. Along with the dead triploid, the police have a bag containing some personal effects including a notebook. Emma Front does some quick reading to discover that the triploid had been following his killer, dubbed “Subject X”. Subject X was making his way to Charparagna, the spaceship graveyard. The X-Men, sans Beast, gear up and board the new X-Plane (prompting X-Plane and X-Cave jokes from Armor) to go investigate. Using her mental abilities, Frost locates the ship in which Subject X has hidden himself. Armor promptly throws Wolverine in, as Colossus (completely absent from the title, even now) might have done. Upon quick investigation, Wolverine locates X who is attempting to repair what is later identified as a ghost box.

The team joins Wolverine as X attacks (Did I mention X is pyrokine? Well, he is. He can set fire to anything by simply thinking about it.). When it becomes clear to X that he is out numbered and doesn’t stand a chance, he kills himself before the X-Men can extract any information from him. The team take the box and a blood sample from X and return to base, where Beast studies the materials and the notes acquired earlier, determining that X was also a manufactured mutant with an x-gene on the wrong chromosome and the murder of the triploid was part of a secret war between the two factions of fake mutants. Unsure of what the box is, Beast calls in Agent Brand of S.W.O.R.D. (Sentient World Observation and Response Department), much to the dismay of Cyclops. Brand explains that the ghost box is a device used to travel between dimensions–a fact that leads to Brand declaring the situation S.W.O.R.D. business. Cyclops fights for the case to remain X-Men business, to which Brand eventually gives in.

X’s notes also referred to a place called Tian (“Heaven”),a mysterious location in China shielded by technology that renders it invisible to anything but the naked eyes. This piques Wolverine’s interest and the X-Men make it their next destination, this time taking Beast with them. Upon their arrival at Tian (a series of small floating islands), they split into three groups–Cyclops and Beast, Storm and Frost, Wolverine and Armor. Several dead, but perfectly preserved, bodies are found and discovered to be the Chinese X-Men, who died after M-Day. Each team encounters (and takes down) a triploid. Quick questioning and a mental scan reveal that the triploids have one thing in common–their creator: Forge. They hurry to the hideout of Forge, somewhere in the side of a mountain, and question him. He reveals to them that he has been creating mutants (the triploids) to defend the planet from the mutants who have traveled to their dimension through ghost boxes (Subject X and another before him). The latter group of mutants were planning to annex our Earth and make it their new home–their own dimension was beginning to tear apart and decay due to the overuse of ghost boxes. After a brief struggle Forge activates the box which the intention of sending the X-Men through to defeat whomever they would encounter on the other side. Before they can be sent through, however, Agent Brand fires a two zettawat canon (two zettawats is roughly ten thousand times the power received by the Earth from the sun) at the box as the X-Men make their escape, destroying whatever was on the other end of the ghost box and (presumably) killing Forge.

Thus concludes what I feel is a strong opening arc from Warren Ellis and Simone Bianchi (although issue 30 was Bianchi’s last on the title). There is a mini-series–also written by Ellis–detailing the events of Ghost Box in alternate time-lines wherein everything went wrong. That, however, is another review for another day.