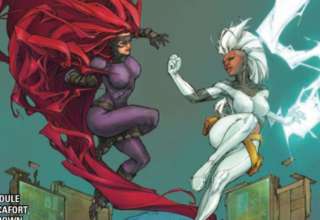 INHUMANS VS X-MEN #0 kicks off what will be an immense event, spanning six titles (including the event’s titular book) from now until March. INHUMANS VS X-MEN will follow both races through their tense Cold War-esque truce and presumably, another enormous conflict. INHUMANS VS X-MEN comes in the wake of DEATH OF X, which revealed the events that occurred eight months prior to the start of MARVEL NOW.

READ: Missed DEATH OF X? Catch up with our review of DEATH OF X #4!

I was unaware that DEATH OF X would span such a finite amount of time. When the series concluded, I was left wondering just what occurred between it and the beginning of MARVEL NOW. After all, there were almost eight months between the two. My answer came in the form of INHUMANS VS X-MEN #0, which chronicles the (first?) eight months of the truce between mutants and Inhumans. The majority of the issue is split between two characters: Beast and Emma Frost. The former teams up with an Inhuman named Iso, combining their intellects in  an effort to find a cure for M-Pox, an often fatal disease in mutants caused by exposure to the Terrigen Mists. Emma Frost, on the other hand, takes a different approach. The White Queen uses the months between DEATH OF X and the start of MARVEL NOW to hone her skills and recruit allies. Frost’s most notable recruit is the time-displaced young Cyclops, whose presence evokes memories of Frost’s recently deceased lover, causing her to shed a tear. The issue closes with Beast standing by his creed, that through science, anything is possible- only stopping the Terrigen Mists from harming mutants is going to be a lot more complicated than anticipated.

LISTEN: Love mutants? Check out the second part of our podcast on THE DARK ANGEL SAGA from Rick Remender’s UNCANNY X-FORCE!

While I’m sure that INHUMANS VS X-MEN will quicken as it goes, INHUMANS VS X-MEN #0’s length far exceeds its minimal plot. The issue stands at a staggering thirty-six pages long, though what it accomplishes could’ve been done in twelve. Despite treading water for at least a dozen pages, writer Charles Soule finds success in characterization. Much like in DEATH OF X, the majority of INHUMANS VS X-MEN #0’s text goes towards fleshing out the characters. I felt as if I got to know Beast and Emma Frost more intimately than the last three years of intermittently encountering them across various titles. In INHUMANS VS X-MEN #0, we are exposed to an Emma Frost we’ve not yet seen, one ensnared in the throes of grief. While her actions in this might be perceived as cold, calculating, and ruthless, upon further consideration it seems as if Emma is using these intensified behaviors to mask the emotional turmoil she sustained as a result of her lover’s death. Frost never demonstrates weakness, and in order to hide her vulnerable state, she devoted herself entirely to further honing her powers and fortifying her physical defenses in preparation of a potential future confrontation with Black Bolt.

The first thing that caught my eye about INHUMANS VS X-MEN #0 were the layouts employed by artist Kenneth Rocafort. While standard panelling dominates comics, Rocafort’s pages include atypical panel shapes and images without panels, as well as a great deal of white space. This white space produces contrasts with the artwork, making the latter pop to readers. Rocafort garnishes panels with small images, often themed around the comic’s setting, in order to enhance the aesthetic experience of the reader. Rocafort’s linework is fraught, yet confident. This style reflects the decisive actions taken by both Beast and Emma Frost amidst the tumult of stressed relations between the mutants and Inhumans. Rocafort’s thin lines give his art a strange sense of realism- a quality often lost or awkwardly implemented in superhero comics. However, Rocafort knocks it out of the park. Colorist Dan Brown contributes to Rocafort’s more-realistic style of art with a muted background palette of greens, blues, browns and greys. Brown’s colors fit the comic’s serious tone, and provide one of INHUMANS VS X-MEN #0’s most redeeming qualities: its aesthetic excellence.

READ: INHUMANS VS X-MEN is already putting a bad taste in our mouth. Find out why!