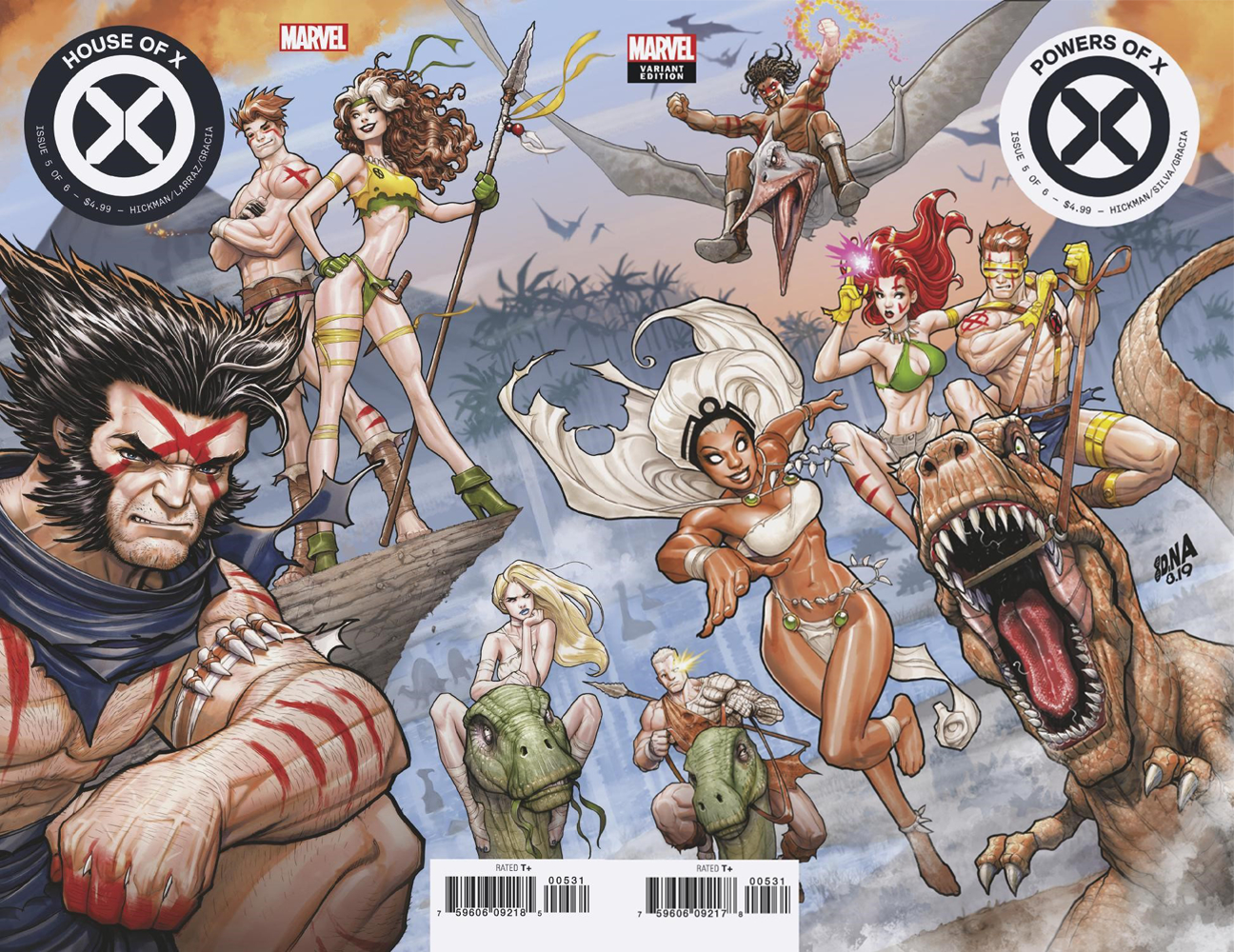 In HOUSE OF X #4, the X-Men made the ultimate sacrifice for the future of mutant-kind. The team gave up their lives to take down the Mothermold before it came online. Now, two weeks later, we finally see what happens after the X-Men’s fatal space mission. On top of that, we are given a deeper insight into Krakoa as a society, as well as Xavier’s plan for mutant-kind. An example of the mutant’s power is presented to us, along with all of Krakoa, in a shocking act in HoX #5. Currently, that power resides in the hands of people who fight for their lives and community. However, in the wrong hands, it could end the entire world. Let’s take a look at what happened in HoX #5 and surmise what may come to pass in the future of this X-Saga!

The Unstoppable Power of Mutant Kind 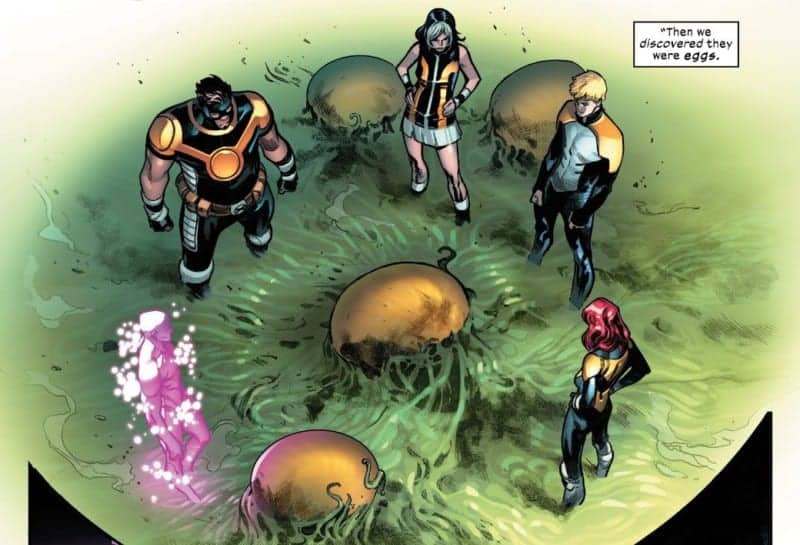 Five Mutants Wielding the Powers of a God, Courtesy of Marvel Comics

The issue opens with the introduction of, quite possibly, the five most important mutants of all time. This team consists of Goldballs, Proteus, Elixir, Tempus, and Hope. Together, along with stored DNA and copied consciousnesses of mutants, these five can use their combined powers to create new life out of dead mutants. They accomplish this by creating eggs inserted with every aspect of a revived mutant. Once the bodies are made, their aging process is sped up to match the mutant’s age. Once the bodies inside the eggs are ready and have hatched, Charles puts the consciousness of that mutant inside their new body. And just like that, it’s as if that mutant never died at all.

One thing to keep in mind: they do not make clones. Clones have minor differences from the original person and become their own person once created, like Ben Reilly or Madelyne Pryor. What the five create are literal re-spawns of fallen heroes. We are given an example of their power when they bring back all the X-Men who died on their space mission to stop Mothermold. That’s right, dry those eyes X-Fans, the X-Men are back! While that’s exciting, the way the X-Men came back could very well mean the end of all mutantkind.

The Birth of a Nation in HoX #5 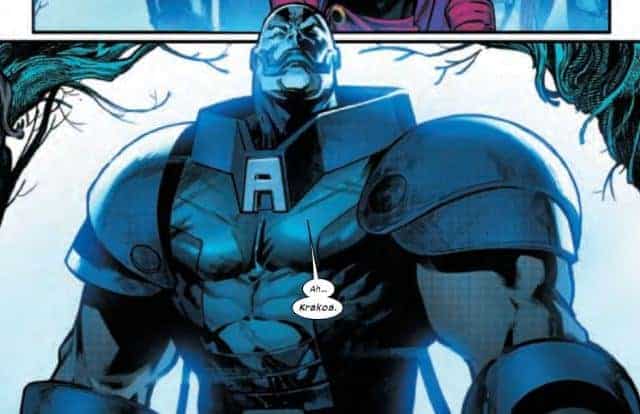 The Arrival of an Old Friend, Courtesy of Marvel Comics

Up until this point, Krakoa was merely in the works to become its own country. In HoX #5, we see the end results of the mutant’s efforts. After the revived X-Men are presented to Krakoa’s citizens, Magneto and Charles discuss the importance of this event the following day. On that day, the United Nations was to take a vote, declaring with certainty whether or not Krakoa will be declared a nation with the same national laws that protect any other world nation. Well, with a little unethical help by one Emma Frost, Krakoa became its own country recognized by the U.N.! Very exciting times for mutants.

After their victory, Xavier decides it’s time to open Krakoa’s doors even further to mutant-kind. As the first of many portals begin to open to Krakoa, we see multiple villains of the X-Men universe stepping through. Perhaps the most intimidating of them all to come to Krakoa is none other than Apocalypse. However, Apocalypse is no stranger to Krakoa. If you remember from our last article, Apocalypse saved Krakoa, along with potentially the rest of the world, by fighting off elder demons that arose from Okkara. In other words, Krakoa remembers Apocalypse and welcomes him back as an old friend. The X-Men, however, are judging Apocalypse on different past memories. 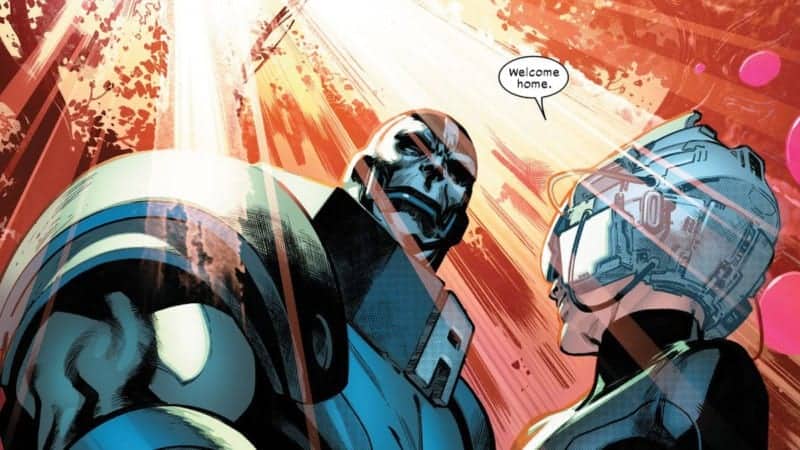 Apocalypse, a Mutant Who Could End the World, Now on the Side of Life, Courtesy of Marvel Comics

The X-Men are unsure of Apocalypse’s loyalty to the nation. Apocalypse, however, eases their anxieties. He tells the mutants that he is proud of what they’ve accomplished and will gladly join them. While this seems a bit out of character for Apocalypse, in truth, it really isn’t. Apocalypse has always believed in survival of the fittest and, on top of that, has believed that mutants are the fittest to survive. He never understood why mutants hid in fear of humans when they could easily destroy them. That mindset led to Apocalypse initiating events such as AGE OF APOCALYPSE, as well as Cable’s future timeline. If mutants couldn’t achieve superiority over humans, then he would do it himself.

However, with the rise of Krakoa, Apocalypse is witnessing mutants, for the first time, taking their rightful place as a world power. And so Apocalypse becomes an ally of Krakoa, thereby making him an ally of the X-Men. Pretty awesome right?! Well, perhaps not. For another villain stepped foot through the portals. One who didn’t get as much panel time as Apocalypse, but who was the main character of last week’s issue of POWERS OF X. Something Sinister has come to Krakoa.

Enter Once Again Into Something Sinister in HoX #5 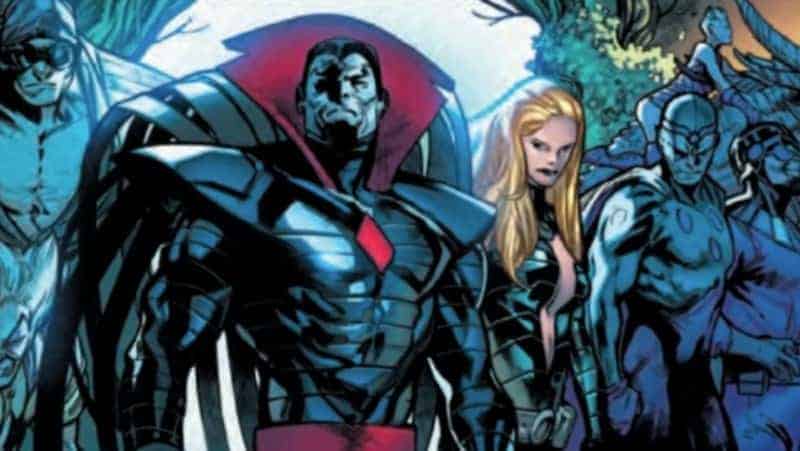 They should Not Have Let this Guy Through, Courtesy of Marvel Comics

With everything that happened in HoX #5, where could the story go from here? In my mind, nothing good. Right now Krakoa has hit its peak. I mean, there’s virtually nothing that can stop mutants at this point! They’ve basically reached immortality, united as one under a nation-state. Heck, the X-Men have Apocalypse on their team! Krakoa has joined the ranks of every great empire that has come before it. Like all great empires, however, I believe the means to their own destruction lies within.

At the end of HoX #5, Krakoa opened its doors to every villain the X-Men have ever faced. While most were on board with the purpose of Krakoa, most notably Apocalypse, we didn’t hear specifically from everyone. Given a panel of his own, and then leaving it at that, we see that Mr. Sinister was allowed on Krakoa as well. And that, my fellow readers, could be the worst thing that Xavier possibly allowed.

Mr. Sinister is the Truest Enemy of Mutant Kind 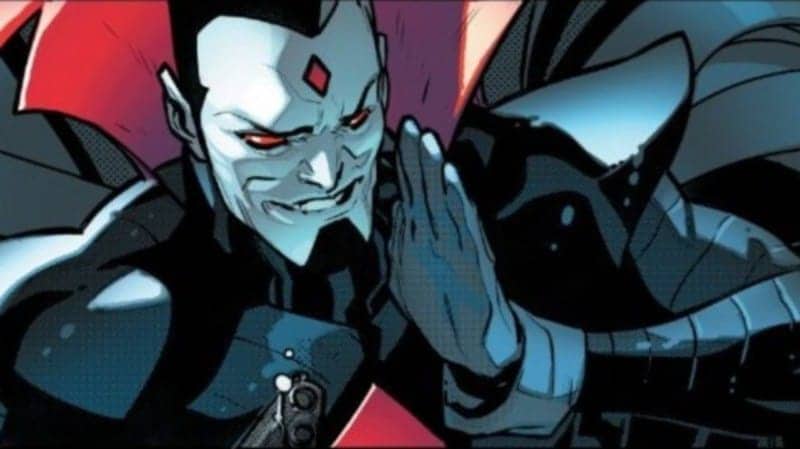 Without Morals or Mercy, Mr. Sinister Truly Lives Up to his Name, Courtesy of Marvel Comics

Something to keep in mind here, Mr. Sinister is NOT a mutant. Born Nataniel Essex in the 1800’s, Essex specialized in the evolution of man and received mutant-like abilities from Apocalypse, becoming the Mr. Sinister we know and love today. But Essex was not born a mutant. In PoX #4, the prime Mr. Sinister we see says he is the one with the mutant gene, but what we learn is that he stole that gene from Thunderbird. The specifics of that event are currently unknown, along with the extent of Sinister’s use of said gene. Therefore, even if Mr. Sinister was able to harness Thunderbird’s X-Gene into himself, his origin story remains.

Mr. Sinister is not a mutant. So, unlike Apocalypse, who has great pride in his brothers and sisters, Mr. Sinister only sees mutants as guinea pigs. He likes to experiment on them, dedicating his life to creating the perfect mutant. However, Mr. Sinister has no respect for mutant life whatsoever beyond his own desires. And that’s before he even knows about the mutant rebirthing eggs…. 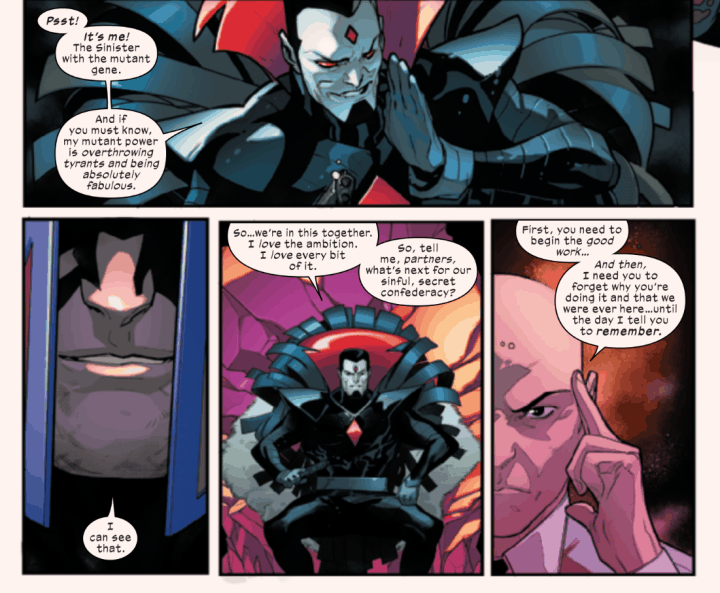 As we saw in PoX #4, Xavier is using Mr. Sinister to catalog the DNA of all mutants while also keeping his mind blocked from the reason why. In HoX #5, Mr. Sinister joins his fellow X-Men villains in coming to Krakoa. As of right now, that is all we know about Mr. Sinister’s involvement. So, with that being said, let’s speculate wildly, shall we?

Because Xavier decided to invite Mr. Sinister, perhaps he believes it is time to let him in on the bigger picture of what Sinister has been doing this whole time. The reason Mr. Sinister is cataloging mutant DNA is in case those mutants need to be brought back to life. Xavier tasked him with that mission and then blocked his mind from remembering that he was tasked at all. As far as Sinister is concerned, he simply wants to catalog the DNA of all mutants. Xavier also said that Sinister would remember being given that mission when he says so. Well, I think Xavier is about to give him that memory back. I mean, he invited him to live on Krakoa with everyone else.

Xavier could let Sinister know why he was doing this: to get him more involved in the mutant rebirth project. Once Mr. Sinister becomes more involved, however, he could do what Mr. Sinister does best: betray them and use that technology to copy his consciousness into other mutants bodies! If he did that, there would be a Sinister-Cyclops, a Sinister-Wolverine, heck, even a Sinister-Apocalypse! And there would be a limitless number of them… him… whatever. Plus, we’ve already seen that he is very comfortable living with multiple versions of himself. 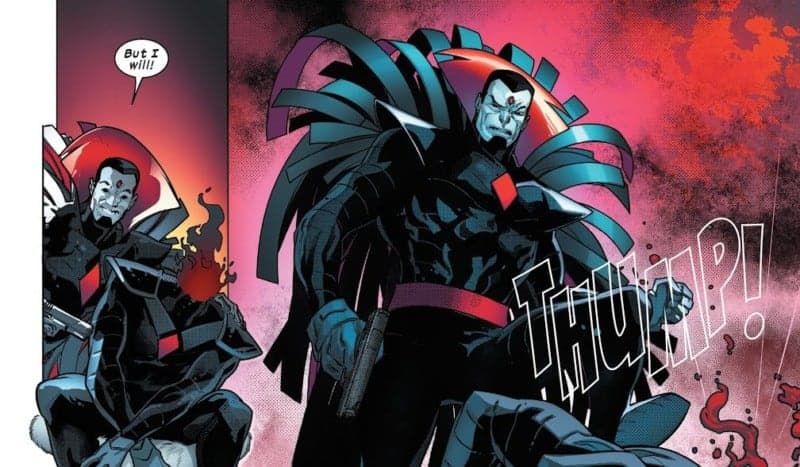 There Can be no Redemption for the Devil Himself, Courtesy of Marvel Comics

Mr. Sinister would be unstoppable using the very technology Charles thought would save mutants. Plus, he’s already betrayed mutant-kind once in the HoX-PoX series. He bred the mutants who eventually turned on everyone and caused the fall of Krakoa in life 9. Given that it is Mr. Sinister, it’s very likely that he would betray mutant-kind once again.

The power of Krakoa’s mutant rebirth project is just too powerful and god-like. Like I said earlier, right now it lies in the power of the good. However, Sinister could be the evil who shows the world why that unnatural process should never have existed at all. 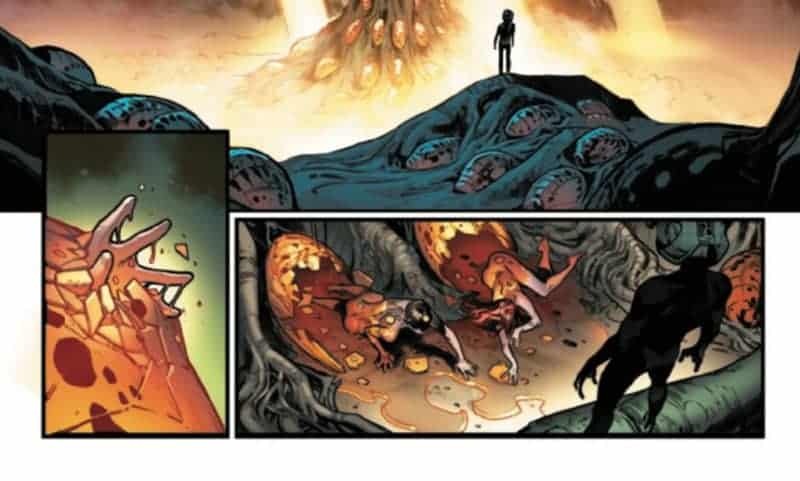 The Power to create Life is Beautiful; to Re-create it is Dangerous, Courtesy of Marvel Comics

HoX #5 brought a lot of things to a close while continuing to set things up for the future. The X-Men are not dead (honestly, thank goodness) and Krakoa has been deemed its own nation by the U.N. Those revelations answer the questions and mark the completion of those stories presented to us in previous books. What else does this book do? HoX #5 shows that mutants can be brought back to life. It shows us that heroes and villains are now working together under the laws of Krakoa, which honestly changes everything.

So, where could this story go from there? There is potential for Mr. Sinister’s betrayal, but nothing is set in stone. Like a true HoX-PoX comic, HoX #5 raises more questions than it answers. The next few issues in this X-Saga are sure to be epic, and HoX #5 ensures that in another amazing X-Men installment!