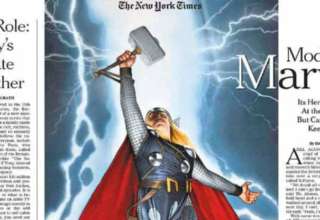 Media outlets like The New York Times have reported on phenomena that shaped America for decades. They spread new ideas — one such idea happened to be the rise of the superhero comic book in American pop culture. In order to show how much comics have risen throughout the years, The New York Times is releasing HISTORY OF COMIC BOOKS. This detailed, high-quality exposé shows how people outside of the comics community came to accept the medium, and how it touched so many people’s lives. When future generations attempt to chart the comic book’s history, they will most certainly turn to this work.

A History Beautifully Compiled by The New York Times

When comic books first started coming out in the early 1900s, nobody knew what they were capable of becoming. They were merely pictures with associated words: something that had been around for centuries. However, as this book shows, the modern form of the comic book revolves around the simple iconography of the superhero. In fact, one of the first news articles in the book, an article from November 22, 1940, indicates as much. As the article, “Superman Struts in Macy Parade,” reports, this was the first time Superman flew in the Macy’s Thanksgiving Day Parade. While this might appear as minor history, it is anything but. The Macy’s Thanksgiving Day Parade is an iconic American tradition. It shows that Superman’s fame exceeds young children buying his comics at newsstands. He’d grown beyond his roots to become a national icon.

Yet it’s not just the likes of Superman that grace the pages of this prestigious periodical. Every page of the HISTORY OF COMIC BOOKS presents multiple different articles about superheroes on its pages. Heroes including Wonder Woman, the X-Men, the Guardian of the Galaxy and many, many more are featured. The ones that the compilers really want the readers to see appear as news clippings in the center of the page. Yet the pages overflow with images of ads, smaller news, and even some cartoons play out in the margins. In many ways, the pages resemble a scrapbook. They appear as loving compilations of instances when a comic book or superhero received a mention in The New York Times — right down to the same affection in the way the clippings get displayed.

However, not all of the news on the page tell tales of superheroism. The editors at The New York Times instead chose to show history unfolding, such as reporting on the Soviet Union. By doing this, the Times grounds a beloved medium in history. For one, it shows how restrictions in what comic books could show replicated a conservative mindset in America.

Take an article from February 4th, 1971 by Laurence van Gelder notes this conservatism and the shift away from it. The article, titled “A Comic Book Magazine Defies Code Bans on Drug Stories,” documents how “for the first time since it’s adoption 16 years ago, the Code of the Comics Magazine Association of America[…]has been overhauled” (van Gelder 37). From then to now, drug use could exist on the colorful panels of popular mainstream comics. By telling these stories, comic books are acknowledging the issues of their decade. No longer do comics settle for simple tales of “good versus evil.” The world of comics and our own is not that simple. No art form ever exists in a vacuum; it always manages to infiltrate everyday lives.

The writer of the forward to this anthology, George Gene Gustines says it best: “My love of superheroes certainly opened up my world[…]when I got to the Times[…]I was able to carve out a niche writing about the ups and downs of the industry[…] shining a light on the different events and exhibitions that celebrate these characters.” If nothing else, articles like the ones in this book show how influential the comic book industry is in the lives of the average American. The HISTORY OF COMIC BOOKS may seem like a series of articles on comic books, but it shows the infectious nature of heroes. For, no matter where heroism comes from, it inspires people young and old, past and present.

THE HISTORY OF COMIC BOOKS is on sale now. This book is available here.